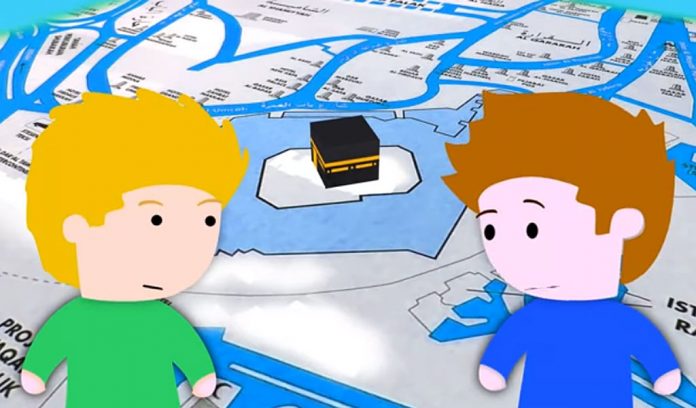 Parents across the U.S. have objected to a Department of Education program called “Access Islam.” The federally-funded program is directed at children from grades 5-12 and is also featured on various websites, including PBS Learning Media.

The Smithsonian also promotes the course as does the Indiana Department of Education and the United Nations.

Parents charge that the course amounts to nothing less than proselytizing about Islam in public schools. In addition, they note that the Department of Education provides no comparable study or promotion of any other religion.

A video from the course prominently features a Christian convert to Islam, who declares emotionally how he has found the true religion without any “intermediaries.”

In addition to videos, students are given worksheets to learn the Five Pillars of Islam and how to pray. Children are also expected to memorize verses from the Quran and know the meaning of those verses.

As part of the school’s “World History” curriculum, high school students in Maryland were taught extensively about Islam — without any context of current events — and required to list the benefits of the religion.

In one homework assignment obtained by a news outlet, the question was asked: “How did Muslim conquerors treat those they conquered?” The correct answer was, “With tolerance, kindness and respect.”

His wife, Melissa, noted, “We cannot discuss our Ten Commandments in school but they can discuss Islam’s Five Pillars?”

The couple asked that their daughter be excused from this part of the curriculum and given an alternative assignment, a request which was refused. The father was told that the assignment must be done or his daughter would receive a zero. Students are allowed to opt out of other modules in the high school, for example, sex education.

Two mothers who spoke up about the courses on Islam that they charge amounted to indoctrination about Islam were smeared with the label of “Islamophobes” after bringing up the issue at a school board meeting.

The mothers objected that their children were required to learn intricacies of Islam but no similar courses were being taught about Christianity or Judaism.

One of the mother’s also noted that her son her was previously censored for proselytizing when he was in fourth grade for a presentation he made about giving to the poor which cited a line from the Bible.

An op-ed written against them for a local newspaper generated a considerable amount of hate mail on social media sites and even animosity at the grocery store.

The following are two examples of the course materials the mothers objected to:

Charges that teaching materials about the Middles East are biased and funded by Saudi, Palestinian, and other Arab states were levied against Newton high schools.

One of the books the schools recommend as reading material included extremist writings by Muslim Brotherhood leaders Sayyid Qutb and Yusuf Qaradawi, who is known for his sermons calling for the murder of Jews and homosexuals.

Public pressure previously forced the high schools to discontinue using the Saudi-funded Arab World Studies Notebook, which makes spurious charges against Israel. The book has been rejected by a number of other school districts as well.

A number of anti-Semitic incidents were reported in Newton high schools during use of the book. School officials, in violation of mandatory reporting procedures, failed to inform parents and police of the escalating incidents.

Watch below a video about the indoctrination of high school students in Newton:

Concern about a course in Islam, which parents charged amounted to religious indoctrination, reached all the way to the Tennessee state legislature where a bill was passed allowing local school boards to decide how they want to teach about religion.

Parents were concerned about a course teaching about the Five Pillars of Islam that they charge was giving false information to children. As a result, in many locations in Tennessee, the curriculum was streamlined and in some cases, the course was been cut out entirely.

In 2015, parents and students protested after a teacher asked students to copy the shahada, the Islamic declaration of faith, as an example of Arabic calligraphy.

The shahada states: “There is no God but Allah, and Mohammed is his messenger.”

As a result, the school district announced that “a different, non-religious sample of Arabic calligraphy will be used in the future.”

A lesson plan developed in New York State and promoted by the New York State Education Department called “Dying to be a Martyr,” featured video interviews with Islamic terrorists who explain why their attacks on Israelis were justified. The lessons plan contains no instructions for teachers to denounce the views. In addition, the plan does not contain an Israeli response.

The plan was offered to teachers for a decade through the taxpayer-funded Public Broadcasting Service’s “LearningMedia” website.

After a request was made for a comment by state officials, NYSED’s website was changed and the lesson plan was dropped. However, the plan continued to be  listed on another NYSED website as well the promotion of a video titled “Story of Islam: A History of the World’s Most Misunderstood Faith.”