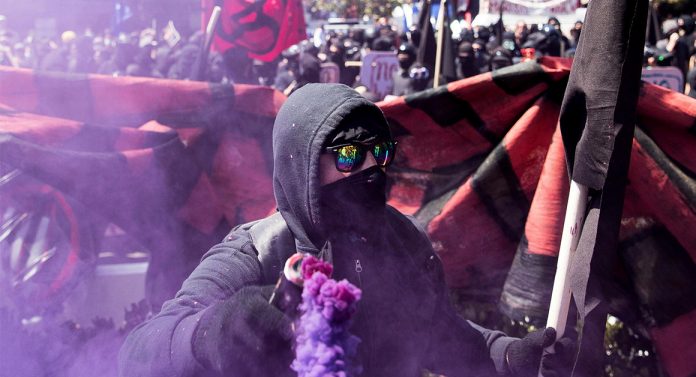 Protesters in black, associated with Antifa, shown at a “No-To-Marxism” rally Aug. 27 in Berkeley, California. The rally had been canceled, but still attracted attendees and demonstrators to Martin Luther King, Jr. Civic Park along with score of police in riot gear. | M. Scott Mahaskey/POLITICO

Federal authorities have been warning state and local officials since early 2016 that leftist extremists known as “antifa” had become increasingly confrontational and dangerous, so much so that the Department of Homeland Security formally classified their activities as “domestic terrorist violence,” according to interviews and confidential law enforcement documents obtained by POLITICO.

Since well before the Aug. 12 rally in Charlottesville, Virginia, turned deadly, DHS has been issuing warnings about the growing likelihood of lethal violence between the left-wing anarchists and right-wing white supremacist and nationalist groups.

Previously unreported documents disclose that by April 2016, authorities believed that “anarchist extremists” were the primary instigators of violence at public rallies against a range of targets. They were blamed by authorities for attacks on the police, government and political institutions, along with symbols of “the capitalist system,” racism, social injustice and fascism, according to a confidential 2016 joint intelligence assessment by DHS and the FBI.

After President Donald Trump’s election in November, the antifa activists locked onto another target — his supporters, especially those from white supremacist and nationalist groups suddenly turning out in droves to hail his victory, support crackdowns on immigrants and Muslims and to protest efforts to remove symbols of the Confederacy.

Those reports appear to bolster Trump’s insistence that extremists on the left bore some blame for the clashes in Charlottesville and represent a “problem” nationally. But they also reflect the extent that his own political movement has spurred the violent backlash.

In interviews, law enforcement authorities made clear that Trump’s inflammatory rhetoric and policies — first as a candidate and then as president — helped to create a situation that has escalated so quickly and extensively that they do not have a handle on it.

“It was in that period [as the Trump campaign emerged] that we really became aware of them,” said one senior law enforcement official tracking domestic extremists in a state that has become a front line in clashes between the groups. “These antifa guys were showing up with weapons, shields and bike helmets and just beating the shit out of people. … They’re using Molotov cocktails, they’re starting fires, they’re throwing bombs and smashing windows.”

Almost immediately, the right-wing targets of the antifa attacks began fighting back, bringing more and larger weapons and launching unprovoked attacks of their own, the documents and interviews show. And the extremists on both sides have been using the confrontations, especially since Charlottesville, to recruit unprecedented numbers of new members, raise money and threaten more confrontations, they say.

“Everybody is wondering, ‘What are we gonna do? How are we gonna deal with this?’” said the senior state law enforcement official. “Every time they have one of these protests where both sides are bringing guns, there are sphincters tightening in my world. Emotions get high, and fingers get twitchy on the trigger.”

Even before Charlottesville, dozens and, in some cases, hundreds of people on both sides showed up at events in Texas, California, Oregon and elsewhere, carrying weapons and looking for a fight. In the Texas capital of Austin, armed antifa protesters attacked Trump supporters and white groups at several recent rallies, and then swarmed police in a successful effort to stop them from making arrests.

California has become another battleground, with violent confrontations in Berkeley, Sacramento and Orange County leading to numerous injuries. And antifa counter-protesters initiated attacks in two previous clashes in Charlottesville, according to the law enforcement reports and interviews.

Tensions have gotten so heated that after activists traded accusations after Charlottesville, a rumor circulated online that antifa would try and shut down the massive Sturgis, South Dakota, motorcycle rally because there were too many Confederate flags and Trump signs. It wasn’t true, but it prompted an outpouring of pleas by attendees for anti-fascists to come so they could assault them. One displayed a “Sturgis Survival Kit” for potential antifa protesters, complete with a tourniquet, morphine, body cast and defibrillator.

“Both the racists and a segment of violent antifa counter-protestors are amped for battle in an escalating arms race, where police departments are outmaneuvered, resulting in increasingly violent dangerous confrontations,” said former New York City police officer Brian Levin, who has been monitoring domestic militants for 31 years, now at the Center for the Study of Hate and Extremism at California State University, San Bernardino. “It’s an orchestrated dance. The rallies spill over into social media and then even more people show up at the next rally primed for violent confrontation.”

In recent decades, authorities have focused almost exclusively on right-wing groups as the most likely instigators of domestic terrorist violence, especially since Timothy McVeigh blew up the Oklahoma City federal building in 1995, killing 168 people.

More recently, the antifa groups, which some describe as the Anti-Fascist Action Network, have evolved out of the leftist anti-government groups like “Black bloc,” protesters clad in black and wearing masks that caused violence at events like the 1999 Seattle World Trade Organization protests. They claim to have no leader and no hierarchy, but authorities following them believe they are organized via decentralized networks of cells that coordinate with each other. Often, they spend weeks planning for violence at upcoming events, according to the April 2016 DHS and FBI report entitled “Baseline Comparison of US and Foreign Anarchist Extremist Movements.”

Dozens of armed anti-fascist groups have emerged, including Redneck Revolt and the Red Guards, according to the reports and interviews. One report from New Jersey authorities said self-described antifa groups have been established in cities including New York, Philadelphia, Chicago and San Francisco.

Some of the DHS and FBI intelligence reports began flagging the antifa protesters before the election. In one from last September, portions of which were read to POLITICO, DHS studied “recent violent clashes … at lawfully organized white supremacist” events including a June 2016 rally at the California Capitol in Sacramento organized by the Traditionalist Workers Party and its affiliate, the Golden State Skinheads.

According to police, counter-protesters linked to antifa and affiliated groups like By Any Means Necessary attacked, causing a riot after which at least 10 people were hospitalized, some with stab wounds.

The intelligence assessments focus less on guns than handmade weapons used by antifa, with photos of members brandishing ax handles and shields, often with industrial-sized bolts attached to create crude bayonets. A senior state law enforcement official said, “A whole bunch of them” have been deemed dangerous enough to be placed on U.S. terrorism watch lists.

The FBI and DHS had no comment on that, or on any aspect of the assessments, saying they were not intended to be made public.

By the spring of 2016, the anarchist groups had become so aggressive, including making armed attacks on individuals and small groups of perceived enemies, that federal officials launched a global investigation with the help of the U.S. intelligence community, according to the DHS and FBI assessment.

The purpose of the investigation, according to the April 2016 assessment: To determine whether the U.S.-based anarchists might start committing terrorist bombings like their counterparts in “foreign anarchist extremist movements” in Greece, Italy and Mexico, possibly at the Republican and Democratic conventions that summer.

In their April 2016 assessment, the DHS and FBI said the anarchist groups would likely become more lethal if “fascist, nationalist, racist or anti-immigrant parties obtain greater prominence or local political power in the United States, leading to anti-racist violent backlash from anarchist extremists.”

The assessment also said the anarchist groups could become more aggressive if they seek to “retaliate violently to a violent act by a white supremacist extremist or group,” they acquire more powerful weapons or they obtain the financial means to travel abroad and learn more violent tactics.

Several state law enforcement officials said that all of those accelerating factors have come to pass. And recent FBI and DHS reports confirm they are actively monitoring “conduct deemed potentially suspicious and indicative of terrorist activity” by antifa groups.

But one of the internal assessments acknowledged several significant “intelligence gaps,” including an inability to penetrate the groups’ “diffuse and decentralized organizational structure,” which made it difficult for law enforcement to identify violent groups and individuals. Authorities also “lack information to identify the travel patterns linking U.S. and foreign anarchist extremists,” the assessment said.

The two agencies also said in their April 2016 assessment that many of the activities the groups engaged in “are not within the purview of FBI and DHS collection” due to civil liberties and privacy protections, including participating in training camps, holding meetings and communicating online.

In another assessment this past August, DHS warned about the potential for unprecedented violence at Charlottesville. The agency also acknowledged gaps in its understanding of antifa, saying it had only “medium confidence” in its assessments regarding both the affiliations among the various groups and the motivation of attackers.

Said one senior New Jersey law enforcement official following the antifa groups: “There’s a lot more we don’t know about these groups than what we do know about them.”