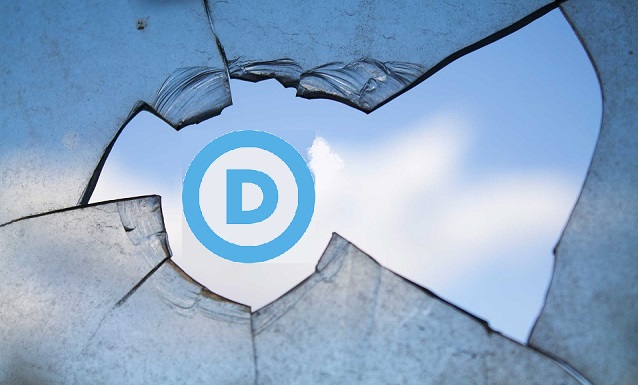 James Q. Wilson and George Kelling in 1982 wrote in The Atlantic an article titled “Broken Windows.” Wilson and Kelling introduced the Broken Windows Theory (BWT) which used broken windows as a metaphor for disorder within neighborhoods. The theory links disorder and incivility within a communityto subsequent occurrences of serious crime.

[A]t the community level, disorder and crime are usually inextricably linked, in a kind of developmental sequence. Social psychologists and police officers tend to agree that if a window in a building is broken and is left unrepaired, all the rest of the windows will soon be broken.This is as true in nice neighborhoods as in rundown ones. Window-breaking does not necessarily occur on a large scale because some areas are inhabited by determined window-breakers whereas others are populated by window-lovers; rather, one unrepaired broken window is a signal that no one cares, and so breaking more windows costs nothing. (It has always been fun.) [Emphasis added] Read more.

The Rise of Political Crime

The key notion put forward by Wilson and Kelling is that “at the community level, disorder and crime are usually inextricably linked, in a kind of developmental sequence.” Once order breaks down you have a growing number of people committing more and more serious crimes.

We are seeing the rise of “political crimes” in our neighborhoods, towns and cities. 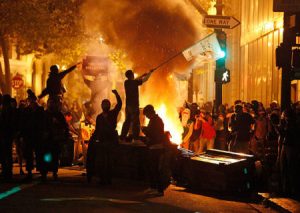 In 2011 Democrats began encouraging people to “break windows” by supporting the Occupy Wall Street movement. Senator Bernie Sanders stated, “The Occupy Wall Street protests are shining a national spotlight on the most powerful, dangerous and secretive economic and political force in America.” Actor Woody Harrelson said, “I’m an anarchist and I do think things such as Occupy Wall Street are about getting a little closer to the solution.”

The Democrat Party, and then President Obama, failed to repair the broken windows beginning with the Occupy Oakland riots in California, which inextricably lead to the 2013 riots in Sanford, Florida, 2014 riots in Ferguson, Missouri and most recently the 2017 riots and death in Charlottesville, Virginia.

In fact, the Democrats are encouraging breaking windows, because “it has always been fun” so long as its the other party that gets hurt. 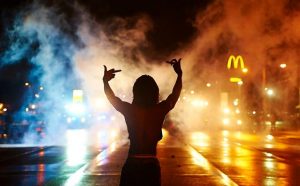 Fast forward to Ferguson, Missouri which experienced protests and riots that began the day after the fatal shooting of Michael Brown by white police officer Darren Wilson on August 9, 2014. Officer Wilson was acquitted of any wrong doing, which lead to more protests and riots.

This incident coupled with the shooting on February 26, 2013, in Sanford, Florida, when George Zimmerman, a 28-year-old mixed race Hispanic man who was a neighborhood watch coordinator, fatally shot Trayvon Martin, a 17-year-old African American high school dropout. Zimmerman, under Florida’s stand your ground law, was acquitted of Martin’s shooting. The Obama Department of Justice reviewed the case for any civil rights violations but this was dropped citing “insufficient evidence.”

You know, when Trayvon Martin was first shot I said that this could have been my son.  Another way of saying that is Trayvon Martin could have been me 35 years ago.  And when you think about why, in the African American community at least, there’s a lot of pain around what happened here, I think it’s important to recognize that the African American community is looking at this issue through a set of experiences and a history that doesn’t go away.

These remarks by former President Obama inextricably led to Ferguson and the empowerment of the Black Lives Matter movement which was created on July 13, 2013.

Charlottesville, Virginia and beyond

Black Lives Matter is a chapter-based national organization working for the validity of Black life. We are working to (re)build the Black liberation movement.

This is Not a Moment, but a Movement.

#BlackLivesMatter was created in 2012 after Trayvon Martin’s murderer, George Zimmerman, was acquitted for his crime, and dead 17-year old Trayvon was posthumously placed on trial for his own murder. Rooted in the experiences of Black people in this country who actively resist our dehumanization, #BlackLivesMatter is a call to action and a response to the virulent anti-Black racism that permeates our society. Black Lives Matter is a unique contribution that goes beyond extrajudicial killings of Black people by police and vigilantes. 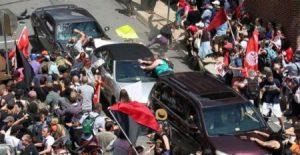 Antifa face off against neo-Nazis as cars plow into the crowds.

August 12, 2017 saw riots, mayhem and a murder committed in Charlottesville, Virginia when two extremist groups faced off one against the other. Disorder and incivility were on full display near the home of Thomas Jefferson, the founder of the Democrat Party.

Since the inauguration of President Donald J. Trump we have witnessed a coalition of Democrats, the anti-Fascist (ANTI-FA) movement, neo-Nazis and Black Lives Matter working to cause discord and incivility. Calls for the death of politicians and their supporters are part and parcel of the daily news.

Even Maria Chappelle-Nadal, a Democrat member of the Missouri State Senate, openly hoped for the assassination of the President of the United States.

Why we must fix, not break, windows!

Is it too late to fix these broken windows? No. Not if the Democrat Party stands firm against anymore breaking of windows. Let’s all pray that they come to their senses and call for windows to be repaired, not broken.

When people see it’s alright to break windows the question is: What will they break next? We know that violence begets more violence. Where will the Democrat Party, and its base, break the next window?

We must be window lovers and resist the window breakers.

Remember …if a window in a building is broken and is left unrepaired, all the rest of the windows will soon be broken.