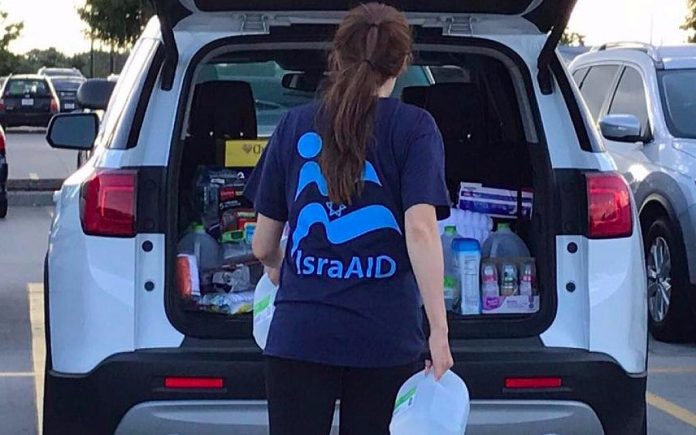 With experience after hurricanes Sandy and Katrina, humanitarian organizations bring supplies and help pick up the pieces from one of the country’s worst natural disasters.

Niv Rabino arrived home to Haifa earlier this week after completing a stint as head of IsraAID‘s mission on the Greek island of Lesvos. For nine months, Rabino oversaw the humanitarian aid organization’s intensive work supporting the medical and psychosocial needs of Middle Eastern and African refugees stuck in camps waiting for permission to migrate to the European mainland. He was looking forward to some time off.

Then Hurricane Harvey struck Texas, and Rabino knew his vacation was going to have to be postponed. IsraAID immediately put together a response team, and he offered to join. It was obvious that the people of Texas needed help, but there was also a personal reason why Rabino wanted to jump on a plane to the US: His brother’s 11-year-old daughter was caught up in the flooding.

“She had gone from Tel Aviv to Houston on vacation with her grandmother to visit relatives. Fortunately, they were able to ride out the storm by holing up with 15 other people on the second floor of the relatives’ house for three days,” Rabino told The Times of Israel.

It was the only house on the block with two floors, so neighbors crowded in, as well. They fortunately had food and water with them to last until the flood water on the first floor receded.

“My niece was brave about it, but I can see that it was a trauma for her from the way she talks about it,” Rabino said.

The relatives — and their house — fared better than many of the others Rabino met upon his arrival to Houston on Wednesday afternoon with four other IsraAID team members. As of Thursday, 38 deaths were attributed to Hurricane Harvey. An estimated 30,000 people were still in shelters, and FEMA reported that 95,745 people in Texas had been approved for emergency assistance, which includes financial help with rent, repairs and lost property. 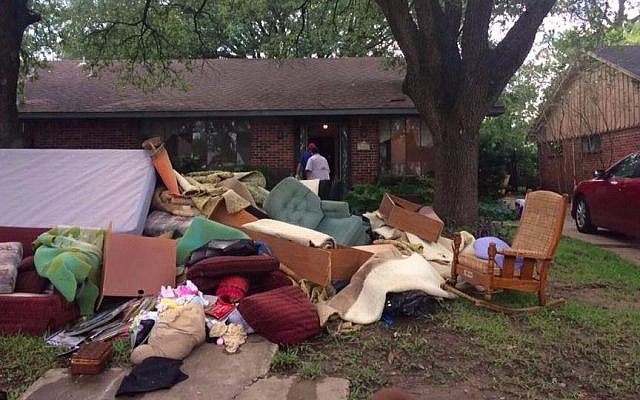 Rabino’s niece and her grandmother were scheduled to fly home to Israel from Austin on Friday, eager to put their harrowing Hurricane Harvey experience behind them. 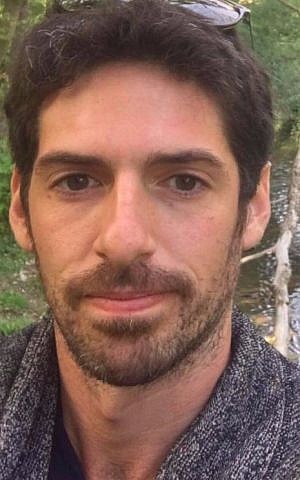 Rabino will remain in Houston for at least three weeks. According to IsraAID’s co-CEO Yotam Polizer, the NGO usually sends an initial team into a disaster area for three weeks to assess the situation and set up operations, and then rotates team members in an out for the next six months.

“Dallas was the closest we could get at that point. Rescue operations were ongoing in Houston and you couldn’t get in there unless you had a boat. We’ll go where the people are, but we have to be able to get there safely,” said IsraAID communications director Mickey Noam-Alon.

In the meantime, mission head Rachel Gerber and team member Erin Zaikis visited shelters and met with representatives of community organizations, including the Jewish Federation of Greater Dallas and Jewish Family Service of Greater Dallas to get specific information on Houston families and neighborhoods that could use IsraAID’s assistance with debris removal. 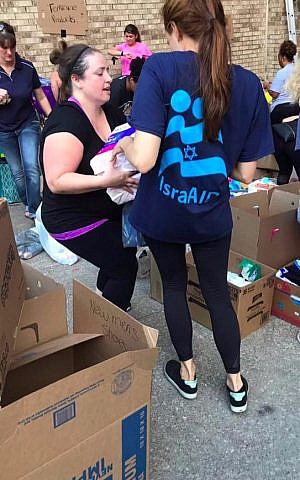 “I was talking to a lot of different people and giving out my number. We got specific requests from Houston people who wanted us to help remove debris,” Gerber said.

While in Dallas waiting for the team members flying in from Israel, Gerber and Zaikis also purchased a load of supplies and dropped them off at a distribution center. The donation included much-need items such as baby bottles, formula, baby food, feminine hygiene products, and underwear.

With IsraAID having responded in the past to Hurricanes Katrina and Sandy, as well as recent flooding events in Texas, the team also knew what kind of equipment they would need to stock up on for removing debris, and mucking out and gutting storm-damaged houses.

Immediately after Rabino and his two colleagues from Israel landed Wednesday morning, all five IsraAID team members drove to Houston, arriving by mid-afternoon.

“The drive took about four hours, and it was pretty smooth. We had to take a roundabout route because Interstate 45 had closures. We saw flooding alongside the highway, but the water has already receded in the Northwest part of Houston as we entered the city,” Rabino said.

After checking on his niece and her grandmother, Rabino went to work removing debris from damaged homes in Bellaire, a southwest suburb of Houston.

The IsraAID team encountered traumatized people removing the water-logged contents of their homes out onto the now-dry streets. 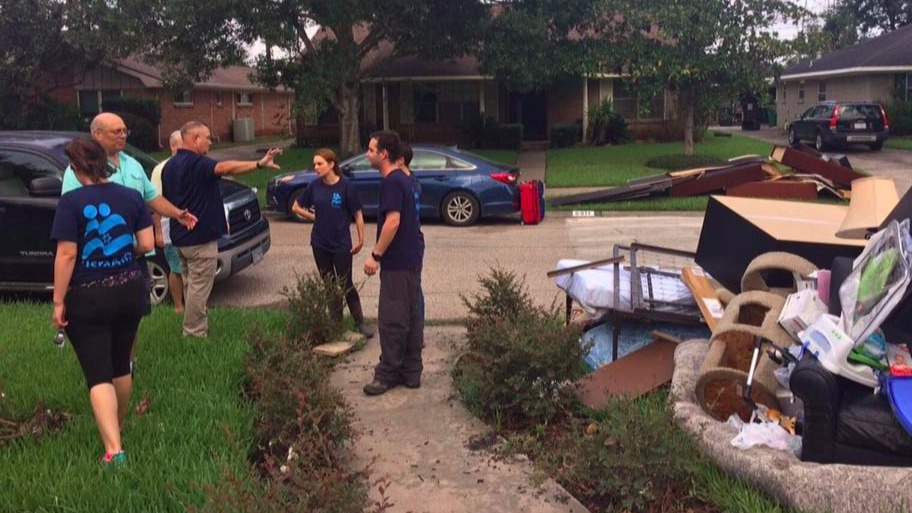 “There was no more water, but the houses were filled with debris. There were piles of garbage everywhere. Some people were doing the removal themselves, and others had hired companies that bring tractors to do it,” Rabino said.

Rabino reported that Texans have welcomed the IsraAID team, and that people have been surprised to learn that the Israelis came so far, so quickly to help them.

“They are also happy to hear about IsraAID’s history and that we have experience with this kind of recovery work and know what we are doing,” Rabino said.

The storm victims have exhibited a roller coaster of emotions while interacting with the Israeli team.

‘This was much worse than anything in the past. It came as a big surprise’

“This is devastating for people. They’ve lost everything. This was much worse than anything in the past. It came as a big surprise,” said Gerber.

“The people we are helping are dealing with a huge loss and are very emotional, but at the same time they have to keep their composure and direct us as we work in their homes,” Rabino said.

Rabino managed to recover one family’s jewelry. It was in a plastic bag submerged in a bucket of water, and was almost thrown out.

“I showed them the jewelry and assured them it was salvageable if it was cleaned in chlorine. They were grateful, but they were also kind of numb,” he said. 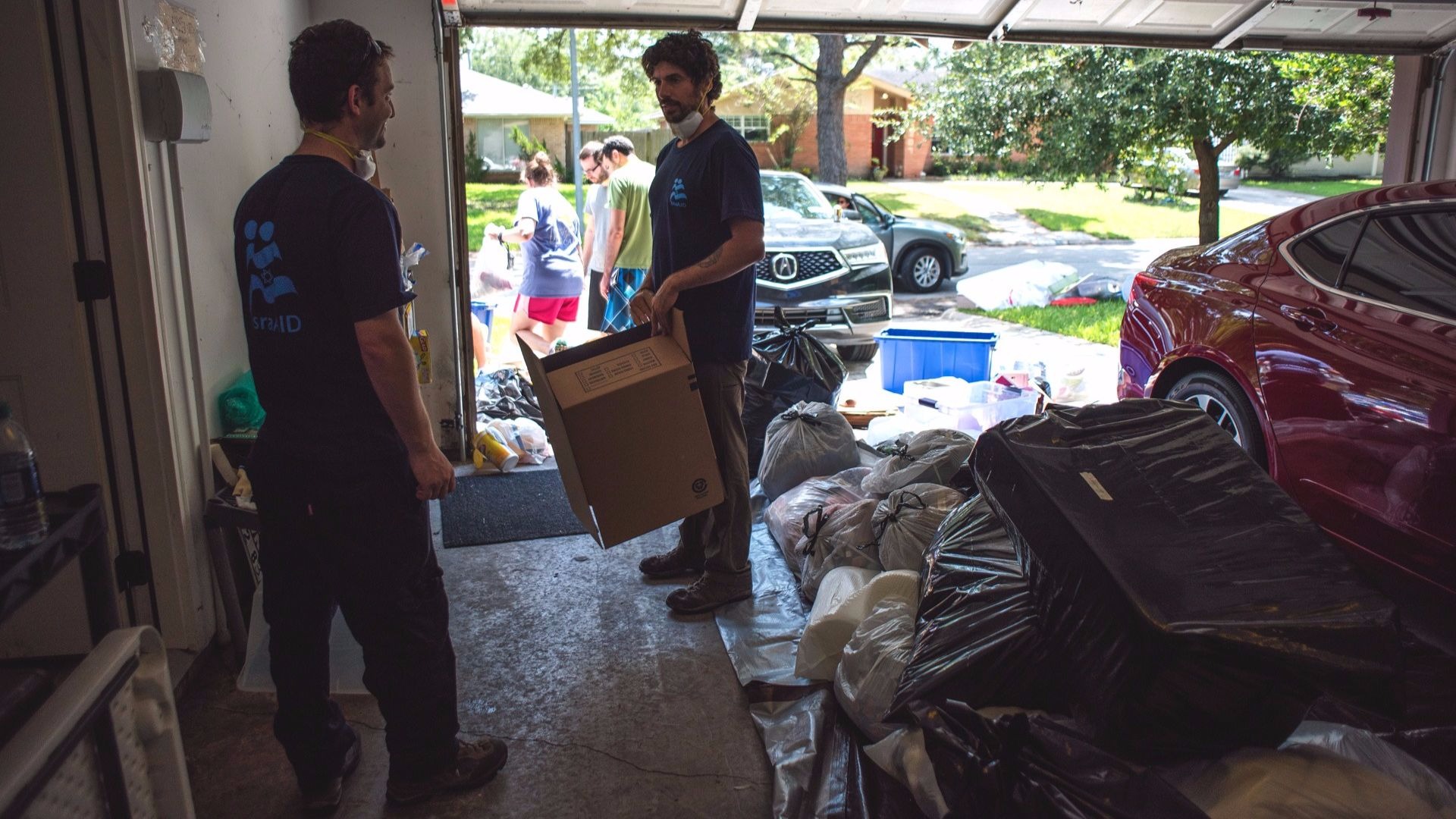 While some members of the IsraAID team continue with this work, others will begin leading stress relief and recreational activities at Houston shelters, community centers and schools as early as Friday. With two more IsraAID workers arriving in Houston by the weekend, the team will be able to work with relatively large groups of adult and child flood victims, using art, movement therapy and mindfulness techniques.

iAID, another Israeli humanitarian organization, is expected to send a team of approximately eight volunteers to Texas by next week. Founded by former IsraAID founding director Shachar Zahavi, iAID connects innovation and technology to the international humanitarian aid scene.

“We’ve been in touch with the Texas Army National Guard and the local Jewish community, and we’ll coordinate with them,” Zahavi told The Times of Israel.

Zahavi said his organization aims to support the US relief efforts with “Start-up Nation” solutions, such as clean energy and clean water technologies, that can empower communities to repair themselves and better prepare for the next natural disaster.

“We’ll do an assessment, but it will all depend on what the Americans’  needs are and what they ask for,” Zahavi said. 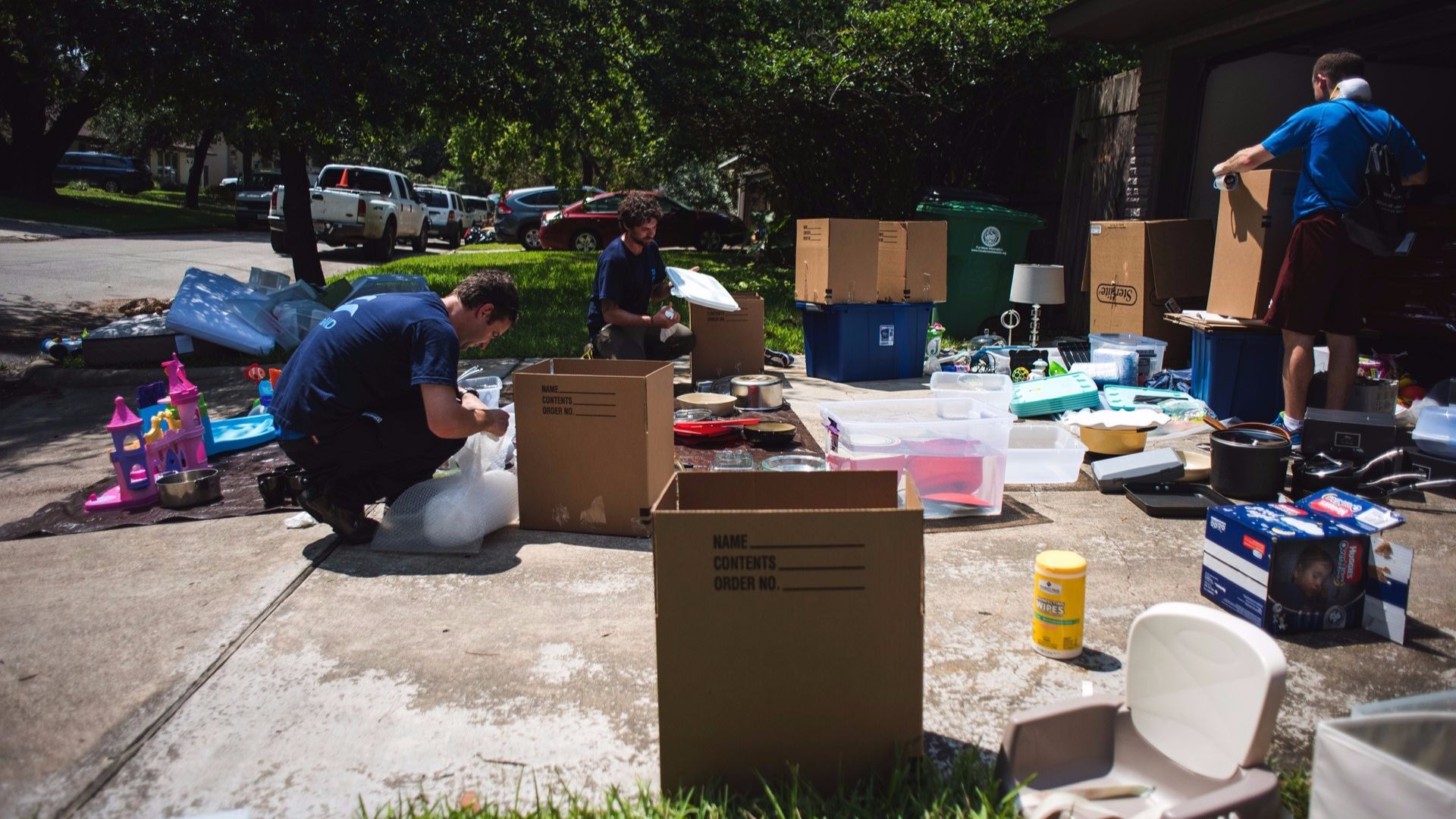 It’s been a whirlwind week for Rabino, who ended up spending only one day in Israel, and flying between three continents.

Switching directly from working with Syrian, Afghan and other refugees in Greece to assisting flood victims in Texas has made Rabino think a lot about having a home — and about losing it.

“For the last 10 years, I’ve been moving around all the time because of the work I do. I am transient and homeless by choice. The people we aid aren’t,” he said.