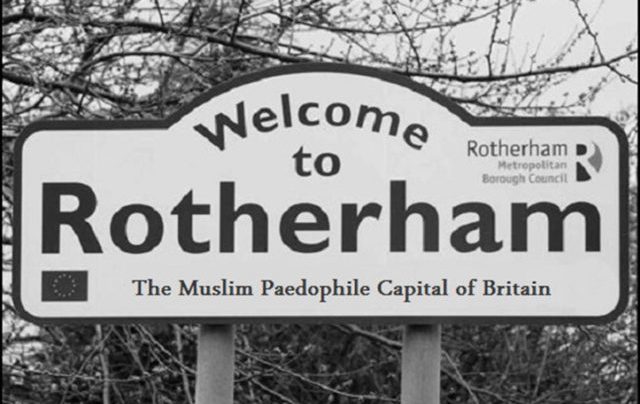 The BNP is or at least was an avowedly race-based party, and “alt-right,” when it has any substance at all and isn’t just an establishment media smear term, generally refers to racist and anti-Semitic views. These are not views I support; I’ve always maintained that opposition to jihad terror and Sharia oppression is not a racial issue, despite establishment media and Islamic supremacist claims that such opposition is “racist.”

But all that is really beside the point here. It is a manifest fact that the rape gangs were Muslim, and that British authorities feared to do anything about them for fear of being seen as “racist.” 1,400 British non-Muslim children were gang-raped and brutalized by Muslims in Rotherham, and “several staff described their nervousness about identifying the ethnic origins of perpetrators for fear of being thought as racist; others remembered clear direction from their managers not to do so.”

The Muslims in Worcester, if they actually oppose the Muslim rape gangs, should acknowledge the fact that these gangs were operating on Islamic principles, and work to reform them, instead of denouncing these posters as “Islamophobic.” The Qur’an teaches that Infidel women can be lawfully taken for sexual use (cf. its allowance for a man to take “captives of the right hand,” 4:3, 4:24, 23:1-6, 33:50, 70:30). The Qur’an says: “O Prophet, tell your wives and your daughters and the women of the believers to bring down over themselves of their outer garments. That is more suitable that they will be known and not be abused. And ever is Allah Forgiving and Merciful.” (33:59) The implication there is that if women do not cover themselves adequately with their outer garments, they may be abused, and that such abuse would be justified.

But for the Worcester Muslim Welfare Association to acknowledge that would mean rejecting Qur’anic dictates, and it is never going to do that.

A FAR-right group has claimed responsibility for putting up “hate crime” posters in the city, linking Muslims with child grooming gangs.

Police are treating the posters as a hate crime and the Worcester Muslim Welfare Association has condemned the posters.

They say the ‘mischievous’ posters are aimed at dividing a peaceful community in Worcester.

The association says the posters have been plastered across the city centre over the last two weeks.

The right-wing British Renaissance Policy Institute (BRPI) said its members were responsible for the poster campaign.

Jack Sen, the founder of the BRPI, said: “I am pleased my men have taken the initiative to do something on their own.

“We had a meeting in Worcester two-and-a-half months ago and encouraged them to protest peacefully and legally.

“We gave them different ideas. We don’t want them to go into the streets…and behave like a terrorist organisation and cause trouble.

“We have to do it in an aggressive but legal manner. Those [posters] I’m assuming are the leftovers from the British National Party (BNP). [Nick] Griffin had nothing to do with it, he’s not involved in any way.”

Mr Sen, aged 40, who affiliates himself with the American ‘alt-right’, grew up in Malvern and previously stood as a UKIP parliamentary candidate in West Lancashire before he was suspended and joined the BNP.

He also lived in America for 16 years and said he was recently involved in the Charlottesville protests….

Mohammed Iqbal, general secretary of the Worcester Muslim Welfare Association, condemned the posters, which have appeared ahead of the Eid al-Adha celebrations.

He said: “The aim of these posters and using symbols associated with our religion is pure mischievousness and nothing more than to create division between our peace loving community of Worcester.