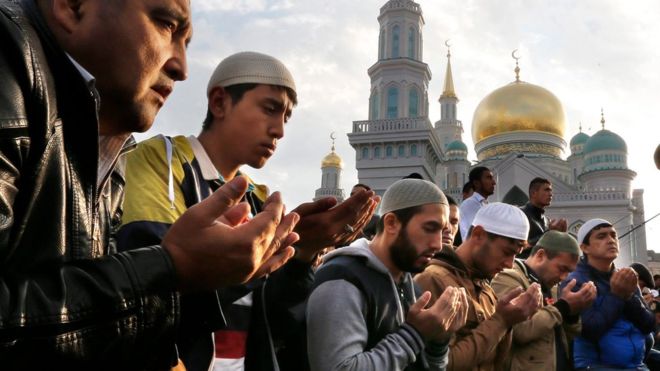 Editors Note:  Article from 2015, but a realization as to what it could be in America and nearly is in some cities, Dearborn, Hamtramck for examples.  Also, the goal in the Islamic Hijrah is exactly this, move to foreign countries, gain strength in numbers, and take over.

Muslims in Russia came out to celebrate Eid al-Fitr on Friday, with Moscow proving no exception. Tens of thousands gathered outside Moscow’s Grand Mosque to celebrate the holiday, marking the end of Ramadan, with a drone capturing the celebrations from high in the sky.

The footage from the drone’s camera shows line after line of worshippers praying before the mosque. The drone launches from street level and circles the Grand Mosque, located in the north of the city, which is entering the final stages of its construction.

Islam is the second-most widely followed religion in Russia, with an estimated 14 percent of Russians listing themselves to be of Muslim faith. Eid al-Fitr, the Feast of the Breaking of the Fast, is celebrated by Muslims around the world to mark the end of Ramadan, the Islamic holy month of fasting.

President Vladimir Putin congratulated Russia’s Muslims on the occasion of the holiday on Friday, with a press statement released on the Kremlin’s website noting that Eid al-Fitr “is infused with deep spiritual significance and the joy of strengthening one’s faith and acquiring invaluable new experience of moral cleansing.” The president emphasized the positive role Muslim organizations have played in Russian life, noting that “they are steadily developing their cooperation with state and public organizations and pay much attention to charity and educational initiatives.” Putin also praised Russia’s clergy, who have “resolutely opposed attempts by extremists of various types to pervert Islam’s values and to sow the seeds of hatred and intolerance.”