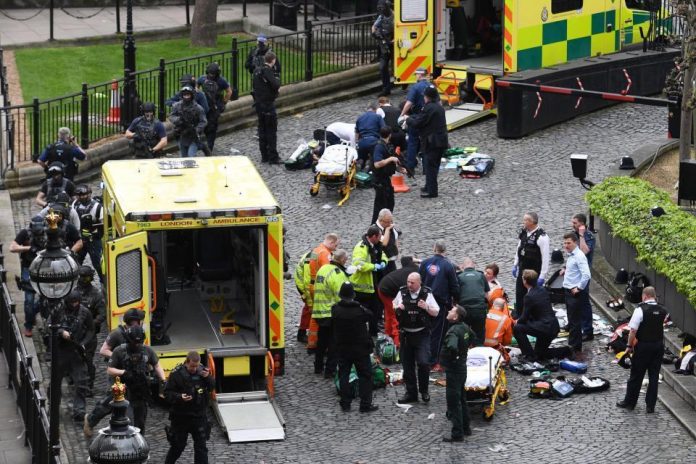 On July 14, 2016, Tunisian-born Mohamed Lahouaiej-Bouhlel drove a 19-ton truck into a crowd celebrating Bastille Day at Nice’s Promenade des Anglais, killing 86 people and wounding more than 430 others. ISIS claimed responsibility for the terrorist attack two days later, calling Lahouaiej-Bouhlel a “soldier of the Islamic State.” The attack in Nice, though not the first of its kind, was the deadliest modern vehicular terrorist attack* in Europe, launching a wave of terrorist and ISIS-claimed vehicular attacks around the world. Since the Nice attacks, CEP has documented major vehicular incidents in Vienna,* Ohio,*Berlin,* London,* Antwerp,* Stockholm,* Paris,* and Barcelona.*

In the fall of 2016, a wave of vehicular terrorist attacks collectively left 12 people dead and 67 others wounded. In September 2016, an assailant drove his car at shoppers in Vienna’s Favoriten district while shouting “Allahu Akbar,” leaving no injuries.* In November 2016, Somali-born Abdul Razak Ali Artan carried out a car and knife attack at Ohio State University, wounding 11 people.* In December 2016, Tunisian-born Anis Amri charged at pedestrians attending the Christmas Market in Berlin, killing 12 people and wounding 56 others in an attack claimed by ISIS. Footage released by the ISIS-affiliated Amaq news agency showed Amri pledging allegiance to the group’s leader, Abu Bakr al-Baghdadi, vowing “we will slaughter” the “crusaders who are shelling the Muslims every day.”*

CEP has documented 32 vehicular terrorist attacks since 2006, collectively resulting in the deaths of at least 183 people and the injury of at least 959 others.

Vehicular attacks continued into 2017, leaving at least 29 people dead and more than 170 wounded. On March 22, 2017, terrorist assailant Khalid Masoodkilled five people and wounded 50 more during a vehicle and stabbing attack in London.* The following day, a similar attack was thwarted in Antwerp, Belgium.* On April 7, another assailant carried out a suspected terrorist attack, this time in Sweden, hijacking a truck and careening into crowds of pedestrians at the Ahlens Mall in Stockholm, killing four people and wounding 15 more.*

On the evening of June 3, 2017, three assailants drove a van at high speed into crowds on the London Bridge and exited the vehicle to stab other pedestrians at the nearby Borough Market.* The attack, claimed by ISIS, left at least seven people dead and 48 others wounded, and followed a call by ISIS on May 17 to carry out terrorist attacks in the United States, United Kingdom and European Union using knives and trucks.* On June 19, 2017, an assailant drove at a crowd of worshipers near a mosque in north London, leaving at least eight people wounded.* Later that day, an armed assailant rammed his vehicle at a police car on the Champs-Elysees street in Paris, seriously injuring himself but leaving no other casualties.* On August 17, 2017, a van was deliberately driven into a crowd of tourists in Las Ramblas, a tree-lined street in the center of Barcelona. The attack, claimed by ISIS, left at least 13 people dead and 50 others wounded.*

Despite the recent uptick in ISIS-claimed attacks, vehicular attacks are not a new phenomenon. Terrorists have carried out car-ramming attacks for more than a decade, in locations ranging from North Carolina* to Jerusalem,* Tel Aviv,* Quebec,* Dijon,*Nantes,* the West Bank,* Graz,* and Xinjiang,* The recent uptick in vehicular attacks, however, appears to have been in large part inspired by ISIS’s explicit calls to employ cars as weapons. In May 2017, the U.S. Transportation and Security Agency (TSA) issued a warning to truck and bus companies urging companies to watch out for potential vehicular terrorist assailants and listing more than a dozen car-ramming attacks since 2014 that have collectively killed more than 170 people.* As the TSA wrote in its memo, terrorists groups will likely continue to encourage “unsophisticated tactics such as vehicle-ramming” since these types of attacks are difficult to prevent and “could inflict mass casualties if successful.”*

Al-Qaeda, ISIS, and Hamas Call for (and Claim) Attacks

Terrorist groups like al-Qaeda, ISIS, and Hamas have long called for—and claimed responsibility for—vehicular terrorist attacks. Al-Qaeda’s second issue of Inspire magazine, released in October 2010, contained an article calling for vehicular attacks and referring to a pickup truck as a potential “mowing machine” that can be used to “mow down the enemies of Allah.”* Inspire editor-in-chief Yahya Ibrahim urged al-Qaeda followers to “[g]o for the most crowded location” and “pick up as much speed as you can” in order “strike as many people as possible.”* An FBI memo released in December of that year noted the emerging danger from vehicular attacks, which may allow terrorists with “limited access to explosives or weapons” the ability to conduct an attack with “minimal prior training or experience.”*

Other groups have since encouraged the use of motor vehicles as weapons of terror. In September 2014, ISIS spokesman Abu Muhammad al-Adnani issued a call to kill non-believers using any means at their disposal. “[S]ingle out the disbelieving American, Frenchman, or any of his allies,” he said. “Smash his head with a rock, or slaughter him with a knife, or run him over with your car.”* In November of that year, French foreign fighter Abu Salman al-Faranci appeared in a video reiterating ISIS’s call for followers—particularly in France—to carry out domestic attacks if they could not join ISIS abroad. As Faranci said to his viewers: “Terrorize them and do not allow them to sleep due to fear and horror. There are weapons and cars available and targets ready to be hit.”*

Following the wave of vehicular terrorist attacks in 2016 and 2017, ISIS has continued to issue calls to violence and warnings of additional car-ramming attacks. On May 17, 2017, the group released a video threatening attacks in the United Kingdom, Europe, and the United States, especially in New York, Las Vegas, and Washington, D.C. ISIS has also threatened and encouraged vehicular attacks on gay pride parades.* In June 2017, an account operating under the name of ISIS’s Nashir agency released a renewed call for ISIS supporters to “[r]un over people by vehicles and [c]ut off their necks in any time [sic].”*

ISIS and al-Qaeda are not the only terrorist groups to urge or claim credit for vehicular terrorist attacks. One of the first documented vehicular attacks was carried out by an unaffiliated Iranian-American, who wounded nine people at the University of North Carolina in 2006.* As the assailant Mohammed Reza Taheri-azar told investigators, he had had carried out the attack in an effort to punish the U.S. government and “avenge the deaths or murders of Muslims around the world.”*

A slew of car-ramming attacks have also been carried out by Palestinian assailants in Israel and the West Bank. In November of 2014, Hamas and other Palestinian terrorist groups—including the Palestinian Islamic Jihad (PIJ)—praised a wave of vehicular attacks and called for more. One such image posted online read, “Run [them] over, son of Hebron…and son of Jerusalem. Take your car…and run over the Zionists.”*

Terrorists have carried out attacks using cars and trucks in a wide range of countries, including the United States, United Kingdom, France, Canada, China, Germany, Israel, and Belgium. In some cases, assailants have used gas canisters or other explosives to supplement the potential damage from car-ramming attacks. This type of planning could be seen in the June 2007 Islamist attack targeting Glasgow Airport in Scotland,* the May 2014 attack in China’s Xinjiang province,* and the June 2015 attack on a gas plant in southern France.*

In other cases, extremists have managed to launch deadly or harmful vehicular attacks using low-sophistication tactics like car-ramming and stabbing. CEP has documented more than two dozen vehicular terrorist attacks since 2000. Of these, the single deadliest attack was the July 2016 Bastille Day attack in Nice, when terrorist assailant Mohamed Lahouaiej-Bouhlel killed 86 people and wounded 434 more at Nice’s Promenade Des Anglais.*

As the TSA notes, vehicular terrorist attacks are becoming “more commonplace around the globe.”* Indeed, terrorists are increasingly relying on low-sophistication tactics like car-ramming and stabbing to kill or injure large groups of people without easy detection or intervention by law enforcement. These assailants often target locations where large numbers of people congregate, particularly on or around major national holidays, when civilians are likely to be outdoors shopping or celebrating.*

Although there is little that can be done to prevent the weaponization of motor vehicles, the TSA has encouraged bus and trucking companies to be vigilant about indicators—like modifications to vehicles—that may suggest a vehicular terrorist attack. The TSA has also encouraged the use of vehicle barriers to prevent vehicles from accelerating into populated areas, protecting large crowds of people from attacks at outdoor venues like concerts, sporting events, and holiday markets.*

As CEP notes, far more can also be done by tech companies to counteract calls to violence by groups like ISIS, al-Qaeda, and Hamas. After the March 2017 Westminster attack, YouTube was “inundated with violent ISIS recruitment videos,” according to findings by the U.K. government. The British government noted that YouTube failed to block this slew of content, despite the videos being easily searchable and posted under usernames like “Islamic Caliphate.”* After the June 2017 London Bridge attack, U.K. Prime Minister Theresa May called for increased regulation on the Internet, where terrorist recruitment and incitement to violence largely takes place remotely.* Despite Google’s claims to have improved its takedown efforts, CEP has tracked the appearance and reappearance of major ISIS videos on YouTube (Google’s subsidiary), including those calling for vehicular terrorist attacks. CEP’s findings raise serious questions about Google’s stated commitment to confronting terrorist recruitment using hashing technology, which prevents flagged content from being re-uploaded to a platform.

CEP has tracked the appearance and reappearance of major ISIS videos on YouTube calling for vehicular terrorist attacks. CEP’s findings raise serious questions about the company’s stated commitment to confronting terrorist recruitment on its platform.

In many cases, assailants themselves are active on tech platforms like Google, Facebook, and WhatsApp prior to carrying out the attack. Abdul Razak Ali Artan, perpetrator of the November 2016 Ohio State University attack, called al-Qaeda cleric Anwar al-Awlaki “our hero” in a message posted to Facebook.* Khalid Masood, perpetrator of the March 2017 Westminster attack, sent a message on WhatsApp announcing his intention to wage jihad minutes before launching his assault.*

While it is impossible to prevent all vehicular terrorist attacks, far more can and should be done to reduce the threat. Tech companies, for one, can do far more to prevent groups like ISIS, al-Qaeda, and Hamas from using their platforms to recruit new members and reach their target audiences. These companies can also be more proactive and cooperative with law enforcement about the activity of lone-wolf terrorists on their platforms. Although we cannot prevent each and every vehicular attack, efforts to prevent even a few attacks can have the foreseeably large impact of reducing widespread fear and, most importantly, saving lives.