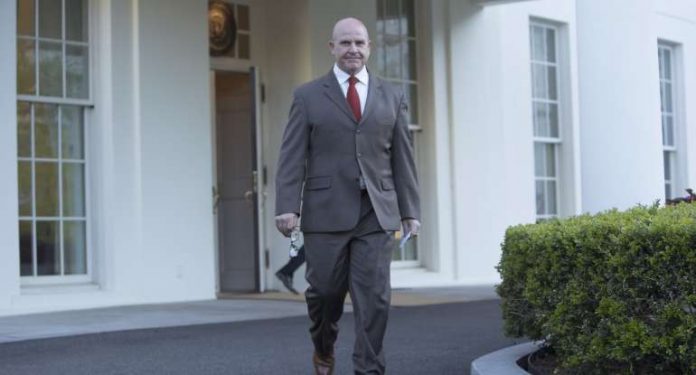 During the week of August 27, an Israeli delegation met with members of the National Security Council (NSC) at the White House to discuss the current threat to Israel by the terror group Hezbollah.

Israel believes this threat is currently dire. This meeting preceded a two-week long Israeli Defense Forces (IDF) exercise to rehearse for possible war with Hezbollah. The Jerusalem Post described this exercise, which commenced on September 4 and is ongoing, as the IDF’s largest in 20 years.

Hezbollah has been a U.S.-designated Foreign Terrorist Organization since 1997. However, National Security Adviser H.R. McMaster reportedly brought NSC Senior Director on Counter-Terrorism Mustafa Javed Ali to the White House meeting with Israel. Ali, a McMaster appointee, is described by a senior administration source as being “opposed to Hezbollah’s designation as a terrorist organization.”

What then transpired at the meeting has been confirmed to PJ Media by several administration sources, by members of non-governmental organizations involved in national security, and by a source within the Israeli government.

This demand was made despite the clear likelihood that Ali would later be privy to the meeting’s materials and discussion. As such, sources speculated that Israel intended the demand to serve as a message to President Trump that McMaster’s behavior has constituted a subversion of Trump’s stated Middle East policy.

Mustafa Javed Ali, second from right, attending West Point’s 2015 Senior Conference. The conference was described as having focused on “unconventional approaches to counterterrorism.”

None of the several sources were aware if Trump had been made aware of the incident.

As has been widely reported, Trump’s Chief of Staff General Kelly has instituted tight restrictions on information and contacts reaching the president. Additionally, Kelly has been said to be working closely with General McMaster on issues related to the flow of information within the administration.

Friction between General McMaster and the Israeli delegation did not end with Israel’s demand that Ali leave the room.

Sources reported that McMaster went on to explicitly dismiss the Israelis’ specific concerns about Hezbollah.

In particular, the Israelis expressed concern that the “safe zone” currently being established within Syria — an idea that had been vociferously supported by Hezbollah’s sponsor, Iran — would immediately become a safe zone for Hezbollah to operate.

McMaster was said to “blow off” this major Israeli concern, and to be “yelling at the Israelis” during the meeting.

For months, General McMaster has been under fire regarding his personnel decisions from Trump voters and the large majority of Americans who support Israel. McMaster has fired or otherwise removed all NSC appointees who strongly supported President Trump’s Middle East campaign platform.

Trump had repeatedly promised that his administration would reject the Bush/Obama policy of denying the doctrinal Islamic roots of terror, most notably expressed by Trump’s willingness to declare jihadist attacks to be “radical Islamic terrorism.” Indeed, Trump honored this pledge early in his term via the many appointees to the NSC brought on by former National Security Adviser Michael Flynn and others.

Under McMaster, however, all of these voices have been removed from the NSC in what has been described as a “purge.”

In their stead, McMaster has astonishingly welcomed figures such as Kris Baumanand Robert Malley to his NSC. Bauman’s and Malley’s careers have been so objectively subversive to the Trump agenda on Israel that McMaster might as well have appointed Barack Obama and Jimmy Carter.

Mustafa Javed Ali in attendance at former President Obama’s 2010 White House Iftar Dinner. Ali worked within the FBI at the time. Per a source: “No Muslim reformers or liberals were welcome at those events.” (List of expected attendees available at link.)

Little information has previously been public about McMaster appointee Mustafa Javed Ali. Regarding Israel’s demand that he leave the meeting, a source claimed:

Israel possibly knows more about Javed Ali than [the Trump administration] does.

Earlier this year, Ali was rumored to have caused the cancellation of a scheduled talk to the NSC by Ayaan Hirsi Ali on account of her “Islamophobia.” Mrs. Ali, who escaped to the Netherlands from Kenya after fleeing a forced marriage, violence, and being a victim of female genital mutilation, is now an activist exposing Islamic doctrine. She has lived under 24/7 protection since 2004, when a Muslim murdered Dutch film director Theo van Gogh for making a film with Mrs. Ali that criticized Islam. A five-page note threatening the same fate for Ali was left pinned to van Gogh’s chest with a knife.

Sources within the Trump administration have confirmed to PJMedia that this rumor about Mustafa Javed Ali was correct: Mrs. Ali had been invited to speak to the NSC. She was later disinvited due to Javed Ali’s interference.

On August 11, Mrs. Ali published a Wall Street Journal op-ed criticizing Trump for “losing focus” on his terrorism campaign pledges. Within the op-ed, she chose to mention only the “most charitable” criticism being floated about General McMaster:

Some administration critics have blamed the loss of focus on Lt. Gen. H.R. McMaster, who became White House national security adviser in February. The most charitable formulation of this criticism is that military men who slogged their way through wars in Iraq and Afghanistan have an aversion to the argument that we face an ideological opponent, as opposed to a series of military problems.

But I put the responsibility on Mr. Trump. With regard to radical Islam, he simply seems to have lost interest.

Yet senior administration sources are far less charitable about McMaster and his appointee Mustafa Javed Ali. As mentioned above, they described Ali as taking the breathtaking position that Hezbollah should not be a U.S.-designated foreign terrorist organization. They described Ali as holding the same view regarding the Muslim Brotherhood.

They claimed Ali’s work within the NSC essentially amounts to him attempting to prevent the Trump administration from using any of the means at its disposal to target Hezbollah and the Muslim Brotherhood as organizations. They claimed Ali advocates only targeting such groups’ identifiably “violent” members, and ignoring all other elements of their activities that may be subversive of U.S. interests.

These are recognizable as Obama-era policies — the “smart set” foreign policy strategies behind the Obama administration’s disastrous “Countering Violent Extremism” programs. This is the thinking that marched the Middle East to bloody catastrophe: a half-million dead in Syria.

Yet General McMaster appointed Ali as NSC Senior Director on Counter-Terrorism, and purged the NSC of voices supporting President Trump’s Mideast agenda. Then McMaster reportedly sat Ali in front of an Israeli delegation visiting the White House to share its concerns about Hezbollah.

I have previously reported here at PJMedia of an extensive public relations push — coordinated by administration supporters of General McMaster — to encourage conservative outlets and think-tanks to reject claims that McMaster is antagonistic to Trump’s foreign policy and to the State of Israel in general. That push was remarkably successful: an online search for critical McMaster stories from the right will reveal such articles virtually halted in mid-August.

The broader questions of President Trump’s continued silence are more difficult to read. None of the sources contacted for this article believe the president has fundamentally shifted his thinking.

Trump likely understands he would not have defeated Hillary Clinton without stating “radical Islamic terrorism.” Yet sources could offer only speculation as to how Trump intends to win his Middle East agenda while saddled with a National Security Council subversive to those goals.