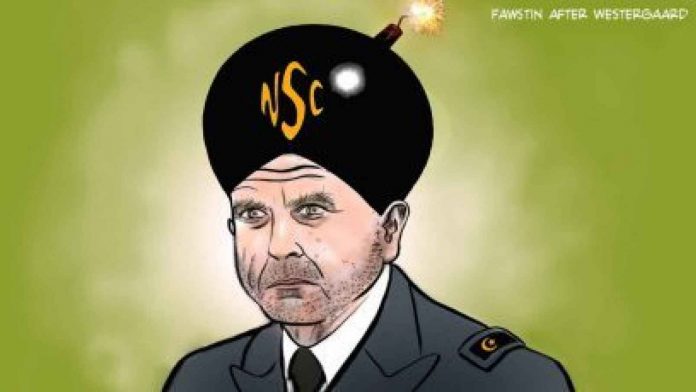 This is only a report. But it unfortunately fits with far too much of what has been happening at the NSC. McMaster has purged supporters of the foreign policy that Trump ran on while retaining and elevating Obama holdovers. The NSC is at the center of a political conflict that keeps getting uglier. And it’s now reportedly impacting our ability to coordinate with our allies.

During the week of August 27, an Israeli delegation met with members of the National Security Council (NSC) at the White House to discuss the current threat to Israel by the terror group Hezbollah.

Israel believes this threat is currently dire. This meeting preceded a two-week long Israeli Defense Forces (IDF) exercise to rehearse for possible war with Hezbollah. The Jerusalem Post described this exercise, which commenced on September 4 and is ongoing, as the IDF’s largest in 20 years.

Hezbollah has been a U.S.-designated Foreign Terrorist Organization since 1997. However, National Security Adviser H.R. McMaster reportedly brought NSC Senior Director on Counter-Terrorism Mustafa Javed Ali to the White House meeting with Israel. Ali, a McMaster appointee, is described by a senior administration source as being “opposed to Hezbollah’s designation as a terrorist organization.”

What then transpired at the meeting has been confirmed to PJ Media by several administration sources, by members of non-governmental organizations involved in national security, and by a source within the Israeli government.

Such a demand would very nearly have been unprecedented. It means, point blank, that the Israelis were saying they don’t trust the security of any meeting with Ali in it.

We’ve been talking a lot about leaks coming out of the NSC. This is far worse than a mere leak. It’s a major ally declaring that it doesn’t trust the security of the NSC.

And we have a major problem when the  NSC Senior Director on Counter-Terrorism is suspected of playing for the other team. The NSC has become dangerously toxic under McMaster. And that’s poisoning the policy well.

Earlier this year, Ali was rumored to have caused the cancellation of a scheduled talk to the NSC by Ayaan Hirsi Ali on account of her “Islamophobia.”… Sources within the Trump administration have confirmed to PJMedia that this rumor about Mustafa Javed Ali was correct: Mrs. Ali had been invited to speak to the NSC. She was later disinvited due to Javed Ali’s interference.

I have heard the same report.

Yet senior administration sources are far less charitable about McMaster and his appointee Mustafa Javed Ali. As mentioned above, they described Ali as taking the breathtaking position that Hezbollah should not be a U.S.-designated foreign terrorist organization. They described Ali as holding the same view regarding the Muslim Brotherhood.

They claimed Ali’s work within the NSC essentially amounts to him attempting to prevent the Trump administration from using any of the means at its disposal to target Hezbollah and the Muslim Brotherhood as organizations. They claimed Ali advocates only targeting such groups’ identifiably “violent” members, and ignoring all other elements of their activities that may be subversive of U.S. interests.

And this is undermining our national security and taking us back to the Obama era in more ways than one.

Friction between General McMaster and the Israeli delegation did not end with Israel’s demand that Ali leave the room.

Sources reported that McMaster went on to explicitly dismiss the Israelis’ specific concerns about Hezbollah.

In particular, the Israelis expressed concern that the “safe zone” currently being established within Syria — an idea that had been vociferously supported by Hezbollah’s sponsor, Iran — would immediately become a safe zone for Hezbollah to operate.

McMaster was said to “blow off” this major Israeli concern, and to be “yelling at the Israelis” during the meeting.

This seems to be fairly commonplace behavior by McMaster with officials in the administrations. Why should the Israelis be any different?