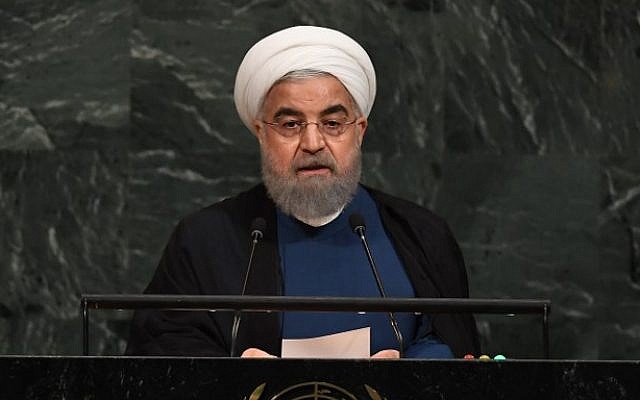 NEW YORK — Iran’s President Hassan Rouhani on Wednesday derided US President Donald Trump as a “rogue newcomer” and Prime Minister Benjamin Netanyahu as the leader of a “rogue and racist regime,” and vowed that Tehran would respond “decisively and resolutely” if the Iran nuclear deal is remade or canceled.

In an address to the UN General Assembly, Rouhani also castigated “the ignorant, absurd and hateful rhetoric” delivered before the Assembly on Tuesday — when Trump and Netanyahu spoke — saying the speeches were “filled with ridiculously baseless allegations.”

Rouhani declared that the Iranian nuclear deal, since it was backed by the international community and endorsed by the UN, could not be legitimately scrapped or amended, as Netanyahu demanded Tuesday and as Trump has indicated he is considering.

“I declare before you that the Islamic Republic of Iran will not be the first country to violate the agreement, but it will respond decisively and resolutely to its violation by any parter,” he pledged.

Turning to Trump, he said, “It would be a great pity if this agreement were to be destroyed by rogue newcomers to the world of politics… The world will have lost a great opportunity.” 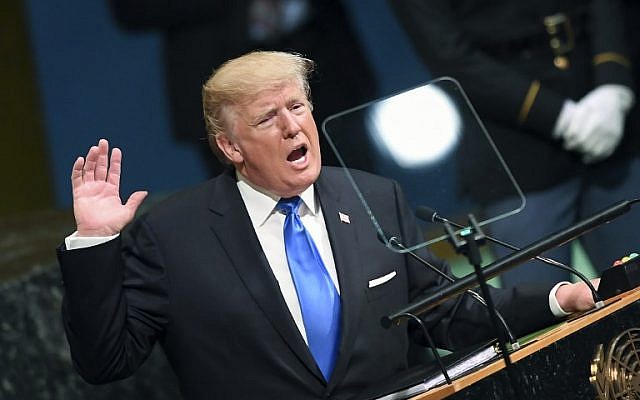 In violating its commitments, he charged, “the new US administration only destroys its own credibility and undermines international confidence in negotiating with it or accepting its word or promise.”

As for Israel’s criticism of the deal, Rouhani said it was “reprehensible” that a rogue regime “that threatens global security with its nuclear arsenal… has the audacity to preach to peaceful nations.”

As ever, Rouhani, while promising that Iran seeks the path of moderation, international cooperation and peace, did not mention the state of Israel by name in his speech. Instead, he called the unnamed Jewish state “a rogue and racist regime” that has “usurped” the Palestinians’ land. “It is not possible for a rogue and racist regime to trample upon the most basic rights of the Palestinians, and be usurpers of this land and enjoy security,” he said.

“We are the same people who rescued the Jews from Babylonian servitude,” Rouhani declared. “Centuries ago we supported the rights of the Jewish people, and today we insist upon the restoration of the rights of the Palestinian people.”

Where Netanyahu and Trump had castigated Iran for its terrorist activities, Rouhani claimed Iran was “on the front lines of fighting terror and religious extremism in the Middle East.”

“We in Iran strive to build peace,” he said. “We never condone tyranny. We never threaten anyone, but we do not tolerate threats from anyone.”

He said Iran has never sought nuclear weapons, and that its military arsenal, including its missiles “are solely defensive deterrence.”

Trump is due to report to the US Congress by October 15 on whether he can certify that Iran is upholding its side of the accord, under which it accepted limits on its nuclear program.

On Wednesday, Trump told reporters that he had reached a decision, but did not elaborate.

“I have decided. I’ll let you know what the decision is,” he said.