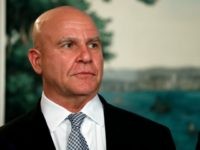 “It’s inconceivable that it was not intentional for him,” said Gaffney of Trump’s not using the term “radical Islamic terrorism” in his speech.

Gaffney went on to say United States National Security Advisor H. R. McMaster “has obviously prevailed on the president” and others in getting them to drop the term.

“It’s just wrong not to be describing the underlying problem here,” said Gaffney, invoking the phrase “sharia supremacism.” He went on, “Whether you call it that, or radical Islamic terrorism, or jihadism, you’ve got to get at it if you’re going to defeat it.”

Gaffney insists that the administration’s failure to use said terminology is a key failure in the fight against terrorism.