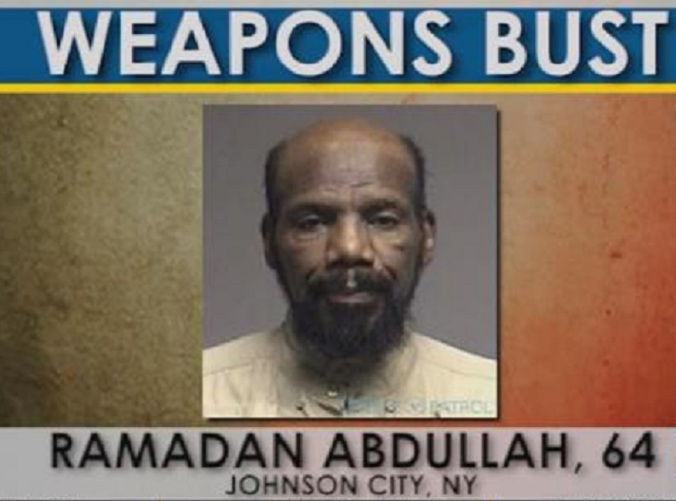 The Johnson City man facing 16 charges in a massive weapons bust was granted release on bond Tuesday, as he awaits a Nov. 13 trial in Broome County Court.

Ramadan Abdullah, 64, has pleaded not guilty to an indictment charging more than a dozen felonies connected to his arrest in June, which police described as being one of the area’s largest gun takedowns in recent memory.

Judge Kevin Dooley granted Abdullah’s release from jail on bond Tuesday, after defense lawyer Matthew Ryan presented the court with two Binghamton properties that would be put up for collateral.

Bail is used to ensure defendants will appear for trial and all pretrial hearings for which they must be present.

If Abdullah fails to appear in future court dates, the state could collect at least $50,000 through forfeiture of the two properties, which were put up for bond by a friend of the defendant.

Before granting the release, Dooley initially stated one of the properties by itself was not sufficient collateral, but he agreed to the bail bond when the second property was put forward.

The judge also warned Abdullah that pretrial and trial proceedings could be held in his absence if he fails to show up in court, even though he has a constitutional right to be present at his trial.

“I’m not giving up any of my constitutional rights,” Abdullah said in court Tuesday.

Pretrial hearings in the case will be held Oct. 6.

Prosecutors say Abdullah was initially taken into custody May 31, after a shoplifting complaint at the Gander Mountain store in Johnson City. Nobody saw him steal anything, but police found him with suspected stolen ammunition.

On June 2, police found numerous illegal firearms and  about 10,000 rounds of ammunition ranging from .38-caliber to armor-piercing incendiary rounds as well during searches of storage units and other properties connected to Abdullah.

None of the firearms were registered to Abdullah, according to New York State Police Maj. James Barnes, and that alone made it illegal for him to possess them.

More details and a full listing of the weapons seized and Abdullah’s links to the Islamic compound in this previous Creeping Sharia post: New York: Muslim arrested with large weapons cache destined for terror-linked Islamic compound