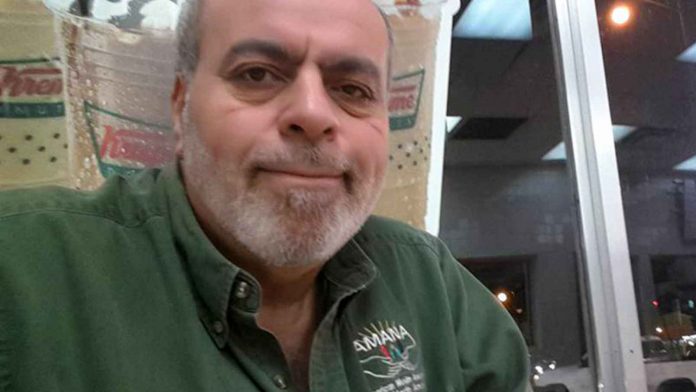 Sofian Abdelaziz Zakkout, the President of the Miami, Florida-based American Muslim Association of North America (AMANA), loves to promote anti-Semitism. The vehicle he uses to do so is social media. This past July, he took to Facebook to advertise a video of a speech made by Nation of Islam (NOI) leader Louis Farrakhan, a known anti-Semite who has described Judaism as “a gutter religion” and Adolf Hitler as “a very great man.” Zakkout’s spread of bigotry cannot and should not be ignored.

On July 29, 2017, Sofian Zakkout posted on his Facebook page a four-minute portion of a speech given by Louis Farrakhan at the Nation of Islam’s February 2017 Saviors’ Day. The video begins with Farrakhan castigating Israel and Israeli Prime Minister Benjamin Netanyahu – saying Netanyahu has no “permanent home” there – and then quickly devolves into a ferocious hate fest against Jews, repeatedly labeling the Jewish people “Satan.” Farrakhan states (with shouts of agreement from the audience), “Really, they’re not Jews. No, that’s Satan.You should learn to call them by their real name, ‘Satan.’ You’re coming face to face with Satan, the Arch Deceiver, the enemy of God, and the enemy of the righteous.”

In the past, Zakkout has gotten in trouble for spreading such hate. In July 2010, the Anti-Defamation League (ADL) condemned Zakkout and his group AMANA for featuring what the ADL called a “venomous” anti-Semitic video on the AMANA website. The video was produced by and featured white supremacist and former Ku Klux Klan Grand Wizard David Duke. Zakkout has since posted a number of Duke videos onto social media and has praised Duke as “David Duke, a man to believe in!”

Zakkout has attacked Jews, himself.

In July 2014, Zakkout organized a pro-Hamas rally held outside the Israeli Consulate in downtown Miami. On video, Zakkout is shown smiling, as event goers repeatedly shout, “We are Hamas.” After the rally, Zakkout wrote the following in Arabic, above photos from the event: “Thank God, every day we conquer the American Jewslike our conquests over the Jews of Israel!” He signed it “Br. Sofian Zakkout.”

In December 2015, Zakkout posted a photo of Israel Defense Forces (IDF) Chief of Staff Gadi Eizenkot, who is a decorated veteran of many different wars and battles fought by Israel over the last three-plus decades. Above the picture of Eizenkot, Zakkout wrote in Arabic, “You’re a Jew, the grandson of a monkey and a pig.” He signed it “Sofian.” This is one of many times Zakkout has referred to Jews as “monkeys and pigs.”

In February 2016, Zakkout circulated on social media a report claiming that “the Holocaust was faked.” It begins: “The alleged ‘Holocaust’ of ‘6 million Jews’ at the hands of Adolf Hitler and National Socialist Germany during WWII is the biggest lie ever foisted upon humanity.” It was produced by The Realist Report, an anti-Jew, anti-black, anti-gay independent media outlet, which describes Hitler as “the greatest leader in modern Western history.”

In April 2016, Zakkout promoted another report discussing the absurd notion of Jewish involvement in the September 11th attacks on the World Trade Center and the Pentagon. A photo from the report shows the burning towers with a Jewish Star affixed to one. The report begins, “It ain’t debatable! Soup to nuts, top to bottom, the 9/11/01 terrorist attacks on New York City and Washington D.C. were an ‘Israeli’-Jewish job.” The website which published the report and which Zakkout linked to is Mouqawamah Music, a site that openly calls for “Death to Israel” and labels the Jewish religion “wicked and filth-ridden.”

In June 2016, Zakkout clicked ‘like’ under someone else’s Facebook posting on Zakkout’s personal Facebook page of a grotesque cartoon containing a worried-looking religious Jew hiding behind an animated tree with a bearded man brandishing a rifle coming towards them. The tree is speaking to the man in Arabic, saying “Oh Muslim! Oh Muslim! There is a Jew behind me. Come and kill him.”

This past February, Zakkout once again targeted Jews with the centuries-old anti-Semitic canard of questioning a Jew’s loyalty to his/her country, in this case the United States. He wrote in Arabic, “I wonder, if the US Army decides to invade Israel, what stand the American Jews will take!! I am sure the American Muslims will stand with all strength against Israel!”

Anti-Semitism is thriving in South Florida, and one of its main sources is Muslim leader Sofian Zakkout. While some in the Muslim community are attempting to extinguish extremism coming from their fellow Muslims, people like Zakkout and Louis Farrakhan are feeding it with the worst of bigotry.

Zakkout and Farrakhan continue to engage in radicalization and incitement with impunity. These types of actions need to be shunned and repudiated by Muslim and non-Muslim alike. There can be no place in our society for hateful rhetoric such as this.

It must be exposed and ended, once and for all.