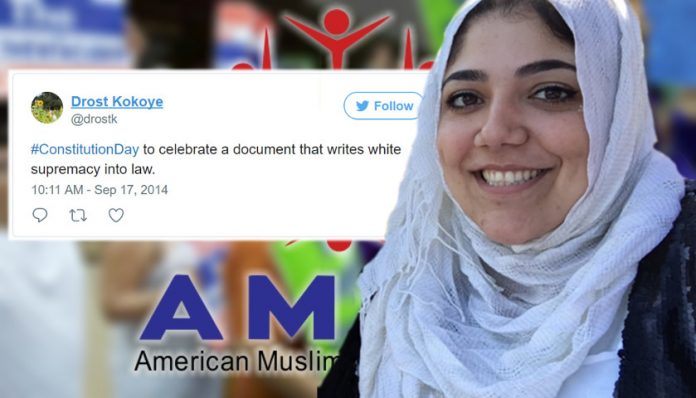 Kokoye is a Kurdish refugee who, as a young child, came to live in Nashville, grew up there and was educated in Nashville’s public schools. While attending college at Middle Tennessee State University, she worked for the TN Immigrant & Refugee Rights Coalition (TIRRC) as a “Multicultural Organizer.”

TIRRC offers workshops encouraging immigrants to become citizens and assists them through the naturalization process, after which TIRRC says they can represent “the immigrant vote” in elections.

In 2012, Kokoye was featured in TIRRC’s “New American Voter” campaign:

Voting gives me the opportunity to voice what not every immigrant or refugee can yet. It’s my chance to choose the people and laws that will allow others to practice this freedom I now have.

While still in college and serving as the “Civic Engagement Coordinator” for the American Center for Outreach, a Muslim-centric organization inter-connected to the AMAC, Kokoye rejected her status and identity as an American citizen:

Kokoye’s extreme anti-Americanism fits the findings of The Hudson Institute’s America’s Patriotic Assimilation System is Broken report. Using a quantitative analysis of interactive survey data comparing native-born and naturalized citizens, the study concluded that a “large ‘patriotic gap’ exists between native-born citizens and immigrant citizens on issues of patriotic attachment and civic knowledge. Despite what some may believe, native-born citizens have a much higher degree of patriotic attachment to the United States than naturalized citizens.”

According to the report’s authors, there are different reasons that “the patriotic assimilation of immigrants to American identity is weak and ambivalent” but attribute part of the problem to American leaders having moved the norm for immigrant assimilation away from “Americanization” and replacing it with a multiculturalism approach “that emphasizes ethnic group consciousness at the expense of American common culture.”

Analysis of the survey data that support the Hudson Institute’s conclusions include:

Changes in U.S. demographics has been used to justify retaining multicultural assimilation policies, whereas changing demographics in the late 19th and early 20th centuries resulted instead in policies that emphasized national unity over diversity:

The decision ultimately rested on the firm moral vision of the concept of equality of individual citizenship the foundation of American liberal democracy. In a liberal constitutional democracy such as ours, individual citizens voluntarily join a wide variety of groups, but their legal rights are not supposed to be based on the ethnic or racial group into which one is born.

Results of a 2015 Polling Company survey of Muslims in the U.S. released by the Center for Security Policy found that “a majority (51%) agreed that ‘Muslims in America should have the choice of being governed according to shariah [Islamic law] and “[m]ore than half (51%) of U.S. Muslims polled also believe either that they should have the choice of American or shariah courts, or that they should have their own tribunals to apply shariah. Only 39% of those polled said that Muslims in the U.S. should be subject to American courts.”