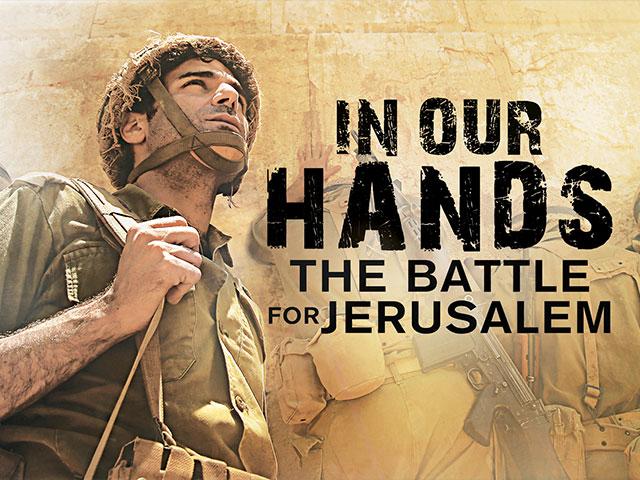 Christian love demanded that they try and convert the Jews, but more often than not, Jews felt more wrath than grace.

Earlier this summer, hundreds of Israelis packed the Jerusalem Cinematheque theater for the premiere of the Six Day War documentary, “In Our Hands.” The film traces the steps of the 55th Paratroopers Brigade through firsthand interviews with IDF soldiers and historical battle reenactments. Following the screening, an emotional curtain call featured four of the now elderly paratroopers who appeared in the film. They shuffled onto the stage to receive bouquets of flowers and a standing ovation.

There was nothing unusual that evening to distinguish this event from any of the other Six Day War commemoration events that took place in Israel or abroad, except for the evening’s host – Gordon Robertson, CEO of the Christian Broadcasting Network (CBN).

While the movie was produced by CBN, which was founded by Gordon’s father and televangelist Pat Robertson in 1961, it contained no overtly, or even covertly, Christian messages.

“This is a film made by Christians, but it is not a Christian film,” Erin Zimmerman, the film’s director, explained. “The Six Day War is not a Christian story; it is first and foremost a Jewish and Israeli story and I wanted to honor that.”

This desire to honor Israel without strings attached and devoid of proselytizing is one of the newest, and most welcome, trends in Christian Zionism. The relationship between Christians and Jews is long and complex, and a fascinating case study in how shifting theology correlates to changes in behavior.

A short overview of some major shifts in Christian beliefs toward Israel can explain this new era of Christian Zionism marked by greater sensitivity and respect toward the Jewish People.

When it came to relating to Judaism, Christianity developed what has become known as “replacement theology.” The idea is that, as a punishment for rejecting Jesus, God replaced Israel with the Church and the original Bible (Old Testament) with a new one. It didn’t take long for Jews to go from being viewed as replaced to rejected, despised and, ultimately, hated.

Christian love demanded that they try and convert the Jews, but more often than not, Jews felt more wrath than grace. One could draw a direct line from replacement theology to the blood libels, forced conversions, inquisitions and expulsions that shaped the Middle Ages.

During the modern period, Christianity underwent an internal revolution known as the Protestant Reformation, which paved the way for a new approach for relating to Jews. In the 16th century, Martin Luther battled against the Catholic Church and advocated for individuals to read the Bible, made widely available for the first time through the newly invented printing press, for themselves. No longer was biblical interpretation in the hands of the ruling elite. Rather, everyone was encouraged to read and understand God’s word for themselves, which they did in large numbers.

It doesn’t take much of a bible scholar to recognize that one theme appears on almost every page and in nearly every chapter of this holy text ‒ that is the relationship between the land and the people of Israel. With an open mind and in the absence of previously held interpretations, a literal reading of the text started to lead some Christians to begin viewing Jews differently.

For centuries, the people of Israel had been relegated to sub-human status and the land of Israel reduced to a metaphor. However, the age of enlightenment allowed Christians to see the Jews as real people and, in the era of exploration, they discovered that Israel was an actual place. More and more Christians started reading the bible literally and saw the prophecies of the return to Zion as being something within worldly reach.

The Puritans were among the first Reformed Protestants who began praying for a Jewish return to their homeland and were responsible for introducing the idea of Jewish restoration to America. While popular in England, as well, Restorationism (also described as Christian Primitivism) struck a noticeable chord in the New World. US presidents studied Hebrew, and American scholars traveled to Palestine to map out the area and dig up archeological relics.

At the time, Restorationism was steeped in replacement theology, which, even in its benign form, calls for proselytizing the Jews. The motivating force behind Christian efforts to restore the people to the land was best summarized by the influential pastor Charles Spurgeon who preached in 1864: “We look forward, then, for these two things. I am not going to theorize upon which of them will come first ‒ whether they shall be restored first, and converted afterwards ‒ or converted first and then restored. They are to be restored and they are to be converted, too.”

Restorationists were among Theodor Herzl’s most ardent supporters. The Reverend William Hechler, an Anglican clergyman, dedicated his life to assisting Herzl upon reading “The Jewish State,” which was published 12 years after his own treatise, “The Restoration of the Jews to Palestine.” Hechler immediately began to introduce Herzl to Europe’s leading political rulers, including German Kaiser Wilhelm, Queen Victoria of England and the Sultan of Turkey. Appreciatively, Herzl invited Hechler, in 1897, to the first World Zionist Congress in Basel as a non-voting delegate and the “first Christian Zionist.”

The establishment of the State of Israel, and its hard-to-explain successes, chipped away at replacement theology from the opposite direction. Christians began asking themselves: If God had rejected Israel, then how come the Jews are so successful making the deserts bloom and defending themselves from their enemies? The perception that many biblical promises were being fulfilled seemed like clear and convincing evidence that God had not broken His covenant with Israel, after all.

In recent decades, Christian Zionist leaders and organizations have emerged all over the world. In addition to their political and philanthropic support of Israel, Christian leaders are, more significantly, for the first time publicly rejecting replacement theology.

Perhaps the best-known group, the International Christian Embassy Jerusalem, has a lengthy essay on their website explaining why they renounce replacement theology. Similarly, Pastor John Hagee has used his influential ministry, Christians United for Israel, to unreservedly, “expose the lies of replacement theology.”

To be sure, these Christian Zionist voices are still a minority within the Church.

Nevertheless, we have entered a new age of Jewish-Christian relations.

Chris Mitchell, CBN’s Middle East bureau chief, said “In Our Hands” doesn’t ever mention Jesus, quote from the New Testament or push a Christian agenda. In that way, “I feel that the movie is a gift to the Jewish people honoring the soldiers who fought in the Six Day War and the Jews who waited over two millennia to return to Jerusalem.”

I asked Mitchell if CBN would have been as sensitive had the movie been released upon the 25th anniversary of the 1967 war in the early 1980s. He said, “There has definitely been a remarkable development of deeper relationships between Jews and Christians in recent years. A greater understanding of the Jewish community and getting to know each other better has led to more sensitivity.”

Christian theology has shifted since its inception and has never been as respectful toward the Jewish people than it is now. The growth of Christian Zionism is a direct outcome of this change, so it is no wonder that Israel is enjoying unparalleled support from large segments of Christianity. After 2,000 years, Christian-Jewish relations are entering a new, golden era of restoration without replacement.

Tuly Weisz is an Orthodox rabbi and founder and director of Israel 365, the publisher of ‘Breaking Israel News’ and the editor of The Israel Bible.