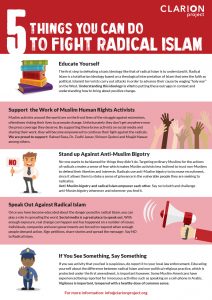 As I read through this list of “things” that Clarion is promoting to, as they  put it, “Fight Radical Islam”, I had to respond and do my own challenge to their witless statements here.  The one thing they have stated throughout this list is calling the issue: “Radical Islam”.   It is purely Islam… read, follow, associate, and live out the mandates of Islam as required by their Quran and Hadith… then it is NOT radical, you are a devoted follower of Islam.   STOP calling it “radical”!   If that word alone was removed, this list would be better.

Now to the 5 listed Action Items:

So… here’s my take on this Clarion article.  They have some of this right.  But “some” is NOT good enough!  Defeating Islam across America and the world requires us all to be in synch on 1. Naming the Enemy and 2. Combining forces to speak truth against an onslaught against the U.S. Constitution and Western Civilization!