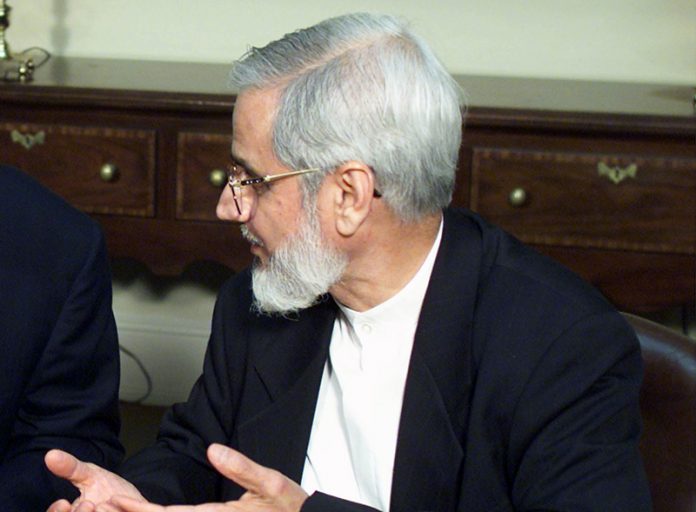 Muzammil Siddiqi, a former president of the Islamic Society of North America who still sits on its board, has called homosexuality a “moral corruption” and stated that he supports laws in countries that execute homosexuals. (Image source: Mark Wilson/Getty Images)

“Islam is a religion of peace, but you can’t have peace without justice,” said self-styled “civil rights activist” Linda Sarsour at the Muslim American Society-Islamic Circle of North America (MAS-ICNA) convention in December 2016. Sarsour, who describes herself as a “Palestinian-American feminist,” is but one example of a radical Muslim in the West who has carefully cultivated an image of herself as righteously preoccupied with liberal values and social justice — and Islamist organizations, such as MAS, ICNA and the Islamic Society of North America (ISNA), have tried to do the same.

A highlight reel from the MAS-ICNA convention features author Yasmin Mogahed declaring, “We have to care about the pain and struggles of others,” as well as a prominent imam, Omar Suleiman, asking, “What have we done for the marginalized in this country?”

In a promotional video released in 2016, the organization’s president, Azhar Azeez, boasts of “bringing a very positive impact to our communities across the nation.”

According to Muslim feminist bloggers, however, who write regularly for the site muslimgirl.com, MAS, ICNA, and ISNA are blatantly racist. One such observer, in a piece titled “Mainstream Islamic Conferences Have a Longstanding History of Normalizing Anti-Blackness,” writes:

“When I look at mosques that perpetuate patriarchal violence, I see it as powerless men trying to feel in control. Conferences are no different. Often times, it’s non-Black Muslims (mostly Arab and Desi) who organize these tone-deaf conferences, and use them as tools of oppression to silence the voices and contributions of those who are more marginalized (mostly Black Muslims).”

“Remember last year when ICNA asked participants in a speed dating event what skin color was preferred for their potential partner? The fact that they didn’t understand why that was problematic the first time is enough of an indicator.”

Another blogger on the site recounts attending the April 2017 ICNA convention in Baltimore — “one of the most historically black cities in our nation” — and discovering that not even a panel on “America’s Original Sins: Racism and Social Inequality” included a black, Latino, or female speaker.

Although this was not true of the MAS-ICNA convention, which did feature one black Muslim on the podium, the speaker was Imam Siraj Wahhaj, who once preached that Muslims should not “take into [their] intimacy those outside [their] race,” advised his followers to guard against homosexuals (“the disease of society”), and even served as a witness for the defense in the criminal trial of convicted terrorist, the “Blind Sheikh,” Omar Abdel Rahman.

Nor is the shroud of progressivism hiding closeted bigotry at Islamist events restricted to racial discrimination. Despite what Linda Sarsour might have us believe –“We don’t even have this [same sex marriage] conversation [in the Muslim community]” — hateful views on homosexuality such as those expressed by Wahhaj are common among MAS-ICNA and similar groups. A case in point is this year’s ISNA convention, where Sarsour spoke. At the event, representatives of an organization called Muslims for Progressive Values (MPV) were booted from the venue specifically because of their LGBTQ- and women- focused advocacy. According to MPV’s press release, they and their event partners, Human Rights Campaign (HRC), were asked to leave by ISNA officials on the grounds that they “don’t fit in” at the “religious, private, and family-oriented event.”

Such exclusion is neither unusual nor surprising. In fact, all conferences held by these “mainstream” Islamic groups include speakers who advocate extreme violence against the LGBTQ community. Take this year’s ISNA annual convention in Chicago, for instance, which hosted Muzammil Siddiqi, a former president of ISNA, who still sits on its board. In an interview published on the ISNA website, Siddiqi called homosexuality a “moral corruption,” and explicitly stated that he supports laws in countries that execute homosexuals. The convention also included Yasir Qadhi, dean of academic affairs at AlMaghrib Institute, who has been recorded teaching students that killing homosexuals is part of Islam.

If Sarsour and her fellow Islamists in the United States are to be believed, they work to “makeAmerica better…” “…out of love” for fellow Americans. Yet, their behavior tells another story — one of closeted bigotry and deceit — all for the purpose of legitimizing their own false claims to the leadership of mainstream Muslims. Sarsour, like MAS, ICNA, and ISNA, might purport to seek justice, but theirs is not a justice that will ever lead to ethnic and religious tolerance. It certainly will not bring about the “peace” that Sarsour pretends to promote.