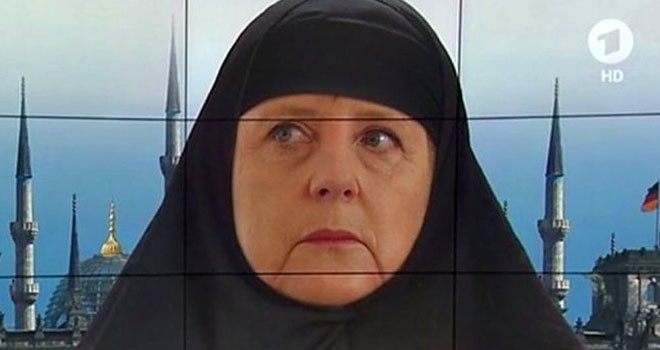 Submission. That’s what the word “Islam” means. Muslims must submit to Allah, and the rest of the world must eventually submit to Islam. Submission does not necessarily require conversion, but it does require that one acknowledge the superiority of Islam, pay the jizya tax, and, in general, keep one’s head down.

Europe is currently in the process of submitting to Islam, and America also seems destined to eventually submit. If you have young children or grandchildren, it’s likely that they will have to adapt at some point to living in a Muslim-dominated society. It won’t necessarily be a Muslim-majority society because, as history testifies, Muslims don’t need a majority in order to successfully take control of non-Muslim societies.

If and when Islam persuades America to submit, it most probably won’t be through force of arms. The civilizational struggle in which we are now engaged is primarily a culture war. America used to be good at cultural warfare because America once had cultural confidence. The Cold War was in large part a cultural war, and America won it because it didn’t have qualms about demonstrating the superiority of the American way to the Soviet way.

But times change. These days, may Americans would rather shred their culture than spread it. Cultural shame rather than cultural pride rules the day. And, not surprisingly, people who are ashamed of their culture can’t be counted on to defend it. Those who are anxious to pull down statues of Washington, Jefferson, and Columbus are unlikely to put up much resistance to Islam’s cultural aggression. Instead, they will be disposed to facilitate it.

Islam, on the other hand, is full of new-found cultural pride. After the defeat of the Russians in Afghanistan, the overthrow of the Shah in Iran, and the toppling of the Twin Towers, Muslims could once again believe that Allah had destined them to subjugate the world to Islam. At the same time that Americans began to doubt their own cultural heritage, Islam undertook a remarkable campaign to export its ideology to the rest of the world. Enabled by massive oil revenues, Saudi Arabia and other Gulf States funded the building of mosques and madrassas all over the world. While America was investing heavily in new weapons systems, the Gulf States were placing their bets on a weaponized religious system.

And there’s the rub. Buoyed by the initial successes in Iraq and Afghanistan, Americans began to think of the war against jihad as primarily a military affair. In the process of defeating the enemy on the battlefield, we lost sight of the cultural side of the struggle. But Islamists stayed focused on the larger picture. While we were winning the armed battles in Afghanistan and Iraq, the cultural jihadists were winning battle after battle on the culture front.

Indeed, most of the Islamist victories came without a struggle. Key cultural institution in the West simply acquiesced to whatever it was that the Islamists wanted. Hijabs in the workplace? Diversity demands it. Prayer breaks for Muslim employees? Well, no more than five a day. Islam-friendly curriculums in K-through grad-school? Think of it as affirmative action for years of neglect. More Muslim immigrants? It would be against our values to say no.

A culture war can only be fought by cultural institutions—schools, churches, political and civic organizations, and so on. As things stand, however, none of our cultural institutions have shown much evidence that they are equipped to fight a culture war with cultural jihadists. The chief reason this is so is that most of these institutions are still fighting the last culture war—the civil rights struggle and the concomitant war against intolerance, racism, and bigotry. This “old-war” mentality makes it nearly impossible for our cultural and civic leaders to resist Islamization. Because so many Americans still live mentally in a time when intolerance was considered the greatest evil, they have difficulty understanding that an indiscriminate tolerance can father just as many sins.

One way of grasping the vulnerability of our society to Islamization is to ask “Who’s going to stop it?” Where, exactly, are the forces of resistance?

The media? The media is still trying to find a motive for the 9-11 attack. That’s because it still won’t make the connection between Islamic terror and Islamic belief. In general, media people see it as their duty to put the best possible face on all things Islamic. Scratch the media as a source of resistance.

The Church? As with college administrators, many Church leaders are deeply mired in multicultural ideology. They are constantly on the lookout for offenses against the “other.” Accordingly, American bishops seem to think that “Islamophobia” poses a grave threat to society. Many of them seem more concerned about anti-Muslim bigotry than about the victims of Islamic terror. To prove that they themselves are not “Islamophobes,” the USCCB operates one of the largest programs for resettling refugees from Muslim countries into the U.S. Besides facilitating Muslim migration, American, as well as European bishops, have facilitated the migration of Islamic beliefs. On numerous occasions, prominent clergy have pronounced these beliefs to be benign and peaceful, and thus deserving of a warm welcome. In general, Church leaders see themselves as friends and protectors of Islam. Given their current mindset, the bishops are unlikely to recognize an Islamic cultural putsch, let alone resist it.

Big Business? Corporations also qualify as cultural institutions. Much of our understanding of what is culturally acceptable and unacceptable is picked up in the workplace. This can be a good thing and often was in the past. Unfortunately, many corporations now reflect and magnify some of the worst cultural trends: arbitrary speech codes, draconian diversity policies, transgenderism, and the like. Currently, several large corporations are using their leverage to suppress speech that is critical of Islam. Giant companies such as PayPal, Google, Facebook, and Twitter are actively trying to shut down websites and individuals that provide accurate information about Islamic cultural jihad. The media monopolies are playing the role that the Ministry of Truth played in Orwell’s 1984. All the really useful information about Islam that has been painfully accumulated in recent years is being quietly dropped down the memory hole.

Why are the counter-jihad sites being shut down? Because they supposedly are “intolerant” and “racist.” Here we come back to the “old-war” mentality. The corporations, the schools, the churches, and the media are ready to do battle with racists, sexists, homophobes, Islamophobes, and transgenderphobes, but they lack the mindset that would allow them to resist the long march through the institutions being conducted by determined and skillful cultural jihadists. In short, their energies are focused on evils that have long been in retreat or on non-existent evils (transgenderphobia, etc.). Meanwhile, the much larger threat posed by Islam draws ever closer.

The people who might be expected to fight this new culture war are scarcely aware of its existence. They are too busy championing the cause of newly invented “civil rights.” Fifty years ago they would have been on the cutting edge, now they are on the edge of irrelevancy.

Nowadays, the cutting edge is elsewhere. And when the “cutting-edge” cultural and business elites meet the cutting-edge of Islamization, they will almost inevitably submit to it. That is what they have already begun to do. And as the culture war with Islam heats up, the submission process will only accelerate.

Editor’s note: Pictured above is a mock photograph, dubbed the ‘Muslim Merkel’, showing the German Chancellor surrounded by minarets adorning the Reichstag building.