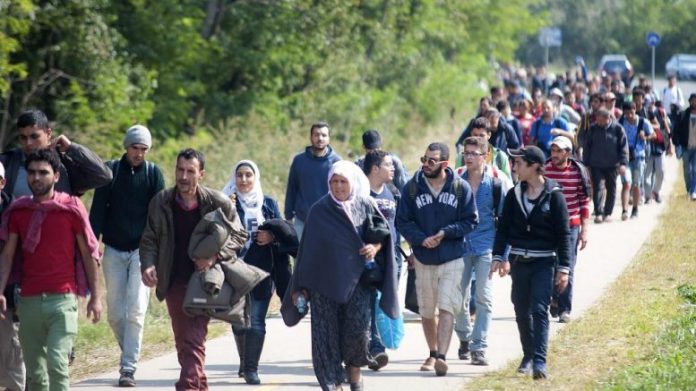 Hundreds of thousands of Syrian refugees and others have been displaced by the conflict in Syria. (Photo/ Csaba Krizsan/MTI via AP)

A group of Muslim refugees is set to arrive in the U.S. from resettlement camps in Australia where they have been held for years.

The first party to arrive in the country includes 52 people who are already in-transit from Australia to Los Angeles.

According to a refugee advocate, the group includes 25 people from a male-only camp in Papua New Guinea and 27 others from a facility in Nauru.

They will be resettled in Georgia, Oregon, Colorado, Texas, and Arizona.

In return, Australia will accept central American refugees from a camp in Costa Rica.

Under the Obama-era deal, more than 1,200 refugees in Australian detention centers will come to the U.S.

Most of the new arrivals are originally from Afghanistan, Iran, and Sri Lanka.

President Trump, who has previously criticized the deal, said he would only honor it if the arriving migrants undergo extreme vetting procedures.

“This is huge for them, however, we still have over 2,000 people who are in an extremely dangerous situation, who have been suffering through this uncertainty for years and years, and we need to have a solution for everyone who’s been taken offshore through this process,” said Graham Thom of Amnesty International.

Critics say the resettlement deal is unfair to the U.S. as central American migrants do not pose a threat of radical Islamic terror to Australia.