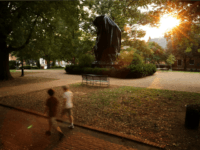 The raging argument surrounding America’s “racist” monuments has dominated the news cycle in the U.S. of late. Breathless, hyperbolic, hot takes of horror and emotion, interspersed only by coverage of natural disasters.

The murder of Heather Heyer, the anti-Semitism on display in Charlottesville, the Nazi flags, none of that can or should be minimized. But the discourse regarding monuments themselves, and the historical revisionism of the debate should be put into perspective.

As much as America is culturally self-contained, she does not operate within a vacuum, as the nation’s sometimes ill-advised foreign involvements since 1975 demonstrate.

Europe has experienced, this year alone, 35 attempted or executed terrorist attacks. That this is not major news in the United States speaks to a wilful insularity on behalf of the establishment media which picks and chooses what lessons the U.S. can learn from abroad.

Perhaps it is because journalists in New York City or Washington, D.C. are fundamentally lazy. For this reason I have put together this map, as a tool by which to assist them in navigating the issue.

While fledgling or dwindling white supremacist groups haunt the dreams of Manhattan liberals, Islamic extremists stalk the streets of Europe.

There has, on average, been a terrorist attack in Europe every seven days. The continent has seen 72 deaths and over 430 injuries this year as a result. Only one of those deaths, and 10 of the injuries, were not migration-related or Islamic in nature.

This week, the European Union’s anti-terror chief admitted there are around 35,000 Islamic fanatics in Britain, with more than 50,000 across the continent.

Those seeking to minimise the issue often point to the Troubles — Britain’s war against terrorist Irish republicans — or even to obesity and car accidents as a means by which to diminish how life is changing due to radical Islam.

Walls are going up across Europe. Security glass outside the Eiffel Tower. Bollards outside the Cologne cathedral.

Complicit politicians utter inanities like “we will not be cowed”, but cow immediately in their responses: offering special dispensation to Muslim communities, condemning opponents of mass migration, shutting down free speech and criticism of Islam, and compromising on our public spaces and historical tradition of open debate.

The media classes of course help them along, covering for new legislation, ignoring the nature of fundamentalist Islam, and even demonizing moderate or liberal Muslims who wish to reform their faith from the inside out.

Such cowardice would not, and should not, be afforded to white supremacist terrorism. But the threat as it is presented is distinctly disproportionate to the reality of these groups.

“Tell it to Heather Heyer,” the critics would no doubt, brashly, retort.

Unlike them, I have no interest in minimising anyone’s death or murder. It is liberals who turn a blind eye to that, routinely.

From black-on-black crime to America’s abortion epidemic, it is a basic fact that to the left, some lives matter more than others — the ones that have political or partisan motives attached to them.

No such column inches or front page splashes were afforded to the images of Javier Martinez — I bet you didn’t even know his name — the three-year-old who was killed in Barcelona’s terror attack. They did, however, roll out images of his father hugging an imam in “a show of unity”, as the BBC put it.

The ‘i’ news website, which splashed Kurdi across its front page attempted to excuse itself on this matter recently. In my estimation, they prove my point.

“It was incredibly powerful because there was a momentum,” said Prof Charlie Beckett of the Kurdi image.

Beckett is a media professor at the London School of Economics. And apparently quite forgetful.

When the Sun newspaper splashed the faces of young victims of the Manchester attacks on its front page, Beckett described it as “splenetic”.

He added: “…of course, we do feel killing children is worse than adults, but we should be cautious about assigning a scale of value to life”.

Just a few months before, he was effectively arguing the opposite. The same article stated:

The image of Aylan Kurdi struck a chord, despite the fact there had been numerous images of refugees who had died. It was recognisable as a child, dressed in western clothing and people felt a connection.

Indeed the media does assign scale of value to life — as we know it did when attempting to minimise the horrors of Britain’s Pakistani rape and grooming gangs and the thousands of young, white girls they targeted.

Did you ever hear about the Christian convert from Islam who was beaten and forced to flee his home multiple times?

Were there any apologies when leftists alleged the murder of Ahmadi Muslim Asad Shah was an “Islamophobic” attack, when in reality the culprit was a Sunni Muslim who was subsequently openly lauded by his coreligionists.

So what’s my point?

As I write in this book, Europe’s problems often migrate to America. Indeed the scourge of radical Islam is already on your shores, the impact of which has already blighted the lives of your citizens.

I’m not suggesting we don’t fight the fringe groups attempting to rename highways, or national holidays. It is deeply important they regress no further with their culturcide.

But at a time when America should be concerning itself with the real fascism of the 21st century — Islamic terrorism — it is being led to believe there are tens of millions of racists, armed to the teeth, who have been waiting for a Republican president so they could begin the fourth Reich. It’s nonsense.

Unless the Trump administration grasps the threat of radical Islam quickly, and casts aside those who deny such problems, then a future Democrat president — be it in four or eight years — will have the freedom to turn the United States into Europe.

Raheem Kassam is the Editor in Chief of Breitbart London and author of Amazon bestseller ‘No Go Zones: How Shariah Law is Coming to a Neighborhood Near You’