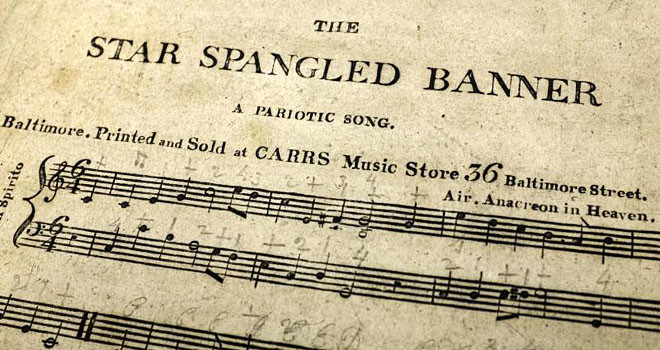 The current Neo-Puritanical mania for tearing down statues and stifling free speech by cultural ingénues ignorant of history and logic, has reached a stellar absurdity in demands to censure “The Star Spangled Banner” on lame claims that it is racist and advertises bigotry. Given the low level of contemporary culture, and the remarkable fact that sports figures who are paid millions of dollars think that their sudden wealth has made them intelligent, it is no surprise that large segments of the populace take seriously what many of these sanctimonious athletes say about complex historical matters. If ignorance is bliss, these fellows already are in Nirvana.

It has been alleged by those for whom shabby facts deface pristine theory that our National Anthem was the work of a bigot and canonized as our official anthem at the instigation of modern racists. To revise the revisionists, it helps to take a little walk into reality. In 1814, Francis Scott Key penned the words which were later set to the English song, “To Anacreon in Heaven”—a tune that is a challenge to singers, as even Renée Fleming confessed after performing it at the 2014 Super Bowl. It is often mutilated by rock stars calling attention to themselves by “interpreting” it. Personally, since I am not a canary, I prefer other tunes.

“Le Marsellaise” is incomparable for stirring even the most lethargic citizen, although its image of flooding fields with impure blood was not meant as a limp metaphor. “God Save the Queen” is so sturdy that Americans have wantonly purloined the melody, and its lines about scattering the Queen’s enemies, confounding their politics and frustrating their knavish tricks, are not for the faint of heart in the European Union. But they seem to have been a potent tonic for a nonagenarian monarch. By comparison, bombs bursting in air are pretty mild. Key wrote the words after watching 19 British ships fire more than 1,500 cannonballs, mortar shells and rockets on Baltimore. Key was indeed a slave-owner, but he had a conscience as well as a brain and when it was quickened he ordered the manumission of his slaves, and in 1820 he embarked on a seven-year effort pleading before the Supreme Court for the liberation of 300 African slaves captured off the ship “Antelope” along the Florida coast. He also worked with John Quincy Adams in the “Amistad” case to free 53 slaves.

Key’s poem “The Defence of Fort McHenry”—which, re-named “The Star-Spangled Banner,” became the national anthem in 1931—was based on verses he composed in 1805 to celebrate the victory over the Muslim slave-trading pirates on the Barbary coast (“the shores of Tripoli”). “And pale beam’d the Crescent, its splendor obscured / By the light of the Star-Spangled flag of our nation…. And the turban’d heads bow’d to its terrible glare…” John Langdon was a Founding Father who, as the first President pro tempore of the Senate, administered the vice-presidential oath of office to John Adams, and as governor of New Hampshire set aside a day in thanksgiving in 1805 “for the termination of our contest with one of the African powers; the liberation of our fellow-citizens from bondage…” One neglected but controverted stanza of the anthem is probably mistaken as a reference to typical slavery when it most likely addressed impressment of seaman by the British navy. Here, “slave” has nothing to do with race, but means simply oppression, as in “Rule Britannia” declaring that “Britons never shall be slaves.” Those words of John Thomson, by the way, were set to their great melody by the Catholic composer and hymnographer, Thomas Arne.

Islam, which means “submission,” has never had abolitionists like the Christians Bartolomé de las Casas, Benedict XIV, William Wilberforce, and Daniel O’Connell. Muhammed was a slave owner and trader, and the Quran devotes five times as much space to regulating labor slavery and sex slavery as it does to prayer. Recent revisionist attempts to portray Muhammed as a liberator of slaves falls apart in face of the fact that he is recorded as only doing this as an exchange of two black slaves for one Arab. He often enslaved freemen captured in battle and did not spare women and children. The Quran (4:24; 33:52) records a divine mandate from Allah permitting believers an unlimited number of sex slaves. Muhammed himself gave women to his three eventual successors: the caliphs Umar, Uthman, and Ali. As Muhammed is considered the perfect man, none of his actions were faulty, and slavery itself, therefore, even when modified or abolished by civil code, can never be intrinsically wrong, or subject to doctrinal development as offensive to natural law which does not exist in Islam.

Over fourteen centuries, roughly 200 million slaves, white and black, were sold by Muslim traders, and almost all the Africans sold to European traders for export to America were enslaved by Muslims. Muslim slavers sought markets during their European invasions, and even raided west County Cork in Ireland, capturing 107 Irish and English villagers from a place called, coincidentally, Baltimore on June 20, 1631 and consigning them to perpetual slavery in North Africa. So many Eastern Europeans were enslaved that the word “slave” itself comes from “Slav.” While lip service is given to abolition in Islamic lands, slavery today in the forms of bondage, forced labor, human trafficking and servile marriage, is blatant in Sudan, Niger, Gambia Benin, the Ivory Coast and Senegal. A quarter of the 3.8 million Mauritanians, a Suffi Islam state, are slaves. Slavery was not abolished at least nominally in Saudi Arabia and Yemen until 1962 under Western pressure principally from Britain. Actual slavery is common in Hinduism as well, and India has the most slaves among nations: some 18 million, more than the population of the Netherlands.

Where is the indignation of protestors here? Indignation is selective. One young Muslim woman, an American citizen, featured in the media, joined the protest against the National Anthem because of its “bigotry.” It recalled an objection to the Australian national anthem registered in 2015 by an “Islamic spokesman,” Mr. Unthman Badar: “Requiring schoolchildren to sing the national anthem, and the citizenship pledge supporting democratic values, are a part of an oppressive campaign by Australian authorities of ‘forced assimilation’ of the Muslim community.”

Revisionists who burlesque the past and mute the voice of reason fail to recognize that the value of life is secured best by the standard of the Cross and not the Crescent.