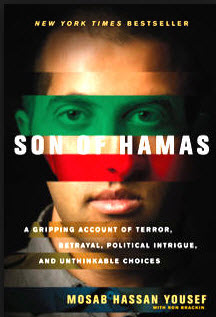 “There is a huge difference between Israeli and Palestinian leaders,” says Mosab Hassan Yousef, the video of whose speech at the UNHRC went viral, in an interview with Dr. Manfred Gerstenfeld.

“Hamas, which I know well, is an ideological political organization that views extreme violence as a means to achieve its political ends. In the 21st century an individual or group that tries to achieve its goals by violent means should not be legitimized by anybody. In my definition, Hamas is a terror organization.

“I have seen how radically different the behavior of democratic Israel is from that of Hamas and Fatah. Hamas is still living in the 7th century, something Europe cannot even understand. Over the years I have realized that due to their religious views, Hamas cannot make peace with Israel. Their interpretation of Islam requires that cease fires alone are possible with infidels, not peace. Such a cease fire can last no more than 15 years. No political solution will ever satisfy Hamas in the long term. It is not about borders but who believes in their God and who does not. Hamas’ target is not just Israel, but for Islam to gain control over all non-believers.”

Mosab Hassan Yousef was born in 1978 in Ramallah, son of Sheikh Hassan Yousef, a founder of Hamas. After involvement in anti-Israeli activities he was arrested by the Israeli Shin Bet security service. When he was imprisoned he initially decided to become a double agent. After  he saw the huge difference in behavior between Israel and Hamas he served as a key agent of the Israeli security services and continued to act in that capacity for ten years.

Yousef’s story is described in the 2010 bestseller, “Son of Hamas, A Gripping Account of Terror, Betrayal, Political Intrigue, and Unthinkable Choices” which has been translated into many languages. The movie “The Green Prince” which tells his story was released in 2014. Yousef converted to Christianity and now lives in the United States where he was granted asylum in 2010.

This interview was carried out on 27 September 2017, two days after Yousef spoke –– under the auspices of UN Watch — at the United Nations Human Rights Council in Geneva. The video of that speech received millions of  hits. In our conversation he repeated several of the statements he made at the UNHRC.

Regarding the Palestinian Authority, Yousef said that the PA was not elected by the Palestinian people. On the contrary, the PA was self-appointed and not accountable to its people. As proof of his words he pointed out the PA’s ongoing violation of human rights.

Yousef remarked: “I have often said that the Israelis care more about the Palestinians than the Fatah or Hamas leadership.” He added: “I do not believe that the violent Palestinian struggle is justified.”

In another meeting in Switzerland he pointed out that neither Hamas nor Abbas has an interest in ending the conflict since maintaining it allows their organizations to receive billions of dollars.

On the wider issue of Islam Yousef said: “I was born a Muslim, it was not my choice. Islam has an ambitious dogma which contains violence.  With that violence I totally disagree. Murder in the name of Allah is a wider Islamic problem which Western societies do not sufficiently realize. Western political correctness is conducive to Islamic terror. I do not want Islam to collapse, but to reject violence in our days. I believe that a new generation of Muslims must be educated to know love instead of hate.

“I decided to convert to Christianity, a religion which is seen negatively by Muslims. Christianity helped me to love the other. Israel and the West love life, Hamas and Fatah glorify death. That is another reason why it is so hard to negotiate. How does one find a common interest when coming from such different value systems?

“Palestinians need to start thinking about priorities. Is a political goal really their main priority? If they choose to be fooled by their leadership their fate will be continued suffering, pain and misery. The priorities can also be non-political: developing their economy, working for better education, increased individual rights, improved health and upgraded infrastructure. For that to happen the Palestinian people would have to become pro-active.

“In that case Israel and the rest of the world can help them improve their towns and villages. This would enable them to develop not only a solid economy and improved medical institutions. It would also make it possible for the Palestinian people to build bridges with the world. These seem to me to be much better priorities than following fancy political goals imposed by corrupt politicians who do not care about their people’s fate.”

When asked whether he will form a movement Yousef laughed and said: “I am not thinking of starting a movement nor do I belong to any organization. I am an individual who does not represent anyone. I thus speak on my own authority which is based on my own experience.

“And if you ask what my main forum is: mainly my dreams. The entire existence of a human being is but an individual dream.”