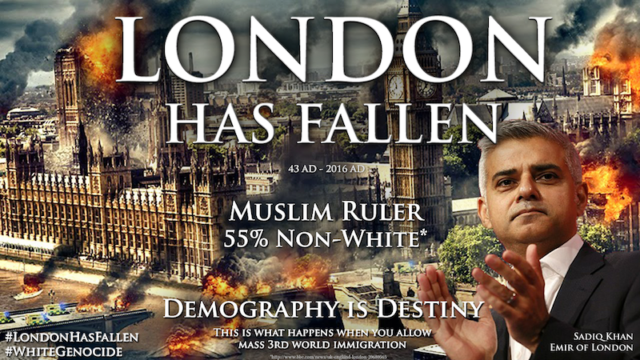 Last June, the Islamic State published a poster depicting an SUV driving over a heap of skulls and bearing the legend “Run Over Them Without Mercy.”

And the Islamic State issued this call in September 2014:

So O muwahhid, do not let this battle pass you by wherever you may be. You must strike the soldiers, patrons, and troops of the tawaghit. Strike their police, security, and intelligence members, as well as their treacherous agents. Destroy their beds. Embitter their lives for them and busy them with themselves. If you can kill a disbelieving American or European — especially the spiteful and filthy French — or an Australian, or a Canadian, or any other disbeliever from the disbelievers waging war, including the citizens of the countries that entered into a coalition against the Islamic State, then rely upon Allah, and kill him in any manner or way however it may be….If you are not able to find an IED or a bullet, then single out the disbelieving American, Frenchman, or any of their allies. Smash his head with a rock, or slaughter him with a knife, or run him over with your car, or throw him down from a high place, or choke him, or poison him….

Several people have been injured after a car reportedly drove into people outside London’s Natural History Museum.

Scotland Yard said a number of pedestrians had been injured in the incident in Exhibition Road in South Kensington shortly after 2.20pm on Saturday.

A spokesperson said: “It is not being treated as a terrorist incident at this stage while we establish what has happened.”

Pictures and footage shared on social media showed street damage and a large police presence in the capital’s museum district, which is home to the NHM, the Science Museum and the Victoria and Albert Museum.

One video showed a man being restrained on the ground in the middle of Exhibition Road. None of the four people around him were in police uniform. A black Toyota car is behind them with the driver’s door open, and it appears to have collided with a silver Vauxhall saloon.

Police have described the incident in the South Kensington area of London as a collision and said the motive for the incident was under investigation.

A Metropolitan police spokesman said: “Officers are on scene, and the London ambulance service have been called. A man has been arrested at the scene.”…