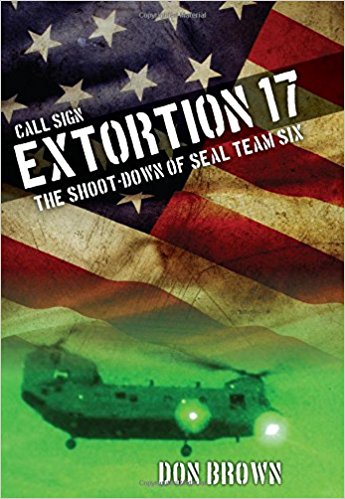 I hope this finds you well.

On October 8, the Pilot ran an article about Ed Darack’s newly-released book on the Extortion 17 shoot-down. While I appreciate the Virginian-Pilot for calling public attention to this tragic episode in the history of the U.S. military, in this particular article, the reporter chose to open by citing my 2015 book on the topic (CALL SIGN EXTORTION 17: The Shoot-Down of Seal Team Six, published by Lyons Press), apparently in an attempt to compare-and-contrast, to suggest that one book (Mr. Darack’s) is more credible than the other.

The Pilot article was written by correspondent Raymond Leach, whose words make me wonder if he even read my book. To be clear, in his brief critique of my work, bantering phrases such as the “incendiary in the world of conspiracy theorists” his commentary is misplaced, is not based upon the evidence as found in the detailed military investigation, and frankly is the product of less-than-laborious journalism.

Here’s the link to the Pilot article, for your convenience. https://pilotonline.com/a-sober-study-of-the-shootdown-of-extortion/article_79d335e3-4753-587c-a0a3-ba07a029e8ff.html

You may wish to note below Mr. Leach’s article comments  in response by Captain Joni Marquez, USAF, the firing officer aboard an Air Force AC-130 that night who came out publicly after my book was released, and corroborated one of the main points that I wrote of in 2015, that the AC-130 saw armed Taliban moving towards the chopper’s landing zone, that the AC-130 repeatedly requested permission to fire on these hostile forces, and that permission to fire was repeatedly denied. This raises a question that needs to be answered. Tell Captain Marquez that this is an “incendiary in the world of conspiracy”  theories. She was there. Mr. Darack was not. Less-than-laborious journalism is easy to write, though, and does not require as much digging.

I have taken the liberty of penning a response, attached hereto, and I hope that you will consider printing it, as the subject matter is newsworthy and important. On a personal note, I’ve always been a fan of the Pilot, and grew up reading it as a boy in Plymouth, North Carolina.

RESPONSE SENT TO THE AUTHOR OF THE ARTICLE REFERENCED ABOVE  (at the  Virginian-Pilot ), FROM DON BROWN:

I am the author of “CALL SIGN EXTORTION 17: The Shoot-down of SEAL Team VI,” the book mentioned in your article about Ed Darack’s new work entitled “The FINAL FLIGHT OF EXTORTION 17.” I have no comment upon Mr. Darack’s book, as I haven’t read it. But as the author of 13 books, mostly with major publishers, I understand the hard work and research that goes into getting a book published. Thus, regardless of whether I ultimately agree with Mr. Darack’s conclusions, I congratulate him on his book’s release, which is quite an accomplishment.

But while I have no comments on Mr. Darack’s work, I do have comments about your use of my book as a point-of-contrast in comparison. Aside from the fact that I wonder if you even bothered to read CALL SIGN EXTORTION 17, as I carefully avoided any theories of political motivation from start to finish, which you incorrectly ascribe to the book by claiming that it is somehow “political.” While you won’t find political theories in my book, you will find questions about competence and judgment up the military chain-of-command, but nothing about politics. And while there are, as you have pointed out, a number of “incendiary conspiracy theories” floating in the public domain about Extortion 17, my book does not push any of them. Not one.

Instead, my book follows a two-fold formula: First, to lay out facts where they are uncontroverted, usually laid out in the official investigative report which was strangely declassified within 8 weeks of the shootdown, after the official public report released by CENTCOM whitewashed most of these facts, and second, to simply ask a series of questions which remain unanswered, answers not only owed to the families who lost loved ones aboard Extortion 17 but, more importantly, to a nation that deserves answers as to why this mission was carried out in the manner that it was carried out.

Questions such as these:

Nelson Mandela once said that, “A critical, independent and investigative press is the lifeblood of any democracy.” Justice William Brennan, in writing the great landmark decision in the case of New York Times v. Sullivan, said, “Debate on public issues should be uninhibited, robust, and wide-open, and that it may well include vehement, caustic, and sometimes unpleasantly sharp attacks on government and public officials.”

I grew up in Northeastern North Carolina, and read the Pilot on a regular basis, both as a boy and well into my late teen years, before going off to college. There was a time when your great paper, like so many other papers, was not afraid to ask questions and demand answers. But now, in this sad age of pervasive shock-jock journalism where revenue generated by website clicks takes a backseat to evenhanded, investigative journalism, it becomes easier to embrace intellectual laziness by dismissing calls for answers to legitimate questions as “conspiracy theories” than it is to actually face evidence and ask questions about that evidence.

Why are you so afraid of the answers I’ve called for that you won’t even acknowledge the questions? Start with this. “Why were armed Taliban allowed to move toward the Extortion 17 landing zone, when an American AC130 could have easily eliminated them?” “Why did the military pathologist throw away bullets found in the bodies of American servicemen?” You want other questions? Read my book.

Here’s something you could do. Call for a legitimate congressional investigation to demand answers to these questions.

Remember your roots, and do your job.