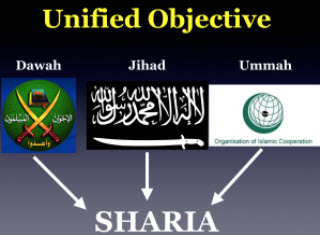 As the cadre of Sharia-compliant political candidates grows across America per Janet Levy’s recent article, Muslim Brotherhood Political Infiltration on Steroids, and Clare Lopez’s warning regarding the threat of political Islam, there is an increasing need for voters to question candidates on their positions regarding Sharia. Michigan is a case in point, as the Levy article explains:

Self-described devout Muslim and son of Egyptian immigrant parents, Abdul El-Sayed, has substantial connections to the Muslim Brotherhood and is running for Governor of Michigan. A medical doctor who served as the Executive Director of the Detroit Health Department at age 30, his background includes serving as vice president of his MSA chapter at the University of Michigan during his college years. His wife, Sarah Jukaku, who is described as “a mental health doctor,” wears a hijab. His father-in-law is a former president and current board member of CAIR Michigan.

Michigan candidates were asked to complete a survey.  A key request on it was:  Name examples of Shariah compatibility/incompatibility with the U.S. Constitution.

They have a few brave souls that answered that question in writing.  Here are the responses received so far:

No!  Our U.S. Constitution was derived in part from our Declaration of Independence which states that we are ALL created equal.  Under Shariah, there are 3 classes of citizens – male Muslims, female Muslims, and Kafir.

Article VI of the U.S. Constitution states that the Constitution is the Supreme Law of the land.  Shariah Law operates as an independent legal authority.

The First Amendment of the Constitution states that we all have Freedom of Religion and Freedom of Speech.  Shariah Law punishes those who choose to leave Islam or insult Mohammed.

No!  Shariah is totally incompatible with the U.S. Constitution.

Democrat candidate Mr. Abdul El-Sayed unquestionably has a position on Sharia, but has NOT responded to the survey request. 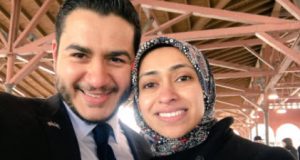 Two MI GOP candidates that have NOT responded, Mr. Bill Schuette (running for MI Governor) and Mr. Tom Leonard (running for MI Attorney General).  Both have been in political office for years; certainly, they have developed a position on Sharia -what is it?

Ms. Fayrouz Saad (running for U.S. Congress, 11th District) was the former Chair on Emgage-USA MI, an organization promoting the political careers of “engaged Muslims”. Voters need to know her position on Sharia for Muslim and non-Muslim women in the 11th Congressional District? 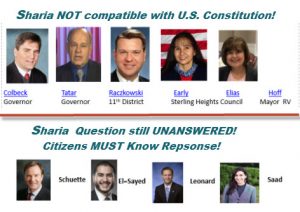 No matter where you live, you can use the questionnaire and/or your video camera to test the bravery of those who seek your vote.