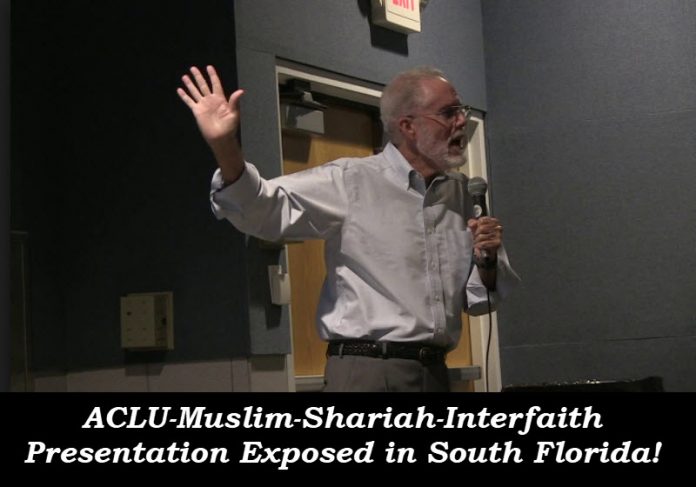 The ACLU chapter president in Palm Beach, Florida recently gave a deceptive presentation entitled “Sharia Law: Nothing to Fear”.  Mark Schneider, a nonlawyer, attempted to put a happy face on this alien and malignant doctrine, plowing straight ahead without realizing just how bad he looked doing it.

Early on, he said not to worry about sharia law because, while stoning for adultery, chopping off hands for thievery, and other barbaric punishments are on the law books in some Muslim countries, they are infrequently used.  However, stoning for adultery is found in multiple hadiths, an authoritative source of sharia law.  The hadiths also allow execution for blasphemy.  Chopping off a thief’s hands is specified in Quranic verse 5:38.  Schneider admitted during the presentation that barbaric punishments are to be found in the Quran.  You have to blinker Islam’s holy book and other expressly stated Islamic doctrines to believe that such barbaric punishments would never be imposed if America were to fall under sharia law.  Schneider’s argument is downright strange:  Don’t worry about sharia law because it’s not enforced in some countries as much as it is in others.  Huh?

Schneider acknowledged the gender bias in sharia law.  It’s heavily stacked in favor of men.  Men can get a divorce simply by saying ‘I divorce you’ but women don’t have the same privilege.  Four male witnesses are required to prove a case of rape.  Good luck with that, ladies.  But don’t worry because… because there’s nothing to worry about.  Feel better now?

Schneider pooh-poohed the idea that sharia law is encroaching on U.S. courts. One case he cited was of a Muslim man in New Jersey who got off for beating his wife because his belief in sharia law – which permits wife-beating – meant that he did not have the requisite intent to commit assault under New Jersey law.  But don’t worry, Schneider said, because the case was later reversed on appeal.  Hey, Schneider, maybe you should leave that one out next time.

Schneider then claimed the real threat is ‘dominionism’, a Christian belief that the U.S. Constitution should be replaced with Biblical law.  Why do progressives always try to change the subject?  Just because dominionism might be a threat doesn’t mean that sharia is not a threat.  Besides, how many dominionists have flown planes into buildings lately, hmm?

But it was during the Q&A that Schneider was at his most evasive and the weaknesses in his thesis most apparent. There followed an appalling string of evasions, dodges, and non sequiturs:

Q:  Doesn’t the Quran say to kill the infidel?
A: Yes, but that only means Shia Muslims.

That would be news to the 270 million Africans, Christians, Hindus, Buddhists and Jews killed by Islam over the centuries. Moreover, the Shia-Sunni split occurred 50 years after the Quran was written.  Therefore, the Quran, in instructing Muslims to kill infidels, could not possibly be referring to Shia Muslims.  But, Schneider said, “you don’t have anything to worry about.”  Then, in what would become Schneider’s standard M.O.:

Q:  Don’t most ‘moderate’ Muslims, including those in the U.S., want to live under Sharia law?
A:  It’s just flat wrong to claim that, even though most polls show that to be the case. Next question.

Q:  Isn’t the goal of an Islamic state to make the will of Allah the basis of all human affairs?
A: There’s nothing to fear, because they are not a majority in the U.S. Next question.

Oh, what fun we’ll have when they become a majority. Can’t wait.

Q:  If Muslims at 3 percent of the U.S. population are not a problem, at what percentage will they become a problem?
A:  Most Muslims have no idea what sharia law is.  Next question.

Q:  What about jihad?
A: Jihad is a complex topic you are making simplistic.  Jihad is open to interpretation. Next question.

Ah yes, the standard ‘jihad is just a spiritual struggle’ dodge.  Wondered when that was going to pop up.

Q:  Don’t terrorists always say they are waging jihad to follow Allah and establish an Islamic caliphate?
A: That’s not real sharia, any more than Christians who believe racial segregation is commanded by the Bible. Next question.

Nice try, but you changed the subject again and dodged the question of whether terrorists are following Islamic doctrine (which they are).

Q:  What about the attack on the cartoonists in Garland, Texas for depicting Muhammad?
A:  Prohibiting images of Muhammad is not sharia law. Next question.

Actually, depicting Muhammad is forbidden by the hadith, an authoritative source of Islamic law.  Besides, after the worldwide riots and ‘Days of Rage’ over images of Muhammad, the protestations that this is not ‘real Islam’ are wearing a little thin.

Q: You said Keith Ellison is a good Muslim.  What about the fact that he belonged to the violent, Jew-hating Nation of Islam and was affiliated with CAIR, an unindicted co-conspirator in the Holy Land Foundation terrorism financing trial?
A:  I lived next to the Nation of Islam for a number of years in Chicago.  I have no problem with those folks.  Ellison’s past affiliations don’t affect his viability as a candidate today. Next question.

Q:  What about Islam trying to replace Western Civilization with sharia law?
A:  If you believe that, I have a bridge I’d like to sell you.  Next question.

Sarcasm will get you nowhere.  Denouncing the questioner damages your cause.  The word ‘caliphate’ came up several times during the presentation, but Schneider never addressed its implications.

Q:  Why is the ACLU defending sharia law?
A:  We don’t have to defend sharia law, because there’s nothing to worry about.

Finally, Schneider’s presentation failed to mention how sharia is totally incompatible with the U.S. Constitution. Sharia’s blasphemy laws would shred our First Amendment free speech rights.  Sharia’s regulation of daily life, which Schneider blithely mentioned, is completely contrary to the American idea of limited government.  The government that tells you how to go to the bathroom, governs best?  Hardly.  Implementing sharia law in America would mean significant loss of freedom.  Indeed, the word ‘Islam’ itself means ‘submission’.   If that alone isn’t enough to cause fear in every American who loves their freedom, it should.  But Schneider dodged all of this by leaving it out of his presentation.

Schneider, you’ve damaged your cause. You should be fired for incompetence.  Why don’t you stay home?  But, if you just can’t contain yourself, don’t use your right hand the next time you serve up a steaming pile of crap.