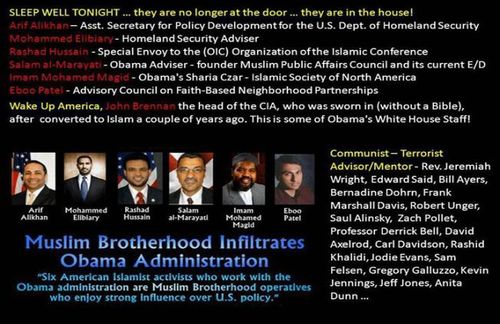 In 2008, during the largest terrorism funding trial in U.S. history, United States v. Holy Land Foundation, a document published in 1991 outlined Muslim plans to take over America.  An Explanatory Memorandum:  On the General Strategic Goal for the Group, seized in a 2004 FBI raid of the Virginia home of a Muslim Brotherhood operative, was presented during the trial as evidence of “a Civilization-Jihadist Process.” It outlined the Muslim Brotherhood goal to conduct a “grand jihad in eliminating and destroying Western civilization from within and ‘sabotaging’ its miserable house by their hands and the hands of the believers so that it is eliminated.”

For several decades, this well-organized and well-funded effort to subvert our constitutional republic and replace it with an Islamic government under Islamic law has focused on infiltrating all levels and branches of the U.S. government. More recently, the Muslim Brotherhood presence within the American political landscape has intensified, accelerated, and become more visible with the establishment of several nonprofit political action organizations. The Muslim Brotherhood stated goal of transforming American society from within in preparation for an eventual takeover is clearly moving forward fueled by the efforts of these groups and their burgeoning success within the umma or Muslim community.

As early as 1987, a declassified FBI confidential informant document described the Muslim Brotherhood as “political action front groups with no traceable ties to Muslim groups” that are organizing external political support to influence both public opinion in America and the U.S. government and its leadership. The informant who disclosed this information told authorities that the MB acknowledged the need to “peacefully get inside the United States Government” for the purpose of meeting “the ultimate goal of overthrowing all non-Islamic governments.”

In 2010, one such “peaceful” group, Project Mobilize, was created by M. Yasser Tabbara to empower and engage the political potential of the Muslim community.  Its mission statement called for the exploitation of the growing political capital of the umma, the promotion of issues important to Muslim Americans and the development of strategies for political advocacy on their behalf.  In 2011, Project Mobilize began fielding its first Muslim candidates for political office.

Project Mobilize’s founder, Tabbara, is a former executive director the Chicago chapter of the Council on American Islamic Relations (CAIR), a Muslim Brotherhood affiliate and unindicted co-conspirator in the Holy Land Foundation Hamas funding trial. Other board members include Safaa Zarzour, the secretary general of another unindicted co-conspirator and Muslim Brotherhood front, the Islamic Society of North America (ISNA), and Oussama Jammal, vice president of the Mosque Foundation, a known center for terrorism fundraising and haven for Hamas operatives.

In 2014, at the National Press Club in Washington, D.C., representatives from eight Muslim Brotherhood-affiliated groups announced formation of the United States Council of Muslim Organizations (USCMO), a political party for Muslims and the first religion-based political party in U.S. history. At the meeting, the founders disclosed their plans to expand Muslim participation in the American political process by encouraging more Muslims to vote, work on political campaigns and run for office themselves.

Oussama Jammal, who was involved in fundraising for convicted terrorist Sami al-Arian and serves as director of the Muslim Brotherhood-affiliate, the Muslim American Society (MAS), headed the new organization. MAS, created in the early 1990s, was itself begun as the U.S. branch of the Muslim Brotherhood and was designated a terrorist group by the United Arab Emirates. Mazen Mokhtar, another USCMO founding member, also had MAS ties, having served as its executive director. An Egyptian-born imam, Mokhtar served as webmaster for a site that solicited funds for Taliban and Chechen jihadists. In 2007, he was indicted by then-New Jersey Attorney General Chris Christie for tax evasion and filing false tax returns.

In 2015, a new organization, Jetpac Inc. (Justice, Education and Technology Policy Advocacy Center) was begun by Nadeem Mazen, Massachusett’s first Muslim city council member. Jetpac was established as an “open call for American Muslims to immerse themselves in local politics.” The group trains American Muslim community leaders and educates them about the political process. According to their website, they have prepared more than 15 aspiring candidates for office in Maine, New York, Rhode Island, and California. The group’s activities include development of proprietary software for social media outreach, fundraising and canvassing techniques, media communication and campaign strategy skills as well as advice on combatting negative impressions of Muslims. In addition, Jetpac teaches a course on U.S. government and politics at a Massachusetts Islamic school that focuses on grassroots organizing and the history of the civil rights movement.

Another political race worth watching involves a CAIR official running for the Des Moines, Iowa, city council. Somali Muslim refugee and president of CAIR Iowa, Abshir Omar, is running as a Democratic Socialist to represent downtown Des Moines and the city’s southwest side. City council members can wield significant power and influence over all aspects of community life. Typically, they make key appointments such as city managers, police and fire department heads, library board members, parks and recreation supervisors, transportation directors, as well as administrators for arts councils, housing authorities and planning commissions.

Meanwhile, the background of Tahirah Amatul-Wadud, another Islamist operative who intends to run for governor of Massachusetts in the future, should cause grave concern. Wadud, who served on the Massachusetts Commission on the Status of Women, has extensive radical Islamic ties. She served as an executive board member for CAIR Massachusetts and as the general counsel for Jamaat ul-Fuqra a.k.a. Muslims of America, a group alleged to have close ties to Al Qaeda.

Jamaat ul-Fuqra was founded in 1980 by Pakistani Sheikh Gilani, who was associated with shoe bomber Richard Reid and implicated in the murder of Wall Street Journal reporter Danny Pearl. According to the Clarion Project, Wadud posted an anti-Semitic article by Gilani on her Facebook that claimed Jewish complicity in the 9/11 and Pearl Harbor attacks.

Jamaat ul-Fuqra has done more than simply issue social media propaganda, however. The terrorist entity has approximately two dozen paramilitary training centers across the U.S. and its members participated in the 1993 World Trade Center bombing. It is known to proselytize and recruit black prison inmates and reportedly seeks “to purify Islam through violence.” The Center for Policing Terrorism maintains that Jamaat ul-Fuqra “may be the best positioned group to launch an attack on the United States, or, more likely, help al-Qaeda to do so.”

Another Muslim with terrorist ties is a political candidate in Arizona. Southern Baptist convert to Islam, Deedra Abboud, a Phoenix attorney and community activist who served as the executive director of CAIR Arizona and is currently associated with the Muslim American Society, is seeking the Democratic nomination for U.S. senator in her state. Abboud opposes President Trump’s policy to temporarily ban refugees from designated Muslim countries rife with terrorist activity. She also opposed the U.S. cruise missile bombing that followed Bashar Assad’s use of chemical weapons on Syrian civilians. Identifying as a feminist, Abboud defends her husband’s right under Islam to have four wives although she admits that she wouldn’t be happy with it. She helped raise bail money for deceased Muslim terrorist, Elton Simpson, when he was convicted of lying to the FBI about his plans to engage in Islamic terrorist activities in Somalia. Simpson, in the first ISIS-claimed attack on U.S. soil, tried to kill participants at the Mohammed cartoon contest in Garland, Texas in 2015. In 2009, Abboud made a statement about the acceptability of police learning Arabic to better understand the Muslim community. However, she objected to the study of Arabic as a law enforcement tool for investigating potential Islamic terrorist activity deeming it targeting.

Self-described devout Muslim and son of Egyptian immigrant parents, Abdul El-Sayed, has substantial connections to the Muslim Brotherhood and is running for governor of Michigan. A medical doctor who served as the executive director of the Detroit Health Department at age 30, his background includes serving as vice president of his MSA chapter at the University of Michigan during his college years. His wife, Sarah Jukaku, who is described as “a mental health doctor,” wears a hijab. His father-in-law is a former president and current board member of CAIR Michigan.

Quite troubling is the fact that El-Sayed is endorsed by Linda Sarsour, an advocate for the Hamas initiative for the boycott, divestment, and sanctioning of Israel and an activist who played a major role in pressuring the NYPD to discontinue its surveillance of mosques and Muslim organizations post-9/11. That surveillance effort had yielded critical intelligence about terrorist activities. Sarsour is one of El-Sayed’s biggest supporters and is reportedly helping fundraise for El-Sayed’s gubernatorial campaign. She is also a close friend of the Muslim Brotherhood-connected Huma Abedin, has family members who have been arrested for aiding and abetting Hamas, openly supports shariah law and has been a featured speaker at Muslim Brotherhood groups that were designated as unindicted co-conspirators in the Holy Land Foundation trial.

All of the above demonstrate that the Muslim Brotherhood is increasing its political clout in America. As more of its candidates are elected to office, deeper penetration of American society comes within their grasp. Their stated goal to destroy our society from within and replace the Constitution with the tenets of shariah could become a  reality. Their adeptness at appealing to the American public by using the coded language of multiculturalism and by professing a moderate Islam has proved to be an unfortunate asset. In the words of former FBI analyst and expert on the Muslim Brotherhood, John Guandolo, who has closely studied their deceptive language and appearance, Muslim Brotherhood operatives are “suit-wearing jihadis who pretend they’re friendly but they’re not.” America should be alert and aware.