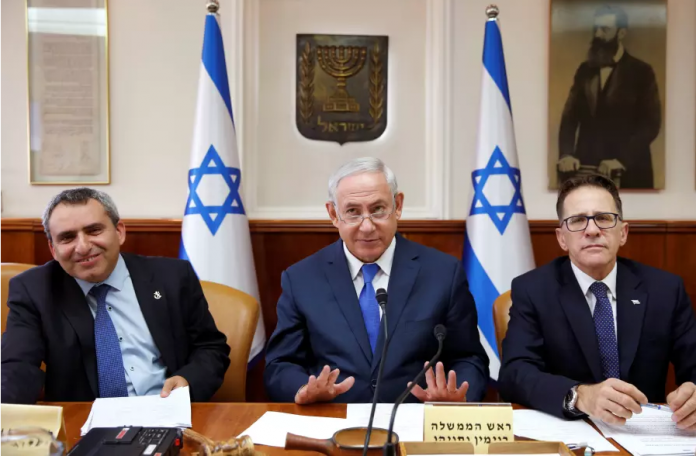 rime Minister Benjamin Netanyahu led a chorus of Israeli ministers praising US President Donald Trump’s decision last week to decertify the Iranian nuclear deal, saying on Sunday that the decision provides an opportunity to alter the agreement and to stop Iran’s increasingly aggressive behavior in the region.

“I believe that every responsible government, and anyone who wants to promote peace and security in the world, needs to take advantage of this opportunity that President Trump’s decision created to improve or cancel the agreement, and of course to stop Iranian aggression,” Netanyahu said at the start of the weekly cabinet meeting.

Netanyahu said that it was also obvious that there was a need to support Trump’s decision to place sanctions on the Iranian Revolutionary Guard, which he termed Iran’s “central arm” in spreading terrorism around the world.

Praising Trump’s decision, Netanyahu said that it was completely clear that if nothing is changed in the agreement, Iran will have a sure path to an arsenal of nuclear weapons.

The message Trump sent, Gallant told reporters before the meeting, was that “if a state strives to develop nuclear weapons and the missiles to carry them, and in parallel spreads terrorism and takes imperialistic actions in the Middle East from Yemen to Syria, then the time has come for someone to stop it.”

Communications Minister Ayoub Kara (Likud) said that the move proves unequivocally that Trump, “in contrast to the way some people are trying to present him, is the biggest friend of the people of Israel and the prime minister.”

Kara said that what Trump is doing for Israel’s future “is not a given,” and that the changes he wants to put into the agreement are not only good for Israel, but for Saudi Arabia and the entire region. Stressing that the Saudi king also praised Trump’s move, Kara said that the move is a significant step toward the possibility of convening a regional conference in the US in the near future.

Netanyahu, during his brief comments before the cabinet meeting, also referred to his directive last week to the Foreign Ministry to prepare Israel’s withdrawal from UNESCO, saying that the organization consistently gave a platform to anti-Israel and essentially antisemitic positions.

In an apparent reference to the organization’s election on Friday of former French culture minister Audrey Azoulay to lead the organization, Netanyahu said that Israel is hoping that UNESCO will change its direction, but is not placing any great hopes on that possibility. As a result, he said, his directive to leave the organization stands, and work towards implementing this policy will move forward.

Israel is expected to leave the organizations in parallel with the US, which has announced it will do so by the end of 2018.