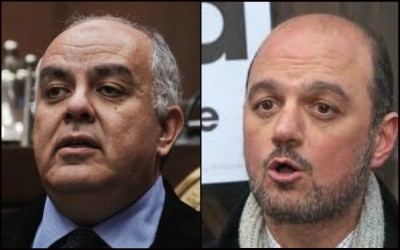 The Muslim Brotherhood [MB] “is traditionally a reformist, gradualist movement [which] is working on social change,” stated the Egyptian MB member Amr Darrag at a Georgetown University panel last month. With that, Darrag and his fellow speaker, the British-Iraqi MB operative Anas Altikriti, added to Georgetown’s longstanding history of enabling the MB’s deceitful use of liberal language to mask totalitarian goals.

Georgetown’s Saudi-funded Prince Alwaleed bin Talal Center for Muslim-Christian Understanding (ACMCU) hosted the event, which was titled: “Post-Arab Spring Middle East: Political Islam and Democracy.” A pro-Islamist bent was inevitable given that the moderator was ACMCU director Jonathan Brown. This professor has his own professional links to MB groups and is the son-in-law of convicted terrorist Sami Al Arian. In February, Brown was widely criticized after he gave a speech at a MB think tank justifying the practice of slavery within Islam.

Before the event, MB expert Eric Trager warned against Darrag’s visit to America: “The Muslim Brotherhood is an international hate group that seeks” to establish a “global Islamic state or neo-caliphate.” Speaking at the event, Altikriti, whom the Hudson Institute describes as “one of the shrewdest UK-based Brotherhood activists and the son of the leader of Iraq’s Muslim Brotherhood,” dismissed Trager’s article as “hilarious.”

Despite Altikriti’s insistence elsewhere that he has no connection to the Muslim Brotherhood, he describes the movement as “the most important democratic voice that espouses multiculturalism, human rights and basic freedoms.” He also maintains that, while indeed part of the “spectrum” of “political Islam”, groups such as Al-Qaeda and Islamic State are “abnormal phenomena” and not ideologically related to the Brotherhood. By contrast, Lebanese-American Middle East expert Walid Phares has identified the MB as the “mothership for the jihadi ideologies.”

Notwithstanding Altikriti’s support and apologetics for Hamas, an MB affiliate and the totalitarian ruler of the Gaza Strip, he expressed a desire for “far more political players and actors throughout society than political Islam.” He added that if the “only alternative to authoritarian regimes is political Islam, that’s a choice that I would loathe.”

Altikriti’s suspect celebration of pluralism echoes his previous descriptions of his own organization, the UK-based Cordoba Foundation. Altikriti has told Al Jazeera that his foundation “rehashes positive memories” of an ostensible period of multicultural coexistence in medieval Islamic Spain. Prime Minister David Cameron, however, describes the Cordoba Foundation as a “political front for the Muslim Brotherhood,” while the United Arab Emirates has designated the foundation a terrorist organization.

Darrag, meanwhile, was a former minister in Egypt’s MB-led government under Mohamed Morsi, until its 2013 overthrow. Darrag argued that under Morsi the MB wanted “to go back quickly to stability, to establish institutions, elections, get a parliament, constitution, a president, all the institutions that would be perfectly fit for an established democratic system.” He denied Islamist involvement in the “Arab Spring,” arguing that protestors “didn’t go out to ask for the application of sharia.” Trager has noted in fact that Darrag played a central role in creating under Morsi a new, sharia-focused Egyptian constitution.

Darrag also claimed that the MB rejects violence in its pursuit of political reform. He described the work of his Istanbul-based Egyptian Institute for Political and Strategic Studies (EIPSS) as the promotion of liberal, democratic issues, such as “transitional justice” and “civil-military relations.” Once again, however, Trager has noted that EIPSS “presents itself as a scholarly think tank, but it often promotes violent interpretations of Islamic texts” in Arabic-language articles — yet another example of the MB feigning nonviolence.

The Georgetown panel reflected the Hudson Institute’s previous analysis of Altikriti: his longstanding strategy is “to persuade Western governments that they should fund Brotherhood groups as moderate alternatives to al-Qaeda.” A 2015 review of the MB by the British government itself judged treating the MB as a moderate alternative to Salafi-jihadism as counterproductive and contrary to security interests.

Altikriti, who has joined with senior Hamas leaders to found the British Muslim Initiative, is certainly not a moderate. His Cordoba Foundation once co-hosted an event featuring the Al Qaeda operative Anwar Awlaki. No wonder a British bank decided, in 2014, to close the accounts of Altikriti, his family members, and the foundation.

The Georgetown hosts made no notice of their panelists’ extremist connections. Altikriti and Darrag were presented as no different to technocrats running for city council in a Western country. Yet the facts of the speakers’ ideology leave no illusions that smooth-talking, suit-wearing Islamists have any real interest in good governance and liberty under law. Critical observers should not fall for this farce

Ilhan Omar Flashes Back to Reading Islamic Prayer in a Catholic Church: Allah, ‘Sustain Me with Your Power’