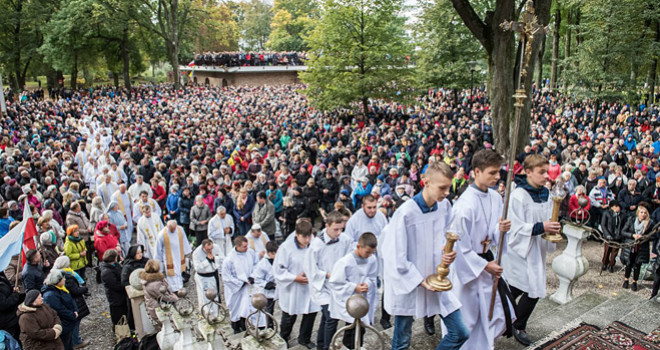 If you’ve ever seen Casablanca, you won’t have forgotten the scene in Rick’s Cafe where the German officers who are singing “Die Wacht am Rhein” are drowned out by the French patrons who burst into a rousing rendition of the “Marseillaise.”

Something similar happened last week at the National Opera in Cluj Napoca, Romania. A “multicultural” opera that included a Muslim muezzin chanting the call to prayer was interrupted by members of the audience singing the national anthem.

The Romanian national anthem is not quite as rousing as “La Marseillaise” (at least, not to the non-Romanian ear), and the singers were not as talented as the cast of Casablanca, but the sentiments were the same—namely, that tyranny must be resisted.

What tyranny is that, you may ask. Romania is not an occupied country, nor is it in imminent danger of an Islamic takeover.

But it was not that long ago that Romanians did live under the boot of a communist tyrant. Indeed, Nicolae Ceausescu, who demolished churches and employed slave labor, was one of the more ruthless of recent dictators. With the memory of his bloody regime fresh in mind, it is no wonder that Romanians are sensitive to any signs of nascent totalitarianism—even if it is only the soft totalitarianism of the European Union.

Having joined the EU in 2007, Romania is subject to the increasingly Orwellian dictats of the EU—particularly those touching on immigration. Like it or not, every EU country is expected to take in a certain quota of immigrants. As migrant crime rates soar, many are now beginning to look upon EU membership as akin to membership in a suicide pact.

This is a particularly touchy subject for Romanians because their country is the first stop on one of the main migration routes into Europe: from Turkey, across the Black Sea to Romania, then up into Hungary, Slovakia, Czech Republic, and Germany.

The half-dozen or so Romanians who sang the anthem at the Opera were likely concerned not only about the political imperialism, but also about the cultural kind. As one of the leaders of the “resistance” group put it, “We see this as a play to brainwash viewers, so people might easily accept the Islamization of Romania.”

The performance they objected to was Karl Jenkins’ The Armed Man, A Mass for Peace, an anti-war piece which includes extracts from the ordinary of the Mass, the Islamic Call to prayer, the Mahabharata, and poetry from various sources. As Ned May puts it in his Gates of Vienna column, “the Mandarins of Multiculture recently sent [from London] an ‘inclusive,’ ‘diverse’ opera to Romania to enlighten the benighted locals.”

The “locals” were particularly offended by the chanting of the Muslim call to prayer which begins with the words “Allahu akbar” (God is greater) and then continues: “I confess there is no god other than Allah. I confess that Muhammad is sent by god…” It was at this point that the small band of patriots began to sing their national anthem: “Wake up, Romania, from the sleep of death into which you have been sunk by barbaric tyrants…”

This, in turn, was met by objections from the cultured—or shall we say “multicultured”—audience: “Get out. You are cretins;” “Get out. You can do politics outside.” At this point, police arrived and did escort the group outside. But the reaction of certain members of the audience was telling. They looked upon the protesters as insensitive “cretins” with no respect for high culture.

The problem is that high culture can’t exist for long unless it’s sustained by the culture—not just attendees at a cultural event, but a community of people held together by common bonds of religion, patriotism, history and (usually) language. If high culture has no respect for the “mystic chords” (to use Lincoln’s phrase) that bind people together, it can’t expect a reverential response to its experiments in multicultural indoctrination. In a multicultural society, everyone is expected to be sensitive and non-offensive—everyone, that is, except the multiculturalists themselves. They seem to have exempted themselves from the non-offensive rule.

For example, did the composer of the opera ever wonder, or even care, that some Catholics might take offense at a choral work that takes liberties with the Mass? After all, the Mass does not start with an invocation of Allah and Muhammad. Nor is there any suggestion in the Mass that all religions are morally equivalent, as the choral piece suggests. A member of the audience shouted “you can do politics outside.” But the politics was already inside—it was inherent in the “message” of the opera.

Why was that particular opera chosen as the particular lesson that must be taught to the people of Romania at this particular time in history? Why not Mozart’s Abduction from the Seraglio—an opera that reminds us that tens of thousands of Europeans once fell victim to the Islamic slave trade?

Why? Perhaps because the London opera might prompt people to more “easily accept the Islamization of Romania.” Of course, Romania is not the only target of the multicultural putsch. Attempts to acclimatize Europeans to Islamization are taking place all over the continent. In Italy, Christmas crèches have been removed by parish priests so as not to offend Muslims. In Sweden, many towns have stopped celebrating Saint Lucy Day for the same reason. In Sweden, also, a new book for children has hit the shelves. It’s titled Grandpa Has Four Wives, and it’s meant to accustom three-to-six year old Swedish children to the idea that Muslim polygamy is okay.

The Swedes are so far advanced in the art of tolerance that they may not be able to mount any resistance to this kind of cultural takeover. But in Eastern Europe it’s a different story. Having recently thrown off the yoke of communism, East Europeans are more attuned to the signs of cultural oppression, and are less willing to go quietly into the dark night of totalitarianism.

It’s not yet clear if the “Easterners” can turn things around in Europe, but there are heartening signs. The “duel” at the Romanian opera is one hopeful sign. Another, more significant sign is the recent gathering of hundreds of thousands of Catholics along the Polish border to pray the rosary.

The “Rosary at the Borders” event brought Catholics to locations around the country’s 2,000 miles of borders, around its Baltic Coastline, and to its major airports. By some estimates as many as 1.5 million participated. The event took place on October 7, the Feast of Our Lady of the Rosary. That day was also the 446th anniversary of the decisive naval victory at Lepanto. Under the leadership of the Holy League, the Catholic fleet defeated the larger Ottoman fleet and saved Europe from an Islamic invasion. Pope Pius V who had called for Catholics to say the rosary in support of the fleet, credited the victory to Mary’s intercession, and established October 7 as the feast of Our Lady of the Rosary.

[He] understood the tremendous importance of resisting the aggressive expansion of the Turks better than any of his contemporaries appear to have. He understood that the real battle being fought was spiritual; a clash of creeds was at hand, and the stakes were the very existence of the Christian West.

The existence of the Christian West is once again at stake. Eastern Europeans understand this better than most. And as exemplified by the “Rosary at the Borders,” they understand, as did Pius V, that the conflict with Islam is a spiritual battle.

Another Eastern European who grasps what is at stake is Prime Minister Victor Orban of Hungary. Orban echoes one of the main themes in the writings of Pope Benedict XVI—namely, that Europe has Christian roots, and if it cuts itself off from those roots, it will lose not only its identity, but also its greatness and goodness.

In a number of speeches, Orban has raised the question of whether Christianity can survive in Europe if Europe keeps its borders open to the “Great Migration” from cultures that are hostile to Christianity and Judaism. He has made the case that this migration jeopardizes freedom of religion, equality between men and women, and the fight against anti-Semitism. “Our guiding idea,” he says, “is not liberalism, but sovereignty and Christian social teachings.”

Something is stirring in Eastern Europe. There are numerous signs that a resistance is building against both the soft tyranny of the EU, and the hard tyranny of Islam which is being imported by the EU elites. This spirit of resistance is slowly seeping into Western Europe where polls show that a majority of citizens now want a complete and permanent halt to Muslim migration. It’s also reflected in the fact that the PEGIDA movement (Patriotic Europeans against the Islamization of Europe), which began in Eastern Germany, has now spread to all of Western Europe. Eastern European resistance may have helped inspire Eurosceptic and anti-immigrant parties that won majorities in Austrian elections this weekend.

During the Cold War, Western Europeans supplied aid and encouragement to their brethren behind the Iron Curtain. Now it looks as though the East is returning the favor.