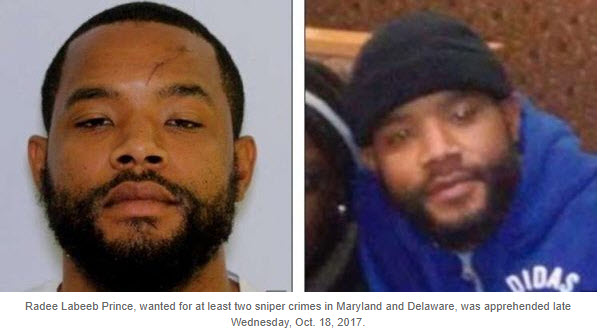 ” Remember my story from two days ago on Vegas shooter being the inspiration for more shootings per ISIS’s ‘ideas for lone wolves’? Well, here is the first attack that I can say lines right up with ISIS’s instructions. Jihad is playing out in real time, today, and our own law enforcement can’t recognize it. I’m the first to report it, but guarantee I won’t be the last.”

Police hunted 10 hours Wednesday for an armed felon identified as Radee Labeeb Prince, 38, who is suspected of shooting three people to death and leaving two more critically wounded after 9 a.m. at a business park outside Baltimore.

He is also a suspect in another shooting in Wilmington, Delaware, that took place two hours later. The Wilmington shooting happened around 11 a.m. at 28th Street Auto Sales and Service in the 2800 block of Northeast Boulevard.

Prince was being hunted for what police called a “targeted attack” on employees at the Emmorton Business Park in Edgewood, Hartford County, Maryland.

The FBI issued a statement just after 7:20 p.m. Wednesday that it had caught the accused killer in Delaware. 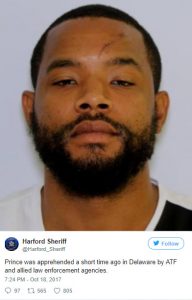 Hartford County Sheriff Jeffrey Gahler said a motive isn’t known, but that “this does appear to be a target attack limited to that business.”

But Prince didn’t stop there. He drove immediately to a second location two hours away to a Wilmington car dealership, where he shot a man in the head.

The victim in Delaware was rushed to the hospital, ABC News reports. The suspect in both this shooting and the Maryland shooting has been identified as Radee Labeeb Prince, of the 500 block of Kiamensi Road in Wilmington.

He was considered “armed and dangerous,” the FBI stated.

News about the shooting did not surface in the national media until about 12 noon, and by 3 p.m. very few were reporting the second shooting in Delaware.

“Labeeb” is one of Allah’s 99 names, according to Islamic tradition. Al-Labeeb means “the one with passion and heart” in Arabic. “Radee” means approval. The whole name Radee LaBeeb means “an approval or agreement of Allah.”

He reportedly used a single handgun to mow down five co-workers, three of them fatally, in Maryland.

Police initially called it a “workplace shooting” because Labeeb Prince is reportedly a machine operator at the Advanced Granite Solutions in Edgewood, a little over 25 miles northeast of Baltimore. He has worked there about four months, according to company owner by Barak Caba.

At a 4 p.m. press conference, Wilmington Police Chief Robert Tracy was still trying to sell the attack to the public as work place violence.

“Every one of the victims that this individual shot, the victims and the offender knew each other. So these were targeted shootings, for whatever reason,” Chief Robert Tracy told reporters.

Rather than work place violence, it’s also possible that Prince was carrying out a planned jihadist attack on multiple soft targets.

In 2003, he was convicted of 15 counts of burglary in Delaware and served time in prison.

A check of Facebook showed no account under his name an hour after news of the shooting hit the media. He either had no account or it had already been wiped clean by Facebook.

As WND reported Monday, ISIS issued a statement just last weekend calling on its “soldiers” in North America to launch sniper attacks on soft targets and to move quickly to another site and shoot more people before police could find them.

ISIS celebrated Las Vegas killer Stephen Paddock and gave the red light for smaller shootings that kill as few as one “Kuffar” or unbeliever, because they can make “several similar attacks” without getting caught, if they go about it the right way, the terror group advised, with details as follows:

“The authorities have intelligence but also with weaknesses and these weaknesses you can take advantage of them. One of these weaknesses is that you can act in a place away from surveillance cameras, even traveling from one city to another to attack anonymously, select places alone but with a concurrence of kuffar people, or abandoned houses and attack them during the night, try to put aside everything that relates you to the attack. Attack as a sniper; Select the place and plan every month before carrying out everything, keep your plan, always follow your routine, as all travel [from] a city to another, can even attack on busy roads, reach the kuffar in the car and shoot them, so that no one else will see the action.”

Authorities believe Prince to be armed and dangerous and was last seen driving a black SUV described by the FBI as a 2008 Chevy Acadia with a Delaware license plate number PC064273.

Three hours later, at 3:22 p.m., the FBI acknowledged it was the same shooter wanted in connection to both incidents. 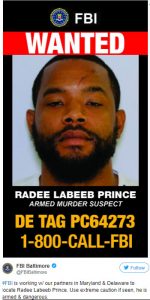 Five schools in the Edgewood area were placed on lockdown in the morning on the advice of the sheriff’s office, the county school system said on its website. The lockdown eventually was lifted, according to a message on the site updated shortly after noon.

“We will proceed with all remaining activities today, including athletic events, as planned,” the message read.

More to come on this developing story …