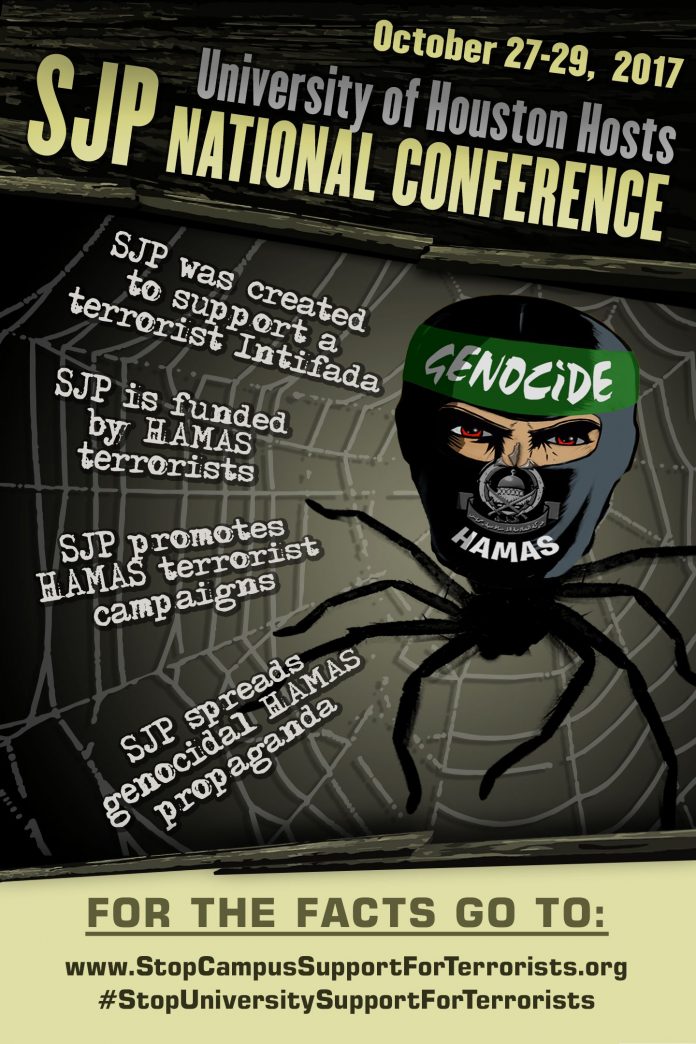 Editor’s note: As revealed in recent congressional testimony, Students for Justice in Palestine is a campus front for Hamas terrorists. SJP’s propaganda activities are orchestrated and funded by a Hamas front group, American Muslims for Palestine, whose chairman is Hatem Bazian and whose principals are former officers of the Holy Land Foundation and other Islamic “charities” previously convicted of funneling money to Hamas.

The David Horowitz Freedom Center is naming the “Top Ten Worst Schools that Support Terrorists.” The latest school to be named to this list is the University of Houston which will host the National Students for Justice in Palestine Conference on October 27-29, 2017. The report and posters are part of a larger Freedom Center campaign titled Stop University Support for Terrorists.

Images of the posters that appeared at the University of Houston and other campuses named to the list may be viewed at www.stopuniversitysupportforterrorists.org. Coinciding with the naming of the University of Houston to this list, the Freedom Center placed posters on the UH campus exposing the links between Students for Justice in Palestine and the terrorist organization Hamas, whose stated goal is the destruction of the Jewish state. Freedom Center founder David Horowitz will speak on the Houston campus on November 2nd.

The University of Houston is home to an increasing radical and Hamas-promoting chapter of Students for Justice in Palestine, as is shown by the choice of that campus to host SJP’s2017 National Conference, a restricted event that spreads hatred of the Jews and teaches Hamas propaganda techniques to SJP chapters who attend from across America. UH SJP and MSA co-hosted an event featuring Sheikh Omar Suleiman who has publicly supported a “3rd Intifada” and SJP has also hosted anti-Israel poet Remi Kanazi who promotes the Hamas-backed BDS movement against Israel. UH SJP also hosts annual “Israeli Apartheid” hate weeks featuring a mock Israeli “apartheid wall” plastered with Hamas propaganda including the genocidal slogan “From the River to the Sea, Palestine will be Free” and blood libel claiming that Israel targets Palestinian children for slaughter.

In June 2017, U. Houston SJP announced that the 2017 SJP National Conference—a highly secretive event that spreads hatred of Israel and teaches Hamas propaganda tactics to SJP members from campuses across the nation—would be hosted on their campus in the Fall. SJP National is part of the Muslim Brotherhood terrorist network and receives funding from Hamas through an intermediary Hamas front group, American Muslims for Palestine.

During an “Israel Apartheid Week 2017” that was hosted on campus in March, Students for Justice in Palestine erected a mock “Israeli Apartheid Wall” plastered with Hamas propaganda denying the legitimacy of the Jewish state. One panel of the wall contained the slogan, “From the River to the Sea, Palestine will be Free” a call for the total destruction of Israel—which lies between the Jordan River and the Mediterranean Sea. This is the same goal which Hamas endorses in its charter. Another panel of the wall contains an image of the series of Hamas propaganda maps purporting to show the Jewish colonization of Arab Palestine, a nation that has never existed. A third panel states, “If you want to find a safe place in Gaza, do not stand near a child,” implying that Israel deliberately targets Palestinian children with its weapons. In fact it is Hamas that places its rocket launchers in civilian areas and uses Palestinian children as human shields for its terrorist activities. A fourth panel accuses Israel of targeting mosques, schools, and slums in an effort to kill civilians and declares “It is not war, it is murder.”  These declarations are Hamas propaganda lies. In fact, Hamas takes pains to use civilian dwellings and areas to launch rocket fire against Israel so that when Israel retaliates, they can point to the resulting civilian casualties as evidence of Israel’s inhumanity.

An event co-hosted by Students for a Democratic Society (SDS) and SJP during Israeli Apartheid Week 2017 featured UH African-American Studies Chair and Communist Party member Dr. Gerald Horne who spoke on “The Black Radical Tradition and Palestine.” Horne endorsed the genocidal and Hamas-promoted and funded Boycott, Divestment and Sanctions (BDS) campaign against Israel, stating “Just as we enlist more black organizations into the BDS movement, boycott, divestment, and sanctions movement..it would…give a direct boost to BDS if we had the Palestinian forces and their allies internationally speak out more on police terrorism.” When a group of Zionist students attempted to speak during the question-and-answer session, and to students outside the lecture hall, pro-Palestinian students surrounded them and chanted slogans such as “free, free, Palestine, occupation is a crime!” until they were forced to leave and abandon the attempt at dialogue. An article about the event proudly declared that “Zionists were driven away.”

In March 2017, UH SJP released a statement purportedly opposing anti-Semitism which in fact demonstrated several forms of anti-Semitism including denying Jews self-determination and delegitimizing the Jewish state. The statement declared, “We are committed to building a world that values justice and equality, not oppression and apartheid. That commitment also requires us to reject the conflation of anti-Zionism with anti-Semitism: we oppose Zionism and Israel’s discriminatory policies, and we condemn anti-Semitism.”

In January 2017, UH SJP shared a video from Jewish Voice for Peace on its Facebook page on “What is Boycott, Divestment and Sanctions” that purports to show a timeline of Israel’s occupation of Palestine which includes “ethnic cleansing” of 750,000 Palestinians and “conquest, destruction and expulsion which has continued to the present day.” It also accuses Israel of a “brutal military occupation” and a system of “racial discrimination” that amounts to “apartheid.”

In March 2015, UH SJP co-hosted an event with BDS Houston featuring anti-Israel poet Remi Kanazi. During the event, Kanazi promoted the Hamas-funded BDS movement against Israel, stating “F—k Zionists, Boycott Israel,” and claimed that Israel is carrying out “ethnic cleansing” against the Palestinians.

In February 2015, UH SJP announced that they were launching a campaign to push for the passage of a BDS resolution against Israel on their campus. The BDS movement is supported financially and organizationally by Hamas.

UH SJP has shared several Facebook posts in support of convicted anti-Israel terrorist Rasmeah Odeh who was convicted by an Israeli military court in 1970 for her involvement in two fatal terrorist bombings.

In August 2014, UH SJP and MSA co-hosted an event featuring Sheikh Omar Suleiman who has publicly supported a “3rd Intifada” to destroy Israel and has spread Hamas propaganda lies and blood libels about the Jewish state.

The Canary Mission, an organization dedicated to identifying Jew hatred at colleges and universities, found that 13 individuals who are either attending or are recent graduates of the University of Houston posted dozens of times on social media expressing support and praise for Hitler, mocking the Holocaust, threatening violence against Jews, and expressing Jew hatred. Several of these individuals were members of SJP or MSA at the University of Houston, while others were loosely affiliated with these chapters.

“Yahoodis [Jews] are just so disgusting.”

“FalasteenibladnawilYahoodiklabna [Palestine is our country and the Jews are our dog].”

“Palestine will be the 2nd place of the Holocaust for the Yahood [Jews].”

“Hitler loved Arabs specifically Palestinians, he even said ‘we need to get the Jews out of Palestine they don’t belong there’”

“Yall don’t understand I wanna beat a zionist bitch up so bad.”

“A Jewish rabbi has admitted to using human child meat as a filler in McDonalds meat. They allegedly drug teens and kill them, for their meat.” Radwan then doubled down, adding: “THE TRUTH ABOUT MCDONALDS & MISSING CHILDREN.”

“Baba: Jews have a big nose because breathing air is free Lmfaoooo”

“Teacher: hitler tried to exterminate the Jewish people Me: I wish he did Kid next to me: wtf is wrong with you… .”

“I am gonna throw rocks at yahood [Jews] this summer and no one is stopping me.”

“Holy crap man ma bedi a2oolha bas Hitler lazem a5ad kel el yahood [Hitler should have killed them all] when he had the chance shuklab [that dog].”