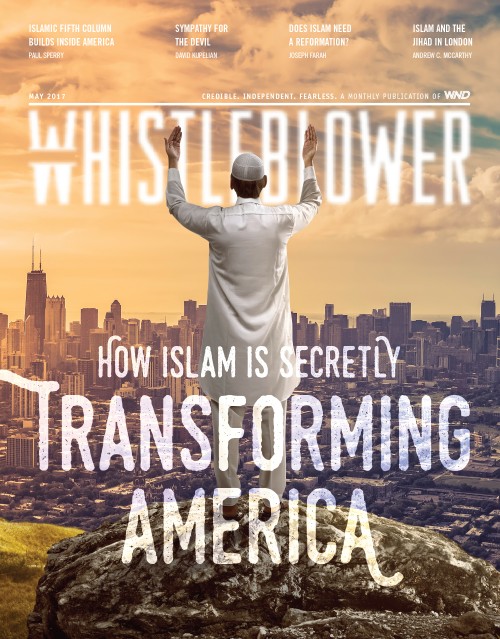 ‘Why would we continue down the same path that has led to Europe’s virtual suicide?’

It’s not that unusual for an Islamic society.

After all, the typical features are all on display – the Muslim call to prayer, the teaching of Islam in the nation’s schools to the exclusion of other religions, preferential treatment afforded Muslims by government and the courts, news coverage reflexively portraying Islam in a positive light, the rapid growth in mosque construction – and also the disturbing cultural phenomena of female genital mutilation, “honor killings” and so on.

Except this is not Saudi Arabia or Egypt we’re talking about, or any of the world’s approximately 50 Muslim-majority countries.

This is the United States of America. Not America as it might be one day if current trends continue, but as it is right now – today.

That’s right. While North Korea threatens to nuke the U.S. mainland, while the left continues its infantile post-election meltdown into madness, while President Trump endeavors to remedy the torrent of national and international problems unleashed by his predecessor Barack Obama – beneath the radar and largely out of view, America is inexorably becoming ever more Islamized.

​That is the topic of May’s sensational issue of WND’s monthly Whistleblower magazine, headlined “HOW ISLAM IS SECRETLY TRANSFORMING AMERICA.”

While a few brave souls have been sounding the alarm over the relentless inroads Shariah Islam is making into American culture, education, religion, law, government and the military, perhaps the most important question needing to be addressed up front is, why?

“Why,” asks Whistleblower Editor David Kupelian, “when Judeo-Christian America has been hands-down the most successful nation in history – indeed why, when Americans are blessed with a crystal ball called Europe in which they can clearly see the disastrous future awaiting a once-Christian civilization that recklessly embraces Islamic expansionism – would we continue down the same path that has led to Europe’s virtual suicide?”

The real reasons – and the real solutions – are found in “HOW ISLAM IS SECRETLY TRANSFORMING AMERICA.”

As Kupelian explains: “The current inversion of Americans’ traditional core values – which causes us, for example, to glorify and celebrate perversion and mental illness (like troubled people amputating healthy body parts and pretending to be the opposite gender) while reviling and punishing virtue (like the Christian county clerk jailed for objecting to signing a marriage license for two homosexuals) – is the same inversion of values that inspires us to enthusiastically import into our country large numbers of people steeped in a religious and political ideology dedicated to crushing our own. It’s as though we’re living in a hypnotic trance, in a dream state, wherein we are moving in slow motion toward certain destruction. It’s time to wake up.”