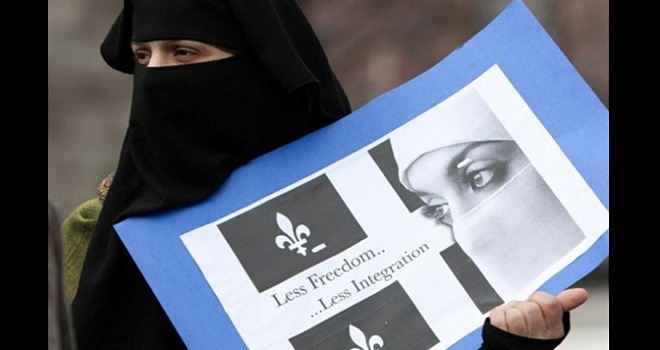 The good news is that ISIS has been defeated in Mosul and Raqqa, and may soon be driven entirely out of Iraq and Syria. The bad news is that Islamists continue to pile up victory after victory on the home front.

The home front war is basically a culture war. Islamists are winning it because they understand the nature of the war. The West is losing because its leaders have only the vaguest awareness that they are under attack. Let’s take Canada as a case in point. And let’s start with one of the rare instances of a Western victory in the culture war—Quebec’s face-cover ban.

In October, Quebec lawmakers passed a law barring public workers from wearing the niqab or burqa, and obliging women to unveil while using public transit or receiving government services. In defense of the measure, Philippe Couillard, the premier of Quebec said “We are just saying that for reasons linked to communication, identification, and safety, public services should be given and received with an open face…you speak to me, I should see your face, and you should see mine. It’s as simple as that.”

That’s sounds reasonable. Yet, it’s widely expected that the new law will be challenged in courts. It has already been challenged by Canadian prime minister Justin Trudeauwho said, “I don’t think it’s the government’s business to tell a woman what she should or shouldn’t be wearing.” (That also sounds reasonable until you consider that most governments have public decency laws which require that both men and women should be clothed when in public.)

Unfortunately, it is Trudeau’s multicultural vision of Canada that is winning the day. For every show of sanity such as the burqa ban, there are a thousand concessions to Islamist sensitivities and demands. Thus:

Meanwhile, Prime Minister Justin Trudeau, in an apparent slap at President Trump’s travel ban, issued a welcome to all the world’s refugees: “to those fleeing persecution, terror & war,” he tweeted, “Canadians will welcome you, regardless of your faith. Diversity is our strength. #Welcome to Canada.” Trudeau practices what he preaches. One sign of his commitment to Muslim migration is that he named Ahmed Hussen, the President of the Canadian Somali Congress as Minister of Immigration.

The problem is, Canada’s young prime minister has a rather naïve view of Islamic culture and religion. He really seems to believe, as he once said, that “Islam is not incompatible with free and open Western societies.” His naiveté was on full display earlier this year when he marched in the Toronto Gay Pride Parade wearing rainbow striped, crescent and star “Ramadan” socks because the parade coincided with Eid al-Fitr, the Islamic festival which marks the end of Ramadan. Here is his invocation:

It’s all about including people which is why today, on Eid al-Fitr, I’m happy to wish a pride Mubarak to everyone as well who is celebrating of the Muslim faith. It’s all about how we celebrate the multiple levels of identities that make Canada extraordinary and strong; and today we celebrate with the entire LGBT community. Happy pride everyone! Happy pride to Allah!

“Happy pride to Allah”? If Trudeau weren’t a very useful tool of Islamist expansionism, his days would be numbered. To suggest that Allah would be pleased with a gay pride celebration, betrays an almost childlike ignorance of Islam. And for someone who is concerned about Muslim sensitivities, it shows a blissful innocence about what might offend them.

Which goes to the deeper question of how to conduct the culture war with Islam. The basic strategy of Western governments is to win the hearts and minds of moderate Muslims who are presumed to be the vast majority, so that they won’t be tempted to join forces with the radicals who are presumed to be a tiny minority. It’s also presumed that the way to win over the moderates is by demonstrating that we cherish and value Islamic culture, while avoiding any word or deed that might be offensive to Muslims. Yet this deeply flawed strategy actually works to the disadvantage of moderate Muslims. At the same time, it strengthens the hand of Islamists and fundamentalists.

How so? Take the ban on the burqa and niqab. Prime Minister Trudeau opposes the ban and so does Denis Coderre, the Mayor of Montreal. Presumably, they think the ban is offensive to Muslims. Well, yes, it would be offensive to radicals and fundamentalists, but why would it be offensive to a moderate Muslim? The burqa is not required by Islamic law, and it nearly disappeared in the 1960s and 70s when much of the Muslim world was more moderate than it is today. A truly moderate Muslim who possessed all the liberal and tolerant attitudes that we attribute to moderate Muslims would welcome the ban. He would recognize that the burqa is a symbol of female subjugation.

Such a person would probably also welcome a ban on the term “Islamophobia.” He would realize that the purpose of the anti-Islamophobia campaign in the West is not to help Muslims integrate into the host culture but to make sure they never do. The campaign is not meant to heal a breach between cultures, it’s meant to create one. Its aim is to convince Muslims that whatever non-Muslims say or do, they are irredeemably anti-Muslim. The whole point of the multicultural movement (of which the anti-Islamophobia campaign is one manifestation) is not that cultures should unite, but that each should celebrate its unique identity and avoid the dilution that comes with assimilation to a common culture.

Thus, multiculturalism only exacerbates a tendency that is already quite strong in Islam—namely, the belief that it is a superior culture and a superior religion to which other cultures and religions ought to submit. The special treatment that is given to Islam in Canada, the UK, Europe and America only feeds into this attitude of entitlement. Indeed, many Muslims living in Europe consider the generous welfare benefits they receive to be nothing more than the payment of the jizya tax which is their due.

The wearing of the hijab and the burqa, the self-segregation into Muslim-only ghettos, and the appeasement of the elites serve to increase the power of non-integrationist, fundamentalist Muslims, and to diminish the strength of the moderates. I’m talking, of course, about genuine moderates, not the stealth jihadists who pretend to be moderates while transforming their communities into little Meccas. In this environment the genuine moderate is on his own. He can’t look for support from his fellow Muslims and he won’t get any from the larger society.

Moreover, many of the Muslims whom we consider moderate are not really moderates in the Western sense of the term. They seem to be moderate because they are often indifferent to Islam. Their lukewarmness prevents them from embracing the more extreme manifestations of their faith, and it leaves them more open to other alternatives. But their shallow commitment to Islam doesn’t necessarily translate into a strong commitment to other beliefs.

In short, they should be thought of as fence-sitters rather than moderates. They are waiting to see which way the wind is blowing. When they look to the East and witness the defeat of ISIS, their doubts about Islam are sure to increase, but when they look to the West—whether it be Canada or France or England—they don’t see much that would inspire confidence. In England, for instance, policemen have taken to wearing high heels and nail polish, and to flying the rainbow flag over the station house. And in Canada, the Prime Minister wears Ramadan socks to gay pride parades. The so-called moderates are sitting on the fence, but with Western nations in full flakiness mode, and with Muslim activists in full supremacist mode, the safer bet is to jump down to the Islamist side of the fence.

How about the Church? Does it present a solid alternative to what Islam offers? Unfortunately, some Church leaders are as wedded to fashion as is Justin Trudeau. And, partly for that reason, the Christian churches seem to have had little impact on the moral tone of Western culture in recent decades. Sayyid Qutb, one of the founders of the Muslim Brotherhood, described Christianity as an ineffectual faith with “no power to make life grow under its influence…” It must sometimes seem like that in Canada. Here’s Giulio Meotti on the “desperate” state of Catholicism in Quebec:

In 1966, there were 8,800 priests; today there are 2,600, most of whom are elderly; many live in nursing homes. In 1945, weekly Mass was attended by 90% of the Catholic population; today it is 4%. Hundreds of Christian communities have simply disappeared.

George Weigel recently described Quebec as “Catholicism’s Empty Quarter.” “There is no more religiously arid place,” he wrote, “between the North Pole and Tierra del Fuego.” But as bad as the situation is with Catholics, the decline of mainline Protestant Christianity in Canada has been even more drastic. More than any other factor, the loss of Christian faith among Canadians helps to explain why Canada may be facing an Islamic future. And it almost certainly explains the new talismanic faith in shallow pseudo-religions such as diversity and multiculturalism.

What is happening in Canada is one more example of the truth of Chesterton’s maxim: “The first effect of not believing in God is to believe in anything.” As Canadians lose their faith in God, they replace it with faith in anything. The prime example is their prime minister, a clueless young man who seems to believe that wearing multicultural socks to a gay parade while shouting “Happy pride to Allah,” is the magic formula that will bring harmony to Canada.

Editor’s note: Pictured above, a woman in a niqab protests outside of Montreal City Hall in opposition to Bill 94 on April 17, 2010. (Photo credit: Allen McInnis/The Montreal Gazette)