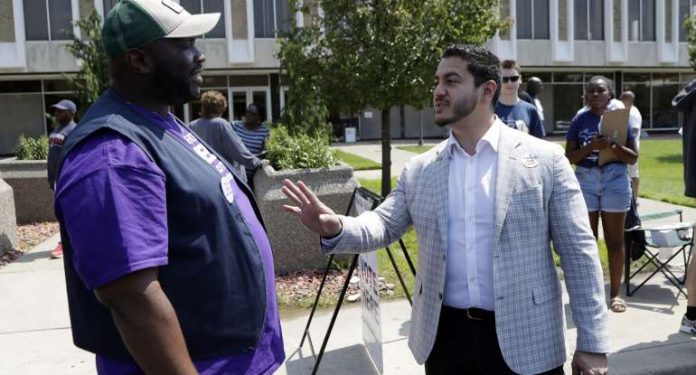 Even though he is a Muslim running in a state that is given credit for helping to put President Trump in office, with a two-term Republican governor and a state legislature controlled by the GOP, Democrat Abdulrahman “Abdul” El-Sayed believes he can be Michigan’s next governor.

Deedra Abboud, an attorney who converted to Islam shortly after moving to Arizona 20 years ago, is running for U.S. Senate in the Arizona 2018 Democratic primary, hoping to unseat Sen. Jeff Flake (R).

Meanwhile, in Massachusetts, a state seen as being on the other side of the political universe from Michigan and Arizona, Nadeem Mazen shares a goal similar to El-Sayed. Mazen wants to become the third Muslim in the U.S. Congress, joining Reps. Keith Ellison (D) of Minnesota and Andre Carson (D-Ind.).

Mazen not only wants to win the 2018 Democratic primary, then the November election, and go to Washington, but he wants to help more Muslims win elections across the U.S. with the Justice, Education, and Technology Policy Advocacy Center (Jetpac Inc.), an activist group he started in February.

El-Sayed’s religion won’t be his only problem in Michigan’s 2018 Democratic primary for governor.  He supports universal healthcare, legalizing marijuana, paying everyone a living wage of a minimum of $15 an hour, and “sanctuary state” status for Michigan.

That’s seen as a very liberal position in Michigan and “we’re not a liberal state,” Ed Sarpolus, a veteran Michigan pollster, told the Los Angeles Times.

And when it comes to Trump, who won the state of Michigan last November, El-Sayed said, “The vote for the current president was not a vote of inspiration. It was a vote of fear and cynicism. We have to believe in the unifying idea of us – the people.”

El-Sayed, on his campaign website, makes a point of emphasizing his modest upbringing. He is the eldest son of immigrants — a tomato salesman and an illiterate homemaker — who came to America from Alexandria, Egypt.

El-Sayed graduated from the University of Michigan, went on to become a Rhodes Scholar, earned a doctorate from Oxford University, and got his medical degree from Columbia University.

He married “the love of my life, Sarah,” the daughter of immigrants from India, who is also a doctor, and was tasked at the age of 30 with rebuilding the Detroit Health Department.

It could be a classic Michigan-blue collar rags to riches story, except for one thing: This guy is Muslim.

El-Sayed realizes there is no getting around his religion.

“A lot of my friends tell me … you’re relatively young,” the Los Angeles Timesreported he told the 50 or so liberal activists filling the pews at a church in downtown Kalamazoo. “What they sometimes don’t say is, ‘you’re also relatively brown and relatively Muslim.’”

Joe DiSano, a Democratic Party strategist, said religion could be El-Sayed’s biggest challenge, if only because he will be campaigning in some small Michigan cities where voters have never seen a Muslim.

Abboud supports the Affordable Care Act and rails against “repealing and replacing it with a plan that strips away healthcare for families and crushes the economy.”

She also advocates government environmental protection programs because “private enterprise is not designed to self-regulate for the betterment of society; it is designed to make money for its owners.”

While Abboud said she supports the Second Amendment, she has called for immigration reform that would lead to a “pathway to legal status, at a minimum for those without criminal convictions, so people living in our state are no longer hiding in the shadows.”

Being a Muslim, especially a Democratic, liberal Muslim, is also a massive problem for Abboud. Like El-Sayed, she is running in a state that also went for Trump in 2016 and is seen as even more Republican and conservative than Michigan.

And also like El-Sayed, she realizes being a Muslim isn’t going to make her campaign for the Senate any easier. But for her, it’s more than a question of politics. It’s a matter of personal safety.

Abboud told AZ Central she received hundreds of hate messages on Facebook because of her faith. An Abboud campaign spokeswoman said they always request police escorts at campaign events.

Mazen told Reuters he realizes it’s more than the mysteries surrounding the Muslim religion for many in Michigan, Massachusetts, and across the nation that will raise questions in the minds of voters he and El-Sayed will be meeting on the campaign trail.

“People don’t understand what it means to me to have a Muslim faith and to believe that faith compels me to serve every American and to serve the Constitution,” Mazen said.

Mazen, who became the first Muslim Cambridge, Mass., city councilor, hopes his campaign, and that of El-Sayed, are the beginning of a trend. He has issued a nationwide “open call” to his fellow American Muslims, offering to train them to run for elective office.

“Muslims are unbelievably underrepresented in elected office,’’ Mazen told the Boston Globe. “Having Muslims in elected office, the way I am, can change the narrative from being on the defensive [in the media] … to the work that we actually do around issues such as affordable housing.”

Mazen said that since he launched Jetpac in February more than 100 Muslims have expressed an interest in being trained to run for elective office.

Jetpac was launched shortly after Trump announced his first executive order that was intended to block people from several Muslim-dominated countries from coming to the United States.

Mazen said his decision to move forward with Jetpac was not a direct response to that order. But he believes the reaction to Jetpac and Muslims deciding to seek office reflects the community’s response to what some see as anti-Muslim sentiments in America evidenced by the election of Donald Trump.

“Trump is the outcome of a 20-year process, and we are actually responding to that process,” Mazen told the Globe.