In an attack that bears the hallmarks of recent terror assaults in the UK, Spain and France, a truck veered into the West Side Highway bike lane at 3:15pm on Tuesday afternoon, and mowed down cyclists and pedestrians, leaving at least eight dead and up to 15 injured near Chambers Street and West Street, near Stuyvesant High School in lower Manhattan.

Witnesses described a scene of terror, saying a man in a truck ran over two people before plowing into a school bus.

More than a dozen people were hit when a Home Depot rental truck zoomed at least 10 blocks down a popular bike bath from West Houston to Chambers streets according to NBC. Witnesses at the scene said the man also hit a school bus at some point during the alleged rampage.

Sources added that the driver hit a school bus at Chambers street and got out of the vehicle with a gun. A witness said the man then fired the weapons – which sources said may have been a BB gun.

Photo of the alleged suspect

The as-yet-unidentified suspect has reportedly been taken into custody after being shot by police.

Witnesses tell police that the driver of the vehicle shouted ‘Allah Akbar.’

Discussing the incident, Mayor Bill De Blasio said that the attack was a “cowardly act of terror.”

A U.S. counterterrorism official told NBC News that the intelligence community is unaware of any claims of responsibility in the attack at this time; a police source said authorities are exploring for any international ties.

“Jesus! A car just ran over 2 people and then crashed into a school bus. I see two dead bodies and citibikes on the floor destroyed,” a Twitter user wrote.

“A guy got out with his biker jacket and started shootin gup the place,” he said. “All the kids were in the courtyard at P.S. 89 and started running.” The suspect was then shot by police, according to sources. He’s in custody, police say.

Students from Stuyvesant High School and other witnesses in the area tweeted that they’d heard gunshots. A message has been left with the Department of Education. A large number of police vehicles could be seen near West Street and Chambers Street in Tribeca, which is near a community college, Stuyvesant High School, and a few blocks north of the National Sept. 11 Memorial.

According to audio recorded by the service Broadcastify, the NYPD cleared the area around the truck to bring in bomb squads shortly after the violent episode. “Box truck on Chambers and West, we need that area cleared,” said one officer. “We need everybody away from that truck.”

NBC is reporting that shots were fired at the scene, but it’s unclear if those shots were fired by police responding to the incident or the attacker. The vehicle also collided with a school bus carrying students from Stuyvesant High School. NBC aired the following footage shot by high school student of purported assailant in Manhattan.

Not gonna share it, but AP has a photo of at least one body covered with a white sheet on a bike path in lower Manhattan 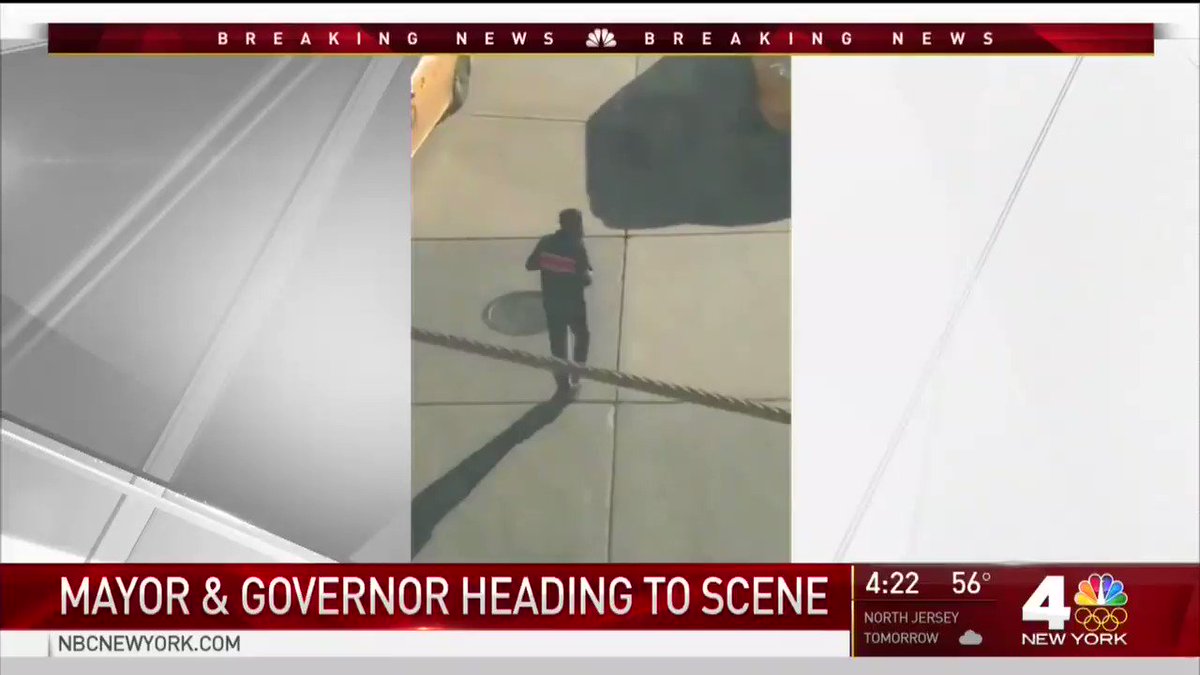 Police say they are not looking for additional suspects. Several nearby buildings, including Stuyvesant High, were placed under lockdown. The FBI’s New York field office is also responding. The attack occurrred at 3:15 pm Eastern Time. NBC is reporting that the driver fired a paintball gun or a bb gun before driving the truck into pedestrians. NBC has confirmed that the incident was a deliberate attack.

One witness told the New York Post the suspect got out of his vehicle and was armed with two guns.

CBS is reporting that police are treating the incident as a terrorist attack:

JUST IN: CBS News reports the incident in Lower Manhattan is now being investigated as a terrorist attack.

“What happened was there was a car crash … he came out of one of the cars. He had two guns,” a 14-year-old Stuyvesant High School student said. “We thought it was a Halloween thing. He started running around the highway. There was another guy in a green shirt that was chasing him around.” “I heard four to six gunshots — everybody starts running,” she added.

According to some, this may be the most serious NYC incident since Sept 11:

Grisly video taken at the scene shows the aftermath of the attack:

Police shut down the FDR to rush victims to Bellevue Hospital. The West Side Highway has been closed from 20th street down. The Home Depot truck used in the attack can be seen in the photo below…

The school bus rammed by the truck appears badly damaged… 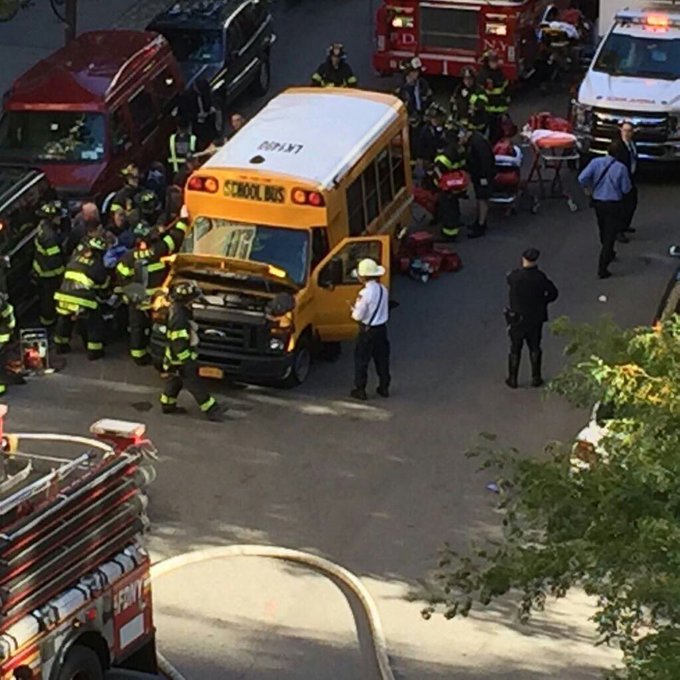 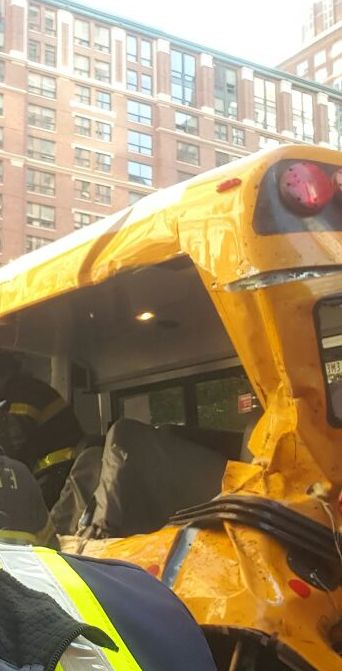 Witness reports are trickling in…

“I saw a truck – a white pick-up truck – going down the bicycle lane and running people over,” one witness told CBS.

NYPD has confirmed that the suspect is in custody. 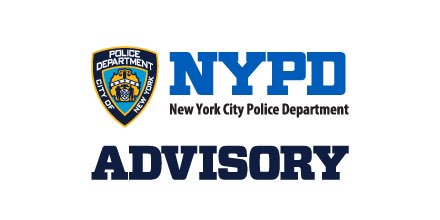 Currently there is one person in custody. No others outstanding. All information is preliminary as the investigation is ongoing. 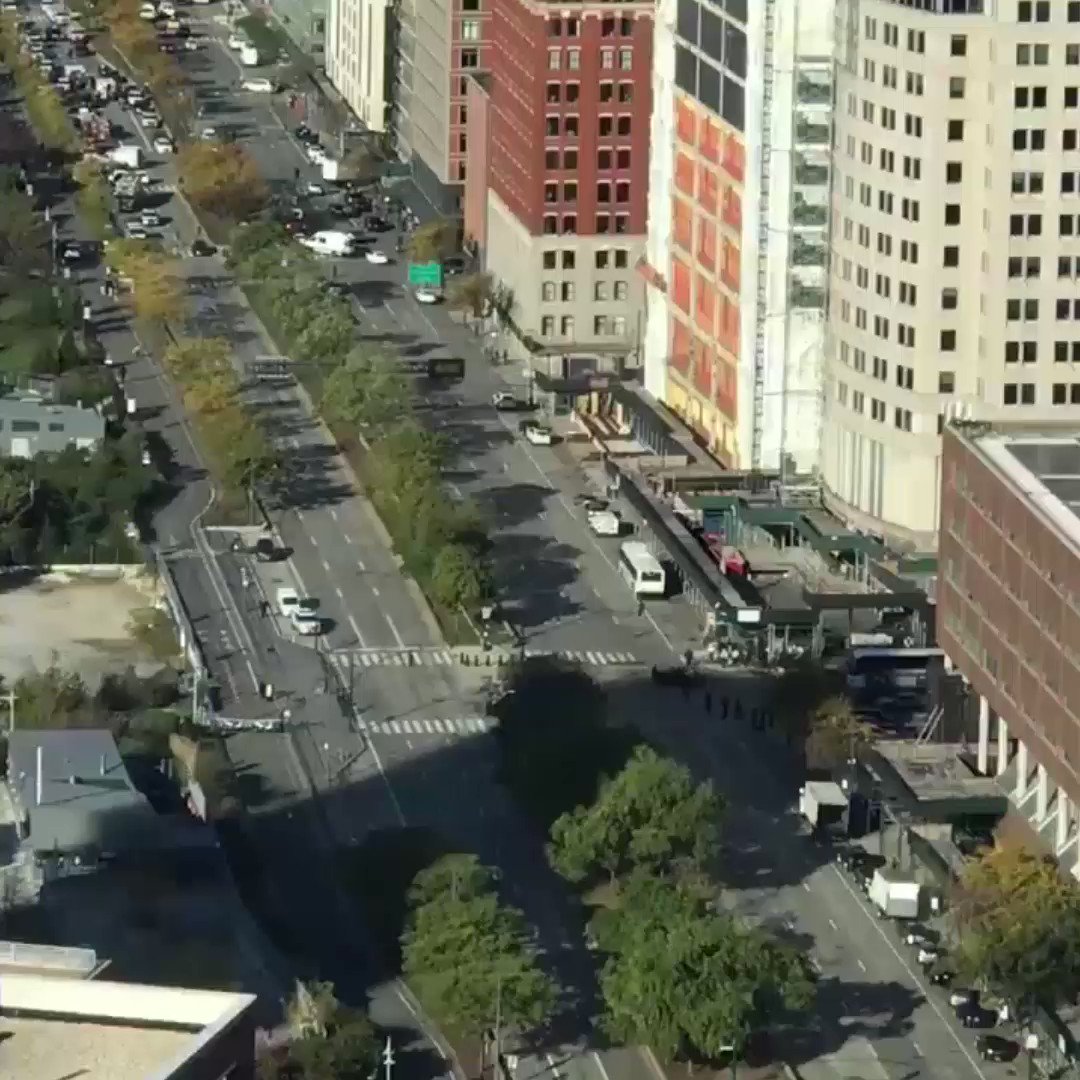