Eight people are dead and 11 have been injured after a truck mounted a bicycle path in lower Manhattan on Tuesday afternoon, mowing down cyclists and runners while shouting ‘Allahu Akbar’.

The 29-year-old driver mounted the bicycle path at Houston Street at 3.05pm and drove 17 blocks downtown, knocking down victims before coming to a stop at Chambers Street where he eventually crashed in to a school bus.

There were children inside the school bus at the time. They are among the injured people now in hospital.

The terrorist then emerged from his rented truck waving a paintball gun in one hand and a pellet gun in the other.

He was shot in the stomach by an on-duty NYPD officer who was at the scene and is now in hospital under police supervision.

Police will not release the man’s name but say he committed the atrocity in a ‘cowardly’ act of terror. 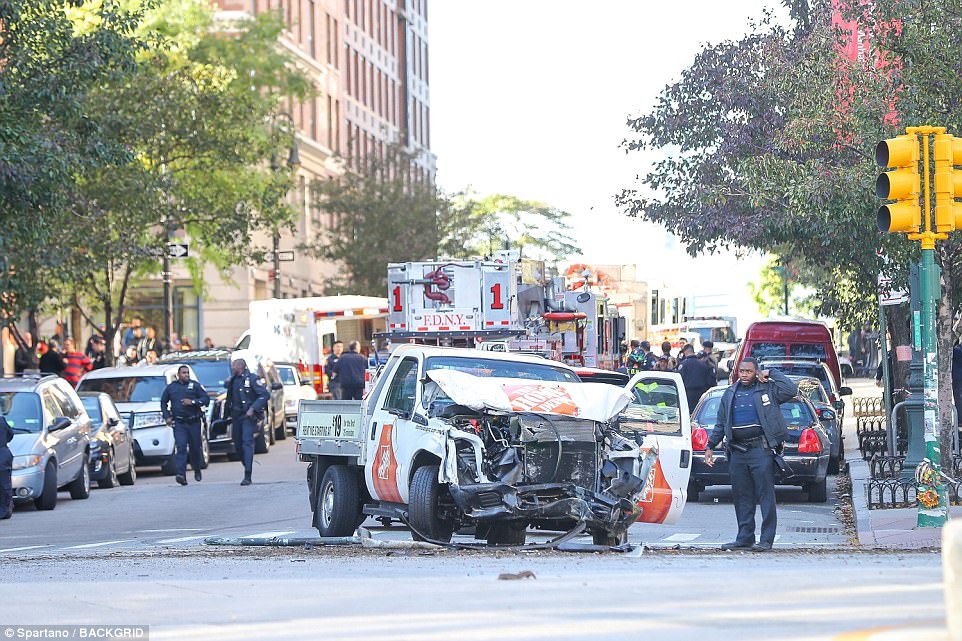 The rented Home Depot truck which plowed through cyclists and runners on a bicycle path on the West Side Highway in lower Manhattan on Tuesday afternoon. Its driver was shot in the leg by police and is in hospital 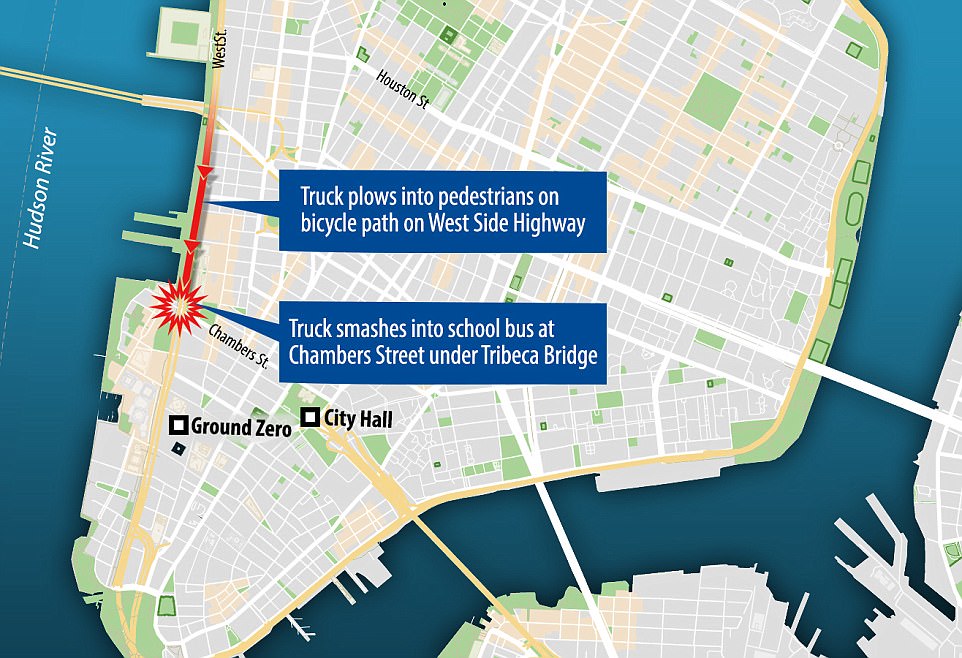 The proximity of the attack site to Ground Zero was a painful reminder of the day, he said.

‘Based on the information we have, this was an act of terror and a particularly cowardly act of terror aimed at innocent civilians, people going about their lives.’

He was joined by New York Governor Andrew Cuomo who prayed for those killed.

‘It reminds us all how precious life is. They left the house the morning, they were enjoying the beautiful west side of Manhattan on a beautiful fall day and now they will not be returning home.

‘That shock and that pain is going to be very real,’ he said.

NYPD Commissioner James O’Neill confirmed the driver’s movements. He would not release his identity or nationality, saying it was too early in the investigation to share such details.

President Trump acknowledged the attack on Twitter, describing the perpetrator as a ‘sick’ individual.

‘In NYC, looks like another attack by a very sick and deranged person. Law enforcement is following this closely. NOT IN THE U.S.A.!’ he said.

First Lady Melania Trump, who was in Manhattan when the attack occurred, said: ‘My heart breaks for NYC today.

‘Thoughts & prayers as we monitor the situation.’ 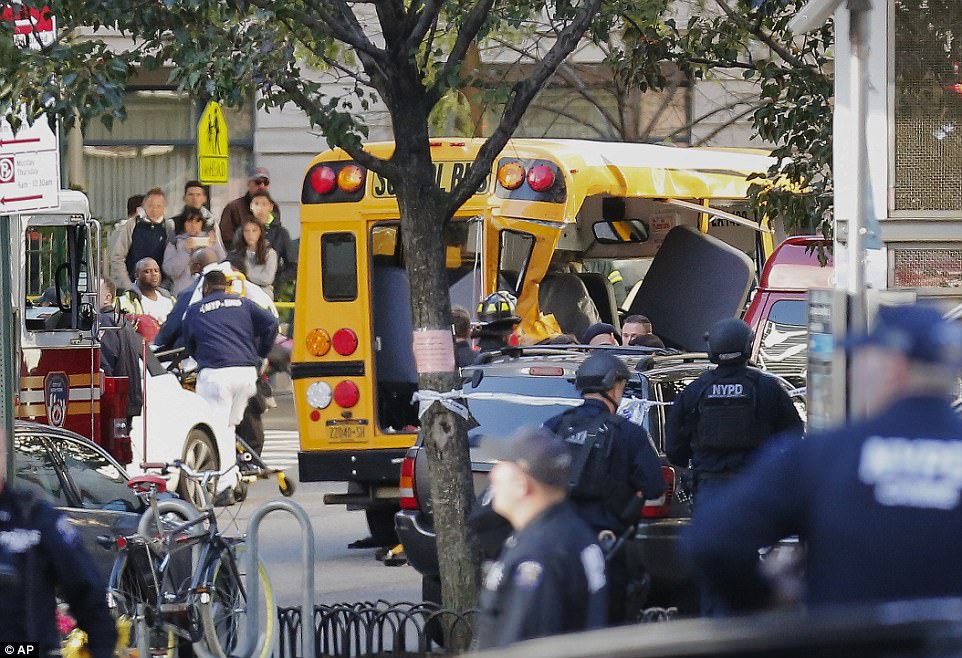 The driver eventually came to a stop beneath the Tribeca bridge at Chambers Street where he got out of the car and was shot. The car took with it a large amount of debris from the cycle path and beside it and was smashed in at the front

Cyclists are among the dead. Above, one victim lies beneath a sheet next to a crumpled Citibike after being hit

Witnesses described hearing five to ten gun shots, all of which came from police guns.

Others ran for their lives as they watched the truck plow into pedestrians after veering off the road.

Shocking video footage from the scene showed cyclists lying on the ground with their bikes smashed in to pieces around them.  By-passers were seen tending to them as they awaited medical attention. 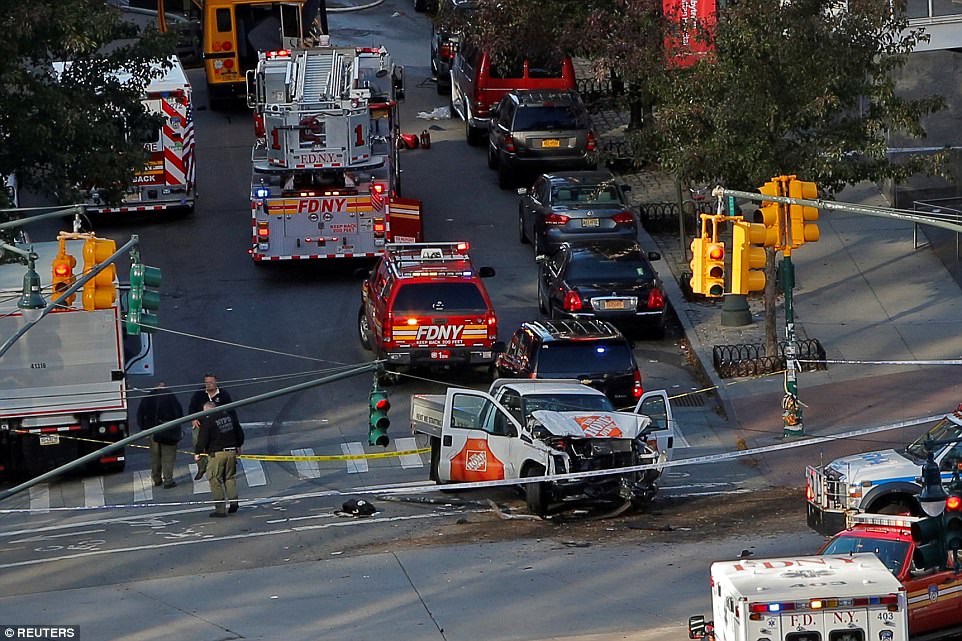 The truck came to a stop after crashing into a school bus at Chambers Street. It remains at the scene

A woman is seen being treated by paramedics at the scene of the attack in Tribeca, downtown Manhattan, on Tuesday 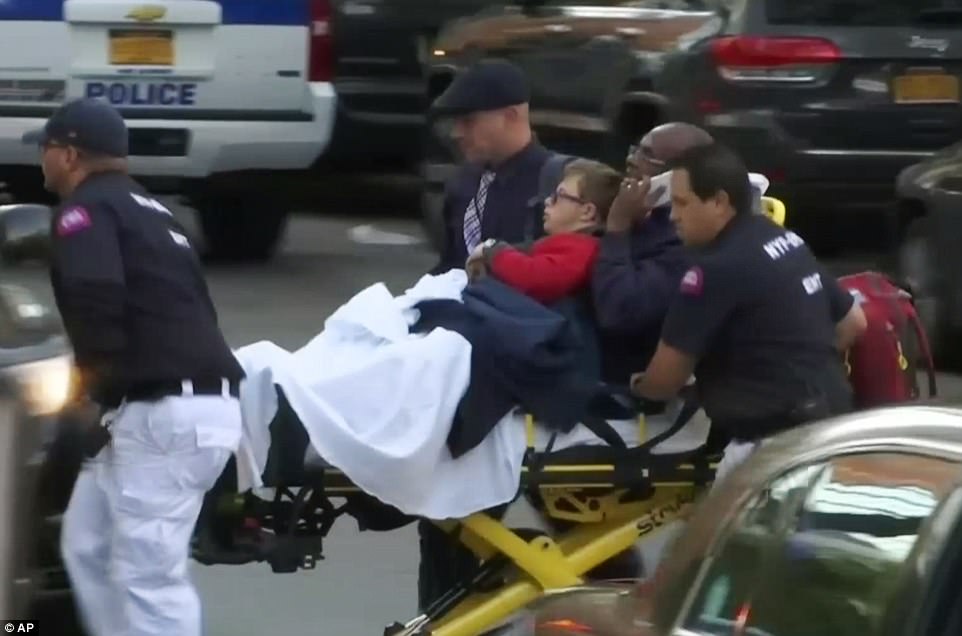 Within minutes of the first reports, there was an enormous police and fire service presence at the site.

Ezequiel Gonzalez, 18, a speech coach at Stuyvesant High School, told DailyMail.com at the scene: ‘I heard what sounded like gas caskets and I went up on the bridge and saw a car caved in.

‘Then I was pushed back and saw the ambulances arriving. The school was put on lock down.

John Williams, 22, of told DailyMail.com he was there around 30 seconds after the gun shot: ‘I saw one man lying on the ground being looked after by paramedics and cops, another man getting arrested and what seemed like another man running towards the Hudson River.

‘I came out and saw a man holding two guns. I could still smell the gun fire. It was a very strong scent. I was concerned for the safety of everyone because there was someone walking around with a gun.’

Williams said he heard between five and ten gun shots in total.

At the time, school children were being let out of class after a day of Halloween festivities.

NYPD descended on the scene heavily armed. They have one person in custody

Today’s terror attack in New York is chillingly similar to a spate of killings in Europe in recent months where vehicles were used.

It is believed six people were killed by a truck driver who mowed them down on a bike path in lower Manhattan.

The driver made his way from Houston Street down towards Tribeca where he mounted the bike path on the West Side Highway shortly after 3pm.

After striking several cyclists and runners, he came to a stop when his truck crashed into a school bus beneath the Tribeca bridge.

But it is not the first time a vehicle has been used to carry out mass murder in Western Europe with similar atrocities taking place in Britain, France , Germany, Spain and Stockholm and claiming well over 100 lives.

In August, Barcelona terrorist Younes Abouyaaqoub calmly walking away seconds after ploughing a van into crowds on the Ramblas murdering 14 people.

Abouqaaqoub was part of a 12-man cell who brought terror to Barcelona on August 17 and 18.

Hours after the Ramblas attack, five other members of the gang ploughed into pedestrians in the nearby seaside town of Cambrils before they went on the rampage with an axe and large knives, stabbing one person to death.

On Bastille Day in the summer of last year, 86 people were killed when a truck was driven through crowds enjoying fireworks in Nice

Low tech attacks using stolen and hired vehicles to randomly rammed into crowds, have been increasingly used by terrorists unable to get hold of guns and explosives.

‘Whether they are going to be permanent or temporary, time will tell. It is very difficult to stop, nigh on impossible.’

Before today’s attack there had been a series of atrocities using cars and trucks in 2016 and 2017.

In June a team of jihadists used a hire van to drive through pedestrians at London Bridge before going on the rampage with knives.

On March 22, Khalid Masood, 52, drove a Hyundai 4×4 over Westminster Bridge, mowing down members of the public before crashing into a fence beside Big Ben.

He then got out of the car and attacked PC Keith Palmer with a knife.

Masood was shot twice by police and died when he was taken to hospital.

Five people died in the attack, including PC Palmer.

In April, in central Stockholm, the capital of Sweden, a hijacked truck was deliberately driven into crowds before being crashed through a corner of a department store

The day after the Westminster attack, a man in Antwerp drove into a crowded shopping area in the Belgian city in an attempted attack, but no one was injured.

In April, in central Stockholm, the capital of Sweden, a hijacked truck was deliberately driven into crowds before being crashed through a corner of a department store.

An ISIS-inspired massacre took place in Germany when a terrorist drove a truck through a Christmas market in Berlin .

Twelve people were killed in the attack on December 19.

Anis Amri stole a cargo truck and killed 12 people when he drove through a Christmas market next to the Kaiser Wilhelm Memorial Church at Breitscheidplatz.

Among the dozen people killed was the original driver of the truck Lukasz Urban who was found dead with a gunshot wound in the passenger street.

Amri was a Tunisian who had failed to gain asylum status in the country. He was killed in Milan four days later after an international manhunt.

But the most deadly was the driver of a tractor-trailer who targeted Bastille Day revelers in the southern French city of Nice in July 2016.

On the evening of July 14, a 19-tonne cargo truck was driven into crowds on the Promenage des Anglais.

ISIS fanatic Mohamed Lahouaiej-Bouhlel was behind the wheel and after exchanging gunfire with police, the Tunisian migrant was shot dead.

Thousands had gathered on the seafront to watch the fireworks that night. 86 of them died and 434 were injured.