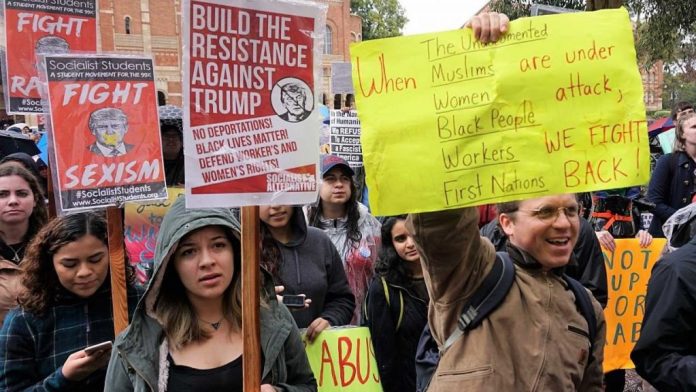 At first glance, there seems to be little in common between the modern “progressives” of the culturally Marxist Left and the regressive cultural, political and religious force of recrudescent Islam. One prizes social license while the other enforces a punitive “moral” code; one claims to celebrate eccentric individuality while the other, both literally and figuratively, dresses in a dour uniform of orthodoxy. One extols homosexuality, transgenderism, and all forms of sexual license; the other throws gays off buildings and murders teenage girls in what they grotesquely dub “honor” killings.

And yet, they have become de facto allies in the war against the civilization and culture of the West. How can this be?

The answer is simple: operating on the old adage that the enemy of my enemy is (at least temporarily) my friend, the international Marxist Left and Islam share not only a common enemy—us—but also a common goal: to get us to submit to their unabashedly coercive globalist ambitions. For what satisfaction is there in merely defeating an existential enemy when you can also have the satisfaction of seeing him before you, on his knees, head bowed, waiting for the chop and knowing he has it coming?
Frenemies

It is this shared purpose—the very name “Islam” means submission—that currently unites these ostensibly opposed ideological foes. Islam, of course, has been at violent, bloody war with every non-Islamic land with which it comes into contact, and has been since it swept out of the Arabian desert in the seventh century, hell-bent on conquest. Along its way, it destroyed the indigenous peoples and cultures it conquered, including the Jews of North Africa, the Christians of Asia Minor, the Zoroastrian Persians and the Hindus of what today is called Pakistan. By turns, it was once regarded as both a Jewish and a Christian heresy, as it borrows liberally from both faiths, but unchecked it quickly morphed into the most destructive force in world history, and one that continues to pose a mortal threat to the West to this day.

Although what used to be called Christendom repeatedly turned back the Islamic hordes, defeating them decisively starting with the First Crusade and continuing through Lepanto and Vienna, Mohammedan attempts at conquest continue to this day via the anodyne route of “immigration” and the “refugee” crisis currently plaguing front-line states such as Hungary, Austria, Greece, Italy and now—thanks to Angela Merkel’s inexplicable and culturally suicidal decision to admit upwards of a million “refugees” from the Middle East and other Muslim lands—Germany. This stupefying act of treachery, couched in the usual Leftist terms of “inclusion,” “anti-racism,” and the “welcoming culture,” will go down in history as one of the West’s greatest blunders, an unforced error of incalculable proportions.

But was it? The Marxist Left has been in open and outright war with Western society since the mid-19th century, and one its hallmarks is its insidious weaponizing of Judeo-Christian societies’ best instincts and using them to undermine it. Having failed to realize Marx’s vision of the classless society and the workers’ paradise—his crude, reductionist view of the Industrial Revolution makes for risible reading today, should one wish to slog through Das Kapital—Marxism then molted into the tenets of the Frankfurt School, which gave us critical theory, political correctness, and the excesses of the sexual revolution. It is now in full reformation mode, the cultural Catherine Wheel having turned once more, crushing the Harvey Weinsteins of the world beneath it. (For a full discussion of the Frankfurt School, please read my book, The Devil’s Pleasure Palace, as well as its forthcoming sequel, The Fiery Angel.)

Merkel has no visible love for the West. Although born across the line in Hamburg in what was then West Germany, she was raised near occupied Berlin in the Communist system of the German Democratic Republic, learned to speak fluent Russian while also instructed daily in the evils of capitalism and religion. When the GDR collapsed in 1989 she naturally but opportunistically switched sides and rose within the main center-right party in unified Germany, the CDU/CSU. Chancellor Helmut Kohl, who had shepherded the country through reunification, brought her into his cabinet. When he was deposed, Merkel was there to succeed him, first as party leader and later, in 2005, when she defeated then-Chancellor Gerhard Schroeder. She’s been in charge ever since.

That she fully absorbed her early lessons is evident by her actions. She is a fierce proponent of the European Union, and has been pressuring the front-line member states not only to absorb the first influx of “refugees” and allow them to continue on to Germany, Scandinavia, and Britain, but to resettle them in the same lands that knew the Musselman yoke for centuries, such as Hungary. She’s counted on the culturally dispirited Germans—who, in the aftermath of two world wars, really have had all the fight beaten out of them—not to put up much of a fuss as they bid wilkommen to their replacements from the ummah.

Merkel—lumpy, unlovely, childless—makes a fitting image for modern Europe: a bureaucrat imposing the terms of surrender on a defeated land while quietly shuffling its original inhabitants (Germany’s birthrate is 1.5) into the ether of nonexistence. Her welcoming of Islam indicates her complete indifference to religion, and to the distinctions between them. Her insistence that the lesser countries of the EU conform to her autocratic wishes is entirely indicative of her upbringing in Marxism-Leninism, as is her pique with Hungary and Poland—two countries with long, negative experience with both Soviet communism and Islam. It is impossible to see Merkel as anything other than one of the Soviets’ greatest posthumous triumphs—a stealth “conservative” on a mission to rebirth the idea of the USSR with a capitalist, social-welfare patina obscuring its fundamentally socialist objectives.

Which brings us back to cultural Marxism, which will be my chief focus in these weekly essays here at American Greatness.

Just as anyone with any experience of Islam understands how dangerous it is to Western values, so should we all be alert to the goals of cultural Marxism, which, like Islam, is a parody of Christianity. As Ludwig von Mises wrote in Bureaucracy:

As free peoples of the West—at least for now—this is the choice before us. Do we wish to be autonomous individuals, the architects of our own destinies, the heroes of our own movies, in the manner of all the great heroic narratives of the West, from the Greeks on? Or do we wish to be a cog in the machine, a human battery cell in “The Matrix,” living an illusion and dreaming of freedom? On these two choices will the struggle be fought.

Which side are you on?

About the Author: Michael Walsh

Michael Walsh is a journalist, author, and screenwriter. He was for 16 years the music critic of Time Magazine. His works include the novels, “As Time Goes By,” “And All the Saints” (winner, 2004 American Book Award for fiction) and the “Devlin” series of thrillers; as well as the recent nonfiction bestseller, “The Devil’s Pleasure Palace.” A sequel, “The Fiery Angel,” is scheduled to appear in 2018.
Share Our Work