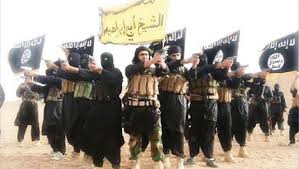 Didn’t you want to wipe the sneer off that kid’s face – the one who drove a truck into eight innocent people on that Manhattan bike path?

The Manhattan truck killer should finally get all American patriots to cry out in outrage.

In spite of our heroic military taking casualties, in spite of Trump-Mattis finally calling jihad the named enemy, most of this country is not yet serious.  This is war.  Our parents and grandparents did not hesitate to declare war on The Day that Lived in Infamy, the Japanese surprise attack on Pearl Harbor.  But a morally weakened, liberal, and feckless U.S. Congress failed to declare war after 9/11/01, even after acts to murder of men, women, and children occurred time and time again, on our soil, and on the soil of our allies.  This is the most abject act of plain cowardice in American history, and conservatives now have their own web media to tell that truth.

Who has given aid and comfort to our enemies?

First of all, the Democrats under Obama and Hillary, who have declared war – not on the murderous enemy of civilians in Manhattan the other day, but on our duly elected president of the United States.  The left-stacked courts may not go along, but the people of the United States can recognize it without the shadow of doubt.  Our proper response is not violence, but a loud and clear message by a hundred million voters for Trump that the behavior of the left will not go unanswered anymore.  It is time to get serious.

Second, we know that Obama did everything in his power for eight years to surrender to jihad, to turn nuclear weapons over to Iran (which is known to collude with North Korea) with Putin’s collusion.  Putin and the Chinese have to know that the American people hold them responsible for their active support of the Iranian (jihadist) and North Korean (self-declared nuclear enemy) of the United States of America.

Third, patriotic Americans must act much more cohesively, in exactly the way we did with the National Football League, which is now in danger of bankruptcy for the way it allowed its employees to show open contempt for the flag of the United States of America.

Fourth, the left, which has a treasonous doctrine in Marx, Lenin, and the rest, must be deprived of our dollars, just as patriots deprived their favorite NFL of dollars in the face and plain and obvious disloyalty.

Fifth, our government swarms with disloyalty to our constitutionally elected POTUS.  If the bureaucracy won’t fire known and suspected criminals, we can act with our votes, our voices, and our dollars to stop what is plain and obvious treason to common sense.

Sixth, our armed forces, consisting of dedicated men and women who are sworn to uphold the United States Constitution, are showing signs of confusion and irresolution – though not in combat.  The U.S. Navy just accused its own personnel of human errors in failing to stop huge accidental ship collisions.  This is a major failure of elementary training in the Navy, and it has to stop.

Seventh, the Democrats in Congress have apparently shielded, paid, and protected a ring of “I.T. experts” who all belong to the same Pakistani family, and who penetrated the electronic communications of the Intelligence Committee of the House.  None of the congressmen who colluded, actively or passively, in that plain and obvious endangerment of national security should be re-elected. Every single one, including the House leaders, should be targeted by American patriots for peaceful and legal retaliation.

Eighth, patriots should demand that the recent slap on the wrist given by a military judge to a soldier who abandoned his unit in Afghanistan, leading to the deaths of six fellow soldiers who searched for him, that that soldier should be severely punished for desertion, for dereliction of duty.  A charge of treason in time of war should be considered by a court martial staffed by combat officers, not bureaucratic placeholder.

When the United States was attacked at Pearl Harbor by Imperial Japan in 1942, FDR acted like a war leader by dismissing the upper ranks of the U.S. Navy.  These individuals were not directly guilty of treason or sabotage, or anything near it.  But they carried command responsibility for the near destruction of the U.S. Pacific Fleet and were therefore fired.  Now that the United States has been attacked again and again, in clear and open violation of international law, we must show seriousness by holding commanders responsible for failures of training, or failures of duty, of all troops under their command.

Senator Lindsey Graham has demanded military trials of jihad attackers.  Because our civilian courts have shown themselves to be incapable of actions to protect the United States of America, the military court system, which is legally entitled to detain and try enemy combatants, must do so.

We have to get serious.  In World War Two, ordinary people reminded each other, “There’s a war going on.”  Well, we are in a defensive war, whether you like it or not.

Conservatives have shown what works – without violence – by turning off NFL teams that allow their players to disrespect the flag.  That is how we should all act.  The left calls it nonviolent action.  Well, if it works, let’s do it.  Boycott all the corporations that give aid and comfort to the enemy.  The bureaucracies might be afraid to act, but the people can act.

Electing Donald Trump was the first coherent American response to jihad.  If our politicians are too lazy, too cowardly, and too bought up by our enemies and their enablers, we should fire them, and let them know ahead of time.  No violence, no violation of civil law, but the unified voice of patriotic Americans should now be heard loud and clear.

Congress has long been too cowardly to declare war, which is its constitutional duty.

The word “treason” is a hard word, and it has to be used carefully.  But we have the definition of treason in time of war right in front of us.

American patriots must hold our flabby and treacherous politicians to strict account for their actions and failures to act.  Our politicians may be a sorry bunch, but we are not.  Peaceful but loud protests, peaceful demonstrations, open and vocal support for the duly elected president of the United States, and boycotts of organizations like the NFL that sponsor or tolerate acts of open rebellion and hatred for the United States of America must be punished by our purchasing decisions, until such time as the political elites catch on to return the force of law to plain and obvious acts of “aid and comfort in time of war” – treason as defined by the U.S. Constitution.

Patriots must not engage in illegal actions, which are self-defeating. But we must let our voices be heard.  About one third of Americans understand exactly what is happening and are properly outraged by continued acts of violence against children, women, and civilian men engaging in peaceful activities.  Another third of the country has been suborned by the enemy and his domestic enablers.  There is a middle third that does not have the intelligence or the personal determination and courage to act according to the state of war that has been declared and waged against the United States.

This is a time of declared war.  The U.S. Congress has shown itself too cowardly to recognize reality, and a number of its members have obviously given in to bribery and media pressure to fail in their duties.  We can tell who they are.

War has been declared on us by the two big sources of jihad, Sunni and Shi’ite, over and over again.  Trump has now mobilized the Saudis and the Sunni world to publicly take our side, but there are obviously still trained murderers out there willing to mow down innocents on a bike path.  We must demand of any publicly declared ally of the United States to arrest, convict, and punish those who pose a clear and present danger to the United States of America.  That is what true allies do in time of war, and the Arab Gulf States owe us the loyalty due to an ally at war.

In World War II, our parents and grandparents reminded each other, reluctantly, that “this is war.”  We, their children and grandchildren, can do no less.