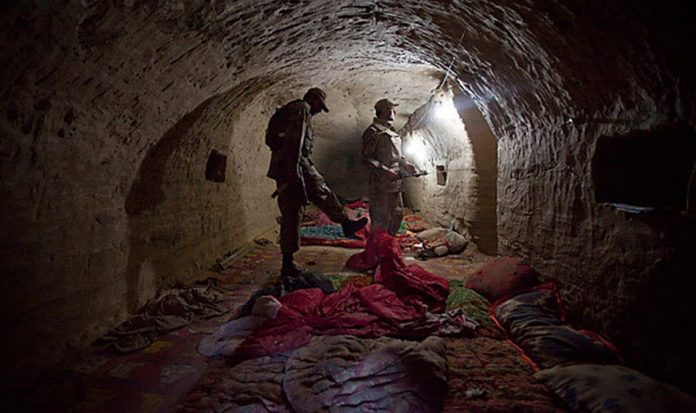 Interviews with al-Qaeda members and bin Laden’s family reveal a pact that allowed the group to prepare for its next phase.

President Trump recently pointed to this relationship to justify de-certifying the Iran nuclear deal. Facing overwhelming European opposition to that move, CIA director Mike Pompeo suggested the al-Qaeda-Iran pact had been an “open secret” during the Obama administration, which had failed to act. Then last week, the CIA declassified a new trove of documents from the 2011 raid that killed Osama bin Laden in his compound in Abbottabad, Pakistan. This document dump, which will take years to sort through and analyze, appeared to confirm the relationship—detailing among other things how Hamza, Osama bin Laden’s son, sheltered in Iran and even got married there; and how, according to one 19-page document, negotiations between al-Qaeda and the Revolutionary Guards in Tehran touched on funding and arming the Sunni terror outfit so it could strike at American targets.
In the days since, several commentators, including in these pages, have dismissed these purported connections as exaggerated, pushed by the White House and its allies to justify the administration’s hostile posture toward Iran. But important new evidence, including interviews with senior al-Qaeda members and Osama bin Laden’s family, gathered by the authors over the past five years, tells a surprising history of the post-9/11 epoch, and it’s one that severely undercuts the conventional view.
Our research reveals that al-Qaeda and covert agents acting for the Iranian deep state first attempted to broker an unlikely agreement more than two decades back, after Saddam Hussein flat-out rejected al-Qaeda’s request for military assistance. The pact then flourished under the George W. Bush administration, when a back-channel from the White House to Tehran, running from 2001 to 2003, discussed it frequently. Former State Department and White House officials in on these talks maintain that the vice president’s office suggested the White House do nothing, worrying that the administration would undermine the campaign to oust Saddam Hussein in Iraq—which was being underwritten by claims he sponsored al-Qaeda and concealed weapons of mass destruction. Finally, according to these same sources, the vice president’s office also told U.S. envoys to Iran and Afghanistan that once regime change had succeeded in Iraq, Tehran was next.
A starting point for al-Qaeda’s struggle to mend itself after the U.S. invasion of Afghanistan came on November 12, 2001, when Osama bin Laden decided to head to his cave complex in Tora Bora. According to family members, bin Laden told his wives at the farewell that he wanted a different life for the children. “Please discourage them from joining this jihad,” he told his third wife Seham, a Saudi schoolteacher, in a conversation some of his children overheard and described to us. As bin Laden took off for the caves, and most of his family was smuggled into Pakistan, one of al-Qaeda’s most important officials headed for Iran. On December 19, 2001, Mahfouz Ibn El Waleed, a whip-thin Islamic scholar from Mauritania, boarded a bus in Quetta, in the Pakistani province of Baluchistan, heading for Taftan, the official border crossing into Iran. He told the story to us over many lengthy meetings, explaining how he travelled on counterfeit documents as “Dr. Abdullah,” a “medic, treating refugees from the Afghan war,” carrying a suitcase filled with U.S. dollars, in a bus with a wanted poster for bin Laden pasted to the windscreen.
At Osama bin Laden’s side for a decade prior to 2001, Mahfouz had become a pivotal figure on al-Qaeda’s leadership council and the head of its sharia (legal) committee. When he began his journey to Taftan, he was on the UN Security Council’s sanctions list, and was wanted by the FBI for questioning about his involvement in managing the logistics for the 1998 attacks on U.S. embassies in East Africa. The CIA had raided his home in Sudan in 1998, investigating the Mauritanian’s role in counterfeiting and money laundering, as well as his attempt to consolidate bin Laden’s assets in Khartoum to send to Afghanistan. He had fled only moments before the raid, and he’d been on the run ever since. Mahfouz hoped, as his bus headed for the Iranian border, to persuade Iranian agents to offer a more permanent sanctuary to al-Qaeda’s leaders and bin Laden’s family.

Geography, politics, and history lay behind a seemingly bizarre decision by an outlawed Sunni outfit to attempt to partner with a recalcitrant Shia power. Iran shared a common border with Baluchistan in Pakistan, close to where many fighters and bin Laden family members were hiding. Mahfouz had also been to the Persian Gulf before, sent there by bin Laden in 1995 to win military support for al-Qaeda. Mahfouz had first visited Iraq, where Saddam Hussein had rejected his request; however, in Iran, the Quds Force—a covert unit within the Revolutionary Guards responsible for clandestine foreign policy—was open to it, by Mahfouz’s account. On the table was an offer of advanced military training, with al-Qaeda fighters invited in 1995 to attend a camp run by Hezbollah and sponsored by the Iranian Quds force in Lebanon’s Beqaa Valley. Trainers there were researching how to manufacture “shaped charges”—powerful IEDs that could pierce armor plating, and would later cause havoc among U.S. forces in Iraq.

There is no evidence that this 1995 pact came to anything. But a door was opened, and on December 20, 2001 when Mahfouz reached the Taftan border crossing and made a dash into Iran, he was greeted on the Iranian side by agents from the Ansar ul-Mahdi Corps, an elite cell within the Quds Force; he eventually won an audience in Tehran with its commander, General Qassem Soleimani. However, Iran was not yet fully committed to cooperating. According to senior U.S officials then working on South Asia and Afghanistan for the State Department and the White House, Iran’s Foreign Ministry, fearful that the U.S. would turn its military attentions to Iran after it finished the invasion of Iraq for which it was then building international support, reached out to the Americans.

Only 400 strong when the Twin Towers fell, damaged by the U.S. invasion of Afghanistan and then later overshadowed by ISIS, al-Qaeda now, with its leadership split between Iran, Pakistan, and Syria, has quietly rebuilt itself to the point of being able to call on tens of thousands of foot soldiers. Melding with anti-Assad forces, reducing its volubility, and toning down the barbarity associated with it during the Zarqawi years, a reformed al-Qaeda found in Hezbollah and the Quds Force a model for how it might now evolve.