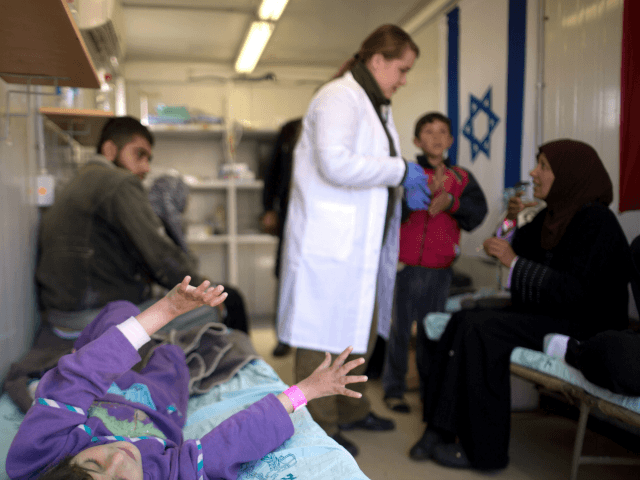 TEL AVIV – Dramatic footage broadcast over the weekend shows Syrian women and their children crossing the border into Israel to receive medical treatment.

It marks the first time the IDF gave permission to a TV crew to film Israel’s humanitarian aid effort, which has so far helped upwards of 4,000 victims of the Syrian civil war.

The footage by Israel Television News (formerly Channel 2) includes interviews with several Syrian mothers who expressed their “love” for Israel and its assistance.

One Syrian mother said, “Israel was thought of as the enemy. … Now that you are helping us, most [Syrians in the Golan Heights] are with you. They love Israel. They see the true face … the reality.”

Another told the interviewer, “It has become unremarkable for Syrian civilians to come to Israel for treatment.”

“Everyone wants to come here. Adults too; not just the children,” she added.

Yet a third expressed her “wish that I could stay here forever.”

Their faces were blurred since they could face death in Syria for accepting medical treatment from Israel, an enemy state.

The report noted, “Someone whose family or friend is given medical treatment in Israel will presumably change his attitude to the enemy.”

When asked who Syrians view as the enemy, one woman answered, “All of them: Islamic State, Hezbollah, Bashar [Assad]. They’re all the same.”

The crossing of 21 mothers and 23 children was filmed over the course of an evening. Their ailments ranged from shrapnel wounds to chronic asthma.

The video was released in July by the IDF

One of the mothers said she came from an area now controlled by the Islamic State terror group. “They execute people next to the mosque,” she said.

The report also contained footage from Safed’s Ziv hospital, including shots of Syrian children drawing pictures featuring Israeli flags and a medical clown entertaining them. A senior army officer said Syrians who are frightened at first gradually come to realize “that nobody is going to harm them here. Quite the reverse. We’re here to help and provide assistance. … Then they start to talk and to describe what they’ve been going through.”

A woman told the interviewer that if she had the choice, she’d be the first to cross the border permanently.

The interviewer asked her how many Syrians would follow.

“All of Syria would follow me,” she replied. “All the civilians left in Syria would come.”

The Growing Threat to Israel and the Region

OPINION: President Trump is the Real Deal for Black Americans