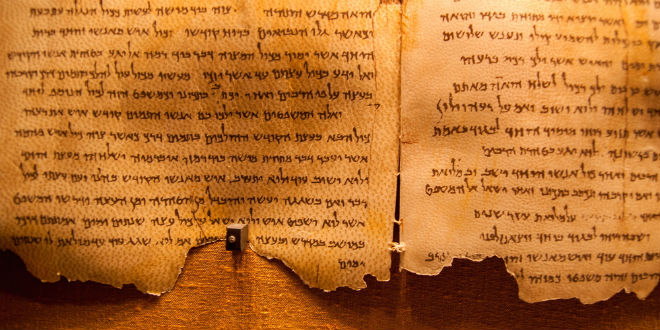 Dead Sea Scrolls on display at the caves of Qumran. (Lerner Vadim / Shutterstock.com)

“And he took the book of the covenant, and read in the hearing of the people; and they said: ‘All that Hashem hath spoken will we do, and obey.’” Exodus 24:7 (The Israel Bible™)

The Palestinian Authority is reportedly preparing to demand that United Nations Educational, Scientific and Cultural Organization (UNESCO) force Israel to “return” the Dead Sea Scrolls to the Palestinians.

During a meeting convened by the U.N.’s cultural body last month, Eitan Klein, who serves as the deputy director of the Israel Antiquities Authority, was told that the Palestinians had informally raised the issue of Israel returning the Dead Sea Scrolls, and that they were likely to make an official request to that end, the Times of Israel reported.

“This is another instance of provocation and the ‘chutzpah’ of the Palestinians trying to rewrite history and erase our connection to our land,” said Israeli Ambassador to UNESCO Carmel Shama-Hacohen.

“The fragments of the scrolls are proof and a weighty archaeological evidence of the historical connection of the Jewish People to the land of Israel,” added Shama-Hacohen.