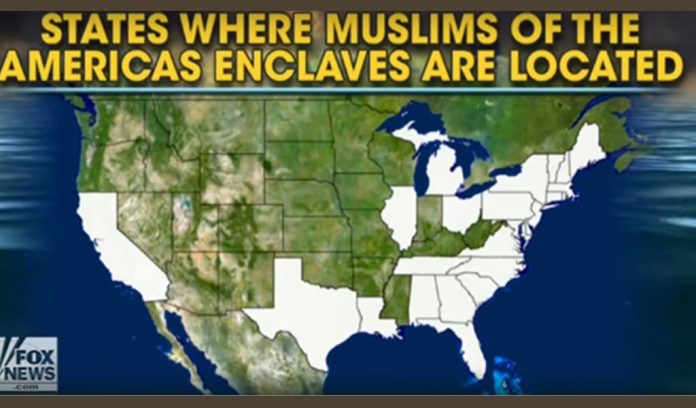 States where Muslims of the Americas enclaves are located (Photo: Fox News)

A U.S. government agency confirmed in a letter to the Clarion Project that an investigation into a terror-linked Islamist cult named Muslims of America (MOA) is ongoing. The group is known for its “Islamic villages” in North America, with its “Islamberg” headquarters receiving the most attention.

The October 19 letter from the Justice Department’s Bureau of Alcohol, Tobacco, Firearms and Explosives (ATF) states that 10 documents from a previous investigation into MOA must be withheld because “the investigation related to the documents that were referred is still open.”

The Justice Department says that releasing the information could interfere with law enforcement proceedings as they concern an “ongoing investigation.”

Muslims of America (MOA) used to be known as Jamaat ul-Fuqra when it carried out a series of terrorist attacks on U.S. soil from the 1970s to the early 1990s. The group is led by a radical cleric in Pakistan and claims to have 22 “villages” in the U.S., some of which are known to have been used for basic military-type training.

FBI documents from 2003 released by Clarion Project earlier this year state that MOA is was linked to al-Qaeda in Pakistan at that time.

The Justice Department letter is referring to a Naval Criminal Investigative Service (NCIS) terrorism and counter-intelligence probe into MOA activity possibly impacting the U.S. military. The Clarion Project has received a series of documents from that investigation dated between 2002 and 2004, and the files confirm that concern about MOA’s extremism is warranted.

The documents refer to “Islamberg” in Hancock, New York; “Ahmadabad West” and “Ahmadabad East” in Red House and Meherrin, Virginia; “Islamville” in York County, South Carolina; “Hassanville” in Ontario, Canada; the “village” in Dover, Tennessee and one in the state of Washington. Travel to and from Pakistan, Jamaica and Trinidad and Tobago is also of concern.

The NCIS explicitly states that MOA is the “U.S. name” for Jamaat ul-Fuqra and that there are reports of gunfire, including automatic gunfire, at some of the “compounds.”

The documents state that “all locations have individuals who are involved with criminal scams to raise money for MOA/JAF,” including worker’s compensation fraud, insurance fraud, credit card fraud, illegal straw purchases of weapons and conversions of semi-automatic firearms into fully-automatic guns. MOA members send the funds to “Islamberg” in New York and/or Lahore, Pakistan for Sheikh Gilani.

“MOA members from all compounds also travel to Pakistan for both religious education as well as military-style training and operational experience fighting in the Kashmir region of Pakistan,” the document states.

The declassified NCIS documents show extensive MOA activity in the state of Virginia outside of the two known compounds.

The Virginia MOA compounds are suspiciously secretive. The documents recount how the compound in Red House behaved after a hurricane in 2004. They refused to grant access to the property for the local fire department and Virginia Power to fix power lines for several days. There are similar stories from other compounds.

At the time of the documents’ writing in 2002-2004, life in MOA’s Virginia compounds was known to be very strict. Two families left the Red House compound after televisions were banned. Multiple MOA-affiliated sources have mentioned this ban to this author as well as Martin Mawyer.

Members living at the Red House compound were instructed to buy firearms and ordinance every single month “to enhance the defenses of their compound.”

The activity at the compound includes paramilitary training, presumably like that seen in videotaped training of women at “Islamberg” around 2002. The investigatory files state:

“Reporting to BATF has noted that MOA, Red House, VA, conducts squad-type training in surrounding woods/swamps and that they have made uncorroborated statements that they would fight any law enforcement encroachment on their compounds by use of defensive force.”

Suspected MOA members are reported to travel to the area and cash counterfeited payroll business checks. They then disappear. Members also operate convenience stores in the towns outside of the compounds and were looking to buy more land at the time.

According to the NCIS documents, the person in charge of the Red House compound’s security was a local Orange City Police Department officer.

“Many” MOA members are alleged to have U.S. military backgrounds, the documents warn.

The investigators are especially concerned with MOA infiltration of Naval Air Station LeMoore and Fort Irwin in California by at least two “long-time members of the terrorism-tied Jamaat ul-Fuqra/Muslims of America” group.

The files refer to suspected MOA members working as a housing contract officer at LeMoore and as a contract administrator with the acquisitions command at Fort Irwin. Concern is also raised about a MOA-owned cab company that may have access to U.S. bases and services performed by a MOA member who is a contractor for Avaya Communications.

At the time the files were authored, at least two “long-time members of the terrorism-tied Jamaat ul-Fuqra/Muslims of America” group were known to have worked as a housing contract officer at LeMoore and as a contract administrator with the acquisitions command at Fort Irwin.

The two MOA members were from the group’s 400-acre “Baladullah” compound in Fresno County, California that was abandoned after its leaders were indicted for defrauding the state government of $1.3 million in a massive charter school scam.

The money is believed to have been funneled to MOA’s leaders in Pakistan. The compound was “alleged to have support terrorism,” NCIS writes.

The NCIS was concerned that the MOA members were using their positions to earn “kickbacks” to fund their organization and its leaders in Pakistan.

Declassified documents since the NCIS papers show that the concern about MOA is ongoing. For example, when the Clarion Project exposed a MOA enclave in Texas in 2014, the report included FBI documents from 2003-2007 with frightening warnings about the threat posed by MOA’s extremism, terrorist history and international infrastructure.

A retired federal source confirmed to Clarion Project in April that he was given urgent national security briefings about MOA after 2009 with an emphasis on the group’s acquirement of weapons and tactical capabilities, including training of women and children.

Government documents are only released after they have aged. Those who contend that MOA poses no threat point to a gap in time between an incriminating investigatory file and the time of publication. However, the U.S. government’s private assessments of MOA since the 70’s have been consistent. The most up-to-date evidence from declassified files show that MOA is not the “moderate” group it claims to be.

MOA members were subjected to a spate of arrests in New York state this year, as reported by this author and Martin Mawyer based in part on their confidential informants inside the group. One reported MOA associate, Ramadan Abdullah, was apprehended with a weapons stockpile.

MOA may also be feeling heat because of its long relationship and public support for Hizbul Mujahideen, a terrorist group in Pakistan and Kashmir. The U.S. State Department designated Hizbul Mujahideen as a Foreign Terrorist Organization on August 16, prohibiting any material assistance to the group.