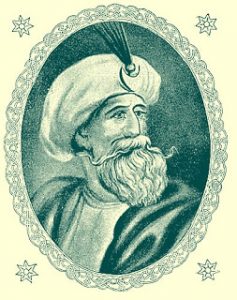 Allahu Akbar = Allah Is Greater — ‘Allah’ is not simply the Arabic word for ‘God,’ but the name of Islam’s chosen deity and ‘Akbar’ does not mean ‘great’, but ‘greater’. Greater than what? The answer is, Allah is greater than whatever God, government, philosophy, or political system you happen to follow or live under.

Understanding Islam is to know Allahu Akbar is the foundation of Islamic Supremacism.

The precedent for Allahu Akbar was set by Muhammad when he attacked and murdered the Jews of Khaybar.  “

We reached Khaybar early in the morning and the inhabitants of Khaybar came out carrying their spades, and when they saw the Prophet they said, “Muhammad! By Allah! Muhammad and his army!” The Prophet said, “Allahu-Akbar! Khaybar is destroyed, for whenever we approach a (hostile) nation (to fight) then evil will be the morning for those who have been warned.” (Bukhari 64.238.4198)

Most every follower of Islam knows this Bukhari Hadith, over glorifying Mohammad’s massacre of defenseless Jewish farmers and the first use of Allahu Akbar as a battle cry.

Did you know most all followers of Islam say Allahu Akbar no less than 111 times a  day totaling  40,515 times  a year in their 5 daily prayers.  The repetition of saying Allahu Akbar 111 times a day becomes a conditioned supremacist response for the follower of Islam.

Kuffar – Derogatory word for a non-Muslim.  Kuffar is an Arabic word that literally means “ingrate or infidel”  For a follower of Islam to call someone a Kuffar is as offensive as using the N word in America.

When a follower of Islam calls you a Kuffar they believe you are the vilest of creatures, referring to Qur’an 8:55.  The next time you hear the word Kuffar, it is one of the worst put downs a Muslim can say to anyone.

The followers of Islam also use the word Kuffar to describe their fellow Muslims, in the worst of ways, and is often a precursor to Muslim on Muslim violence.  Like the recent Sunni on Sufi Muslim attacks we just saw in the recent Mosque bombing in Egypt killing 235 Muslims by Muslims  where the Jihadis were screaming Allahu Akbar.  Why you ask? The Sunni Muslims and Shia Muslims have been killing each other for 1400 years because they believe each other to be a Kuffar or Mushrikin.  In this Egypt attack above,     we have Sunni Muslims killing Sufi Muslims who are viewed as Kuffar by the Sunni.  Confused yet?  Keep reading and it will all make perfect sense.

When Muslim Advocacy groups like CAIR, ISNA, MSA, tell you  Jihad is a personal spiritual struggle like losing weight or doing daily chores,  it is a deception of the most clever kind.  Spiritual Jihad is a deception because Mohammed said in  Qur’an 9:111 that those who fight in the way of Allah are assured paradise.

In Islam, getting into paradise is not guaranteed.  Mohammad says violent Jihad in the advancement of Islam will guarantee you a place in the highest levels of paradise.  That makes dying in the way of Jihad a noble religious act and taking as many Kuffar with you assures ones place in paradise or Jannah.

Killing oneself in the act of Jihad brings honor upon your family, tribe, and village.  Mohammad says the dead Jihadi can intercede for 70 of his family members assuring them all a place in paradise.  For the followers of Islam, this  is such a big deal parents of Jihadis often celebrate when their children die in Jihad.  Yes – you heard me right – parents celebrating the death of their own children.

The arabic word for a Jihadi Martyr is Shaheed and garners instant respect in the Muslim world.  This is why a devout Muslim parent will sometimes encourage their children to martyr themselves.  Here in the West, our immediate response is, that can’t be true because its so evil!  In the eyes of a follower of Islam becoming a Jihadi martyr is a spiritual religious act displaying ones love for  Allah and Islam.  In many cases, the Jihadi believes they are showing love for their non-Muslim victims who are living a sinful life by not reverting back to Islam.  The Jihadi, in Mohammad’s teachings is keeping these Kuffar from living a sinful life,  killing them is seen as an act of love.

Islamic apologists will say, “So why aren’t the worlds 1.3 billion followers of Islam going Jihadi and jumping on the Martyr death train securing their place in Islamic paradise?”

Mohammad was clever and knew not every follower of Islam is a warrior ready to die for Allah.   So Mohammed taught there is Jihad with your money, Jihad with your pen, civilizational Jihad in non-Muslim lands, and the personal Jihad of losing weight or to stop smoking.  If a follower of Islam does not tell you the entire meaning of Jihad, they are willfully lying and you should be offended because they think you are stupid.

What you don’t hear about is the large number of Muslims who want to leave Islam but are afraid they will be killed as apostates.  Islamic law states, leaving Islam is a traitorous act and death is the punishment. Many scholars say the apostate loophole is the glue of fear holding Islam together.

Dar al-Islam is the name for those territories where Islam dominates and submission to Allah is observed. Key point:  Dar al Islam is the only place where followers of Islam believe peace and tranquility reign.

The definition of a true Islamic Peace is a countries complete submission to Allah and the Shariah Islamiyya (Islamic Law).

Dar al Harb  means anyplace on earth that fails to follow Allah’s will.  These countries, including the United States, are not considered legitimate powers because they don’t derive their authority from Allah.

The confusing duplicity is that Islamic governments (Dar al Islam) are allowed to enter  into temporary peace treaties with people of Dar Al Harb(Harbis) to facilitate commerce, one sided immigration flows, or alliances against other Islamic Countries if necessary.

Are you confused?  If not you should be because this Eastern logic is the exact opposite of standard Western thought and geopolitics.

For a follower of Islam, the Shariah is the “way of life”.  In Arabic Shariah means the straight path to the watering hole.  For the desert dweller, water is life.

Side Note: For those of you who say Shariah Law, Arabic speakers hear ‘Law Law’ and inwardly laugh at you as an ignorant infidel Kuffar – no offense it just is.

Shariah provides the legal framework for the functioning of an Islamic society, it also details moral, ethical, social and political codes of conduct for Muslims on both an individual and collective level.

Now that you know  Shariah is from Allah and Mohammad you know it is considered timeless and of divine origin to the followers of Islam. The punishments in Islamic Law apply to non-Muslims too,  giving you another clue exposing its Islamic supremacy.

Internalize this,  Shariah is from Allah and is superior to all man made laws and religions like, Capitalism, Communism, Socialism, Humanism Christianity, Judaism, Taoism, Hinduism, Agnosticism, Paganism, Democracies, Republics, US Constitution, US Bill of Rights, Constitutional Monarchies, Buddhism, and Unitarian-Universalism to name only a few.

Shariah dictates to the followers of Islam how to pray, run an Islamic government, brush your teeth, what to wear, how many wives you can marry, exact legal penalties from death sentences, chopping off of body parts,  blood money for murder, death sentence for gays, what you can say and not say, what you can and can’t listen to, and how to behave in the land of Dar al Harb / Non-Islamic countries.

Shariah teaches that when the followers of Islam are weak, or small in number, then one must follow the rules and laws of the non-Islamic country they live in.  As the followers of Islam’s numbers increase,  Muslims begin to demand accommodations for Islamic culture, dress, food, and religion especially  when they conflict with the host countries culture and man made laws.

This is the stage we are at here in America.  The followers of Islam are trying to push Hate Speech laws on Americans as a vehicle to silence our Freedom of Speech,  using our man made legal system to do it.  Why you ask?  Because Islamic Law dictates it is a capital offense to speak negatively about Islam, Mohammad, or Allah.  That is why Muslim Advocacy groups go unhinged if a non-Muslim explains what Islam is and what Islam is not – like I’m doing here.

When you see people throwing around charges of Hate Speech against those speaking freely and legally about Islam – they are enforcing Shariah blasphemy laws on you, in violation of Article 6 of the US Constitution.

Lets Recap – What We Learned

Conclusion:  The Duality of Islam

We’ve learned 5 Important Arabic words and concepts today that have opposite meanings to the Muslim and Non-Muslim alike.

Most Muslims are so nice and integrated here in America , yet other Muslims target and kill non-Muslims in the name of Islam while screaming Allahu Akbar. Two opposites like this are perfectly normal to the followers of Islam.  As long as you are confused, blind, or don’t believe it – then you are right where the Jihadis want you.  Think about that for a second – go ahead read that last sentence again.

Each time a follower of Islam executes a violent Jihadi operation, we can count on the America Muslim advocacy groups like CAIR to say, “These terrorists don’t represent Islam”, yet when these terrorists are screaming Allahu Akbar we know its being done in the name of Islam.  Manufactured mixed messaging is meant to confuse and paralyze the victims of Jihad.  For example,  CAIR always  says after Jihadis kill, “this is not my Islam or we fear a backlash after  most every terrorists attack.”  Nihad Awad executes this black propaganda play like clockwork.  The good  news  is people are growing tired  of CAIR’s lies and arrogance.

Islamic dualism is hidden by religion. The “good” verses of the Meccan Koran cover the verses of jihad in the Medinan Koran. Thus religious Islam shields political Islam from examination.

Scientific analysis shows us that there is a political Islam as well as a religious Islam. To argue about religion is fruitless, but we can talk about politics. We need to discuss political Islam, a system of ethical and political dualism.”

The Communists Begin Their Purge in America