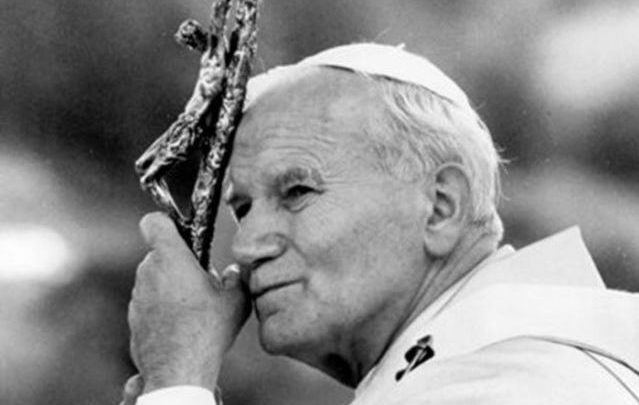 “I see the Church afflicted by a deadly scourge. Deeper, more painful and more deadly than those of this millennium’, referring to … communism and Nazi totalitarianism. It’s called islamism. They will invade Europe. I saw the hordes coming from the West to the East.”

But in public, the Pope was kissing the Koran and sucking up to the Muslim world. 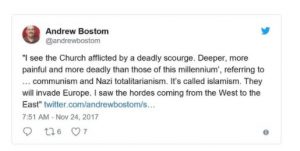 Bienno, Italy, November 23, 2017 (LifeSiteNews): A close friend of Saint John Paul II has affirmed that the late pope, revealed to have been a mystic, told him that Europe would be invaded by Islam.

Speaking to a large group at the hermitage of “Saints Peter and Paul” this past October, Monsignor Mauro Longhi of the Opus Dei prelature recounted a conversation he had with the late pontiff in March of 1993 on one of their many hiking trips in the mountains. Having got ahead of the rest of their companions, Longhi and St. John Paul took a sandwich break.

In video footage of the October talk, Longhi is heard saying that he noticed that the saint’s hands were trembling. (John Paul’s Parkinson’s disease had not yet been revealed in 1993.) The pope noticed the then-young man’s gaze.

Longhi jumped in to say, “But, no, Holiness, you are young.”

Longhi continued: “Then Wojtyla changed tone, and making me privy to one of his night-time visions, told me, ‘Tell this to those whom you will meet in the Church of the third millennium. I see the Church afflicted by a deadly scourge. Deeper, more painful and more deadly than those of this millennium’, referring to … communism and Nazi totalitarianism. ‘It’s called islamism. They will invade Europe. I saw the hordes coming from the West to the East’, and he described to me the countries one by one: from Morocco to Libya to Egypt, and so on to the eastern parts. The Holy Father added, ‘They will invade Europe, Europe will be like a cellar, old relics, shadowy, cobwebs. Family heirlooms. You, the Church of the third millennium, will have to contain the invasion. Not with armies, armies will not suffice, but with your faith, lived with integrity.’ ”

According to La Nuova Bussola Quotidiana, which broke the story in Italian, Longhi is a “priest above suspicion,” having “enjoyed the personal esteem not only of John Paul II but also of Benedict XVI, so much so that in 1997 he was called to the Vatican dicastery of the Congregation for Clergy.” Between 1985 and 1995 Longhi, who was ordained in 1995, accompanied John Paul II on his skiing and hiking trips, hosting him at Opus Dei’s summer home in Abruzzo, which at the time was only “a simple house in the countryside.”