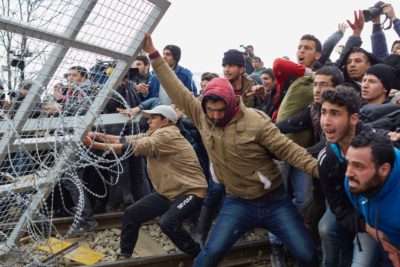 The US decides — that is called sovereignty. The “rights” of invaders do not supersede the rights of American citizens.

US quits UN global compact on migration, says it’ll set its own policy

(CNN)The United States notified the United Nations that it will no longer take part in the global compact on migration, saying it undermines the nation’s sovereignty.

The US has been a part of the New York Declaration for Refugees and Migrants since it was formed last year. The declaration aims to ensure the rights of migrants, help them resettle and provide them with access to education and jobs.

It calls for the negotiation of a global compact on migration, which is expected to be adopted next year.

In explaining its withdrawal Saturday, the US said the pact contains provisions that are inconsistent with the nation’s immigration policies.
While the US is proud of its leadership on migration and refugee issues, the global approach is not compatible with the nation’s sovereignty, according to Nikki Haley, the US ambassador to the UN.