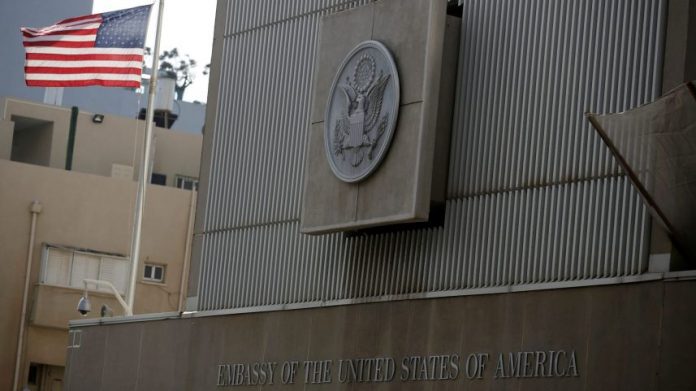 Abbas warns the contentious move will have ‘dangerous consequences’ ■ Abdullah, Abbas vow to act in coordination ■ Israeli ministers instructed by White House not to speak publicly about the crisis

U.S. President Donald Trump informed Palestinian President Mahmoud Abbas and Jordan’s King Abdullah that he plans to move the U.S. Embassy in Israel from Tel Aviv to Jerusalem on Tuesday, according to Abbas’ spokesman and Jordanian reports. Trump also called Egyptian President Abdel-Fattah al-Sissi to inform him of the decision.

Abbas warned Trump in response that the action will have “dangerous consequences,” says Abbas spokesman Nabil Abu Rudeineh.  Abu Rudeineh said “the Palestinian stance is determined and steadfast – there will not be a Palestinian state without East Jerusalem as its capital according to decisions by the international community. Abu Mazen [Abbas] is now holding an emergency meeting in his bureau following the phone conversation with Trump.”

According to Jordanian reports, Abdullah also warned Trump of the decision’s repercussions on Middle East security and stability. He reportedly pledged he would thwart any American initiative to renew the peace process and would encourage resistance among Muslims and Christians alike.

In the West Bank, the Fatah movement has begun preparations for marches and rallies following Trump’s announcement. Heads of Palestinians factions in the West Bank are slated to hold a meeting later Tuesday evening to coordinate protest moves.

A senior Fatah official told Haaretz that “the Palestinian Authority is interested in carrying out marches of rage and protest, but there’s no intention to break the rules or lead to a frontal confrontation with Israel like the one that took place during the Second Intifada.”

Following their conversations with Trump, Abdullah and Abbas reportedly spoke and decided to act in complete coordination following Trump’s decision.

Meanwhile, Israeli ministers were instructed on Tuesday not to speak publicly about the embassy crisis, at the request of the White House.

On Tuesday, an Abbas aide commented that if the Trump Administration decides to recognize Jerusalem as Israel’s capital, the Palestinian leadership would sever ties with the U.S. administration.

A senior administration official said last week that Trump would likely make the announcement to recognize Jerusalem as Israel’s capital on Wednesday, a decision that breaks with decades of U.S. policy and could fuel violence in the Middle East.

The Trump administration announced Monday that it had not yet reached a decision yet on whether or not to move the U.S. Embassy to Jerusalem, despite the fact that Monday was the legal deadline to sign a presidential waiver on the matter.

Nabil Shaath, a senior Palestinian official, had especially harsh words for Trump Tuesday before news of the embassy move, saying “the mother of all the deals dies here on the rocks in Jerusalem if he says tomorrow that he recognizes a united Jerusalem as the capital of Israel.” On Saturday, Hamas leaders called for a popular uprising to thwart the ongoing “conspiracy.”

Turkish President Recep Tayyip Erdogan said on Tuesday that if Trump goes ahead with the decision, Turkey will cut diplomatic ties with Israel. He added that Jerusalem is “a red line for Muslims.” Israel responded that “Jerusalem has been the Jewish capital for 3,000 years.”

Egypt has warned of “possible dangerous repercussions” if U.S. President Donald Trump follows through on plans to recognize contested Jerusalem as Israel’s capital.

Egypt’s Foreign Ministry said Tuesday that Egyptian Foreign Minister Sameh Shoukry had discussed the matter with his French counterpart. It said they called on the Trump administration to wait and reconsider.

According to Saudi media, an official source at the Saudi Foreign Ministry said that Trump’s potential recognition of Jerusalem as Israel’s capital would have “very serious implications” and would be seen as “provocative to all Muslims’ feelings.”

Arab League Chief Ahmed Abdoul Gheit said Tuesday that any step changing Jerusalem’s status quo would be a “dangerous measure that would have repercussions” throughout the Middle East. He encouraged Trump to reconsider his decision.

EU Foreign Policy Chief Federica Mogherini said that any action would undermine a two-state solution, and must be avoided. She added that Jerusalem must become a joint capital for both Israel and the Palestinians.

After a call with Trump on Monday, French President Emmanuel Macron expressed concern that the U.S. president “would unilaterally recognize Jerusalem as the capital.” He stated that the Jerusalem issue must be dealt with “in the framework of peace negotiations between Israelis and Palestinians.”

German Foreign Minister Sigmar Gabriel said on Tuesday that a solution regarding Jerusalem’s status “can only be found through direct negotiations between the two parties,” adding that “anything that escalated the crisis during these times is counterproductive.” He further took a stab at Trump, saying that “there is a limit in our solidarity” regarding U.S.-German relations in light of the decision.

Twenty-five former Israeli ambassadors, academics and peace activists on Monday expressed their opposition to Trump’s potential unilateral recognition of Jerusalem as Israel’s capital. “We are deeply concerned by recent reports that President Trump is seriously considering the announcement of his decision to unilaterally recognize Jerusalem as the capital city of Israel,” a letter to Trump’s Mideast peace envoy Jason Greenblatt said.