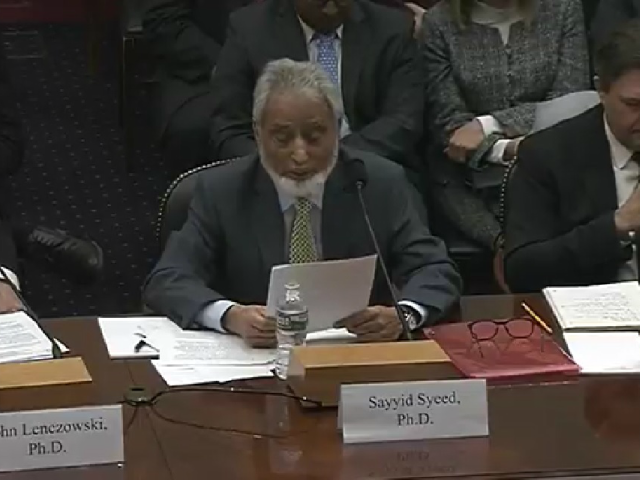 WASHINGTON, DC — An Islamic charter drafted by Islam’s Mohammad is consistent with the religious freedom provisions enshrined in the U.S. Constitution, a senior official from the terror-affiliated Islamic Society of North America (ISNA) argued before a House panel.

“The essence of Islam can be summarized as those who protect and promote religious freedom,” asserted Dr. Sayyid Syeed, a senior advisor for ISNA’s office of interfaith and community alliances, in written testimony provided under oath to the House Foreign Affairs Subcommittee on Global Human Rights during a hearing Wednesday.

[Mohammad] chose to move to a city where he invited representatives of different tribes, Aws, Khazraj, immigrants from Mecca, and several different Jewish tribes and jointly with all of them drafted a constitution of [the Medina] state where all the participating entities were given freedom to practice their religions and collectively be responsible for the welfare, safety, [and] security of the new state.

This [Medina] constitution has served as a reminder for us [American Muslims] as a forerunner for the United States’ constitution giving us individual rights and freedom of religion.

The GOP-controlled House panel invited an official from the organization to testify about steps the United States can take to advance human rights to combat Islamic extremism.

During his testimony, Dr. Syeed compared the U.S. Constitution to Mohammad’s Medina charter, which regulates the payment of “blood money” (a fine for shedding blood to families of the victim) and the ransoming of captives.

“The believers [Muslims] must avenge the blood of one another shed in the way of God,” declares the charter, later adding, “A woman shall only be given protection with the consent of her family.”

Referring to the Medina charter, a website maintained by Oxford University Press notes,“The term ‘constitution’ … is a misnomer, because the treaty mainly deals with tribal matters such as the organization and leadership of the participating tribal groups, warfare, blood-wit, the ransoming of captives, and war expenditure.”

Syeed and other analysts contend that the Medina charter promotes religious freedom.

American Muslim community is the only Muslim community in the world that has lived in a democracy with a constitutional commitment to freedom of religion, highlighting the essence of Islam and promotion of Human Rights. There have been times when hatred against Islam has resulted in dangerous acts of violence and intolerance. But it is in those moments of challenge we have experienced the highest level of support from other faith groups denouncing hate against Muslims in the name of religion.

Unlike Dr. Syeed, experts like Ayaan Hirsi Ali of the Hoover Institution think tank believeIslam is “fundamentally incompatible” with the U.S. Constitution and the overall “foundation of the American way of life.”

Ali, an honor violence victim, a strong advocate against female genital mutilation (FGM), and author, testified before the Senate Homeland Security and Government Affairs Committee, saying, “My central argument is that political Islam implies a constitutional order fundamentally incompatible with the US Constitution and with the ‘constitution of liberty’ that is the foundation of the American way of life.”

“Let it be said explicitly: The Islamists’ program is fundamentally incompatible with the U.S. Constitution, religious tolerance, the equality of men and women, the tolerance of different sexual orientations, the ban on cruel and unusual punishment, and other fundamental human rights,” she added.