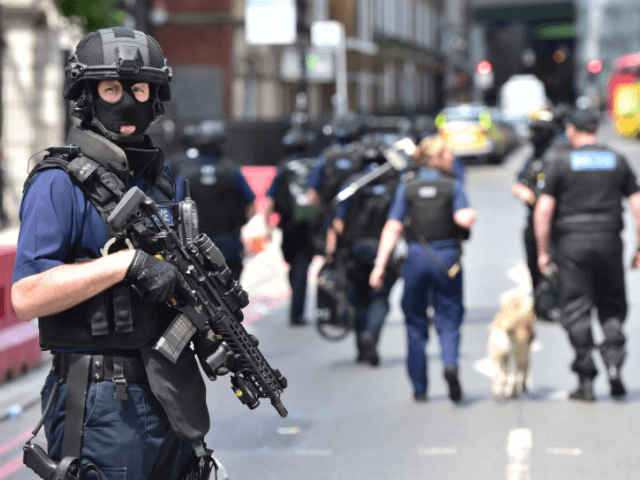 The number of arrests for terror-related offences in the UK has hit a record annual level, new statistics reveal.

In the year until the end of September 2017, a total of 400 people were held for terror-related offences in Britain, the highest number since records began in 2001 and a dramatic rise of 54 per cent compared to last year.

The figure includes 12 arrests made in connection with the Westminster attack, 23 after the Manchester bombing, 21 linked to the London Bridge attacks, and one after the Finsbury Park attack.

According to Sky News, there was also the highest ever number of female terror-related arrests, with 58 women and girls held.

There have been a number of successful Islamic fundamentalist attacks this year, including a van and knife strike at London Bridge, a suicide bombing at the Manchester Arena, and a partially-detonated bomb at Parsons Green station on the London Underground.

This Wednesday it was reported that an Islamic extremist plot to kill the Prime Minister had been thwarted, and a man was charged with sharing Islamic State themed images of Prince Geroge to encourage an attack on the Royal Family.

Security Minister Ben Wallace explained that police and security services “have been clear that we are facing a shift rather than a short-term spike in the terrorist threat”.

He added: “The statistics we are publishing today demonstrate the breadth of work that they undertake, alongside the rest of the criminal justice system, day in and day out to keep us safe.

“But this is not the totality of our work. The whole of society must come together to challenge the terrorist threat. 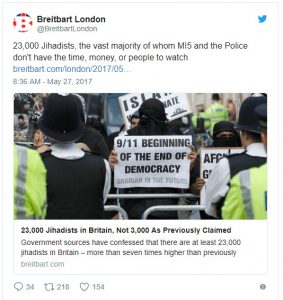 “The public must remain alert but not alarmed and report any suspicions they have about unusual activity or behaviour to the appropriate authorities.

“Furthermore, the government is reviewing its counter-terrorism strategy in light of recent attacks to ensure we meet the threat from terrorism now and in the future.”

The Islamic extremist threat to the UK is at an unprecedented scale and has increased “dramatically” over the past year, MI5 Director-General Andrew Parker revealed last month.

“In 2017, with all that has happened and much that has not, it is clear that we are contending with an intense UK terrorist threat from Islamist extremists,” he said in a rare public speech.

“That threat is multi-dimensional, evolving rapidly, and operating at a scale and pace we’ve not seen before… We’ve seen a dramatic upshift in the threat this year. It’s at the highest tempo I’ve seen in my 34-year career.

“Today there is more terrorist activity, coming at us more quickly, and it can be harder to detect,” he said.

Adding: “Islamist terrorism is an acute and enduring challenge that requires a sustained and comprehensive approach.”