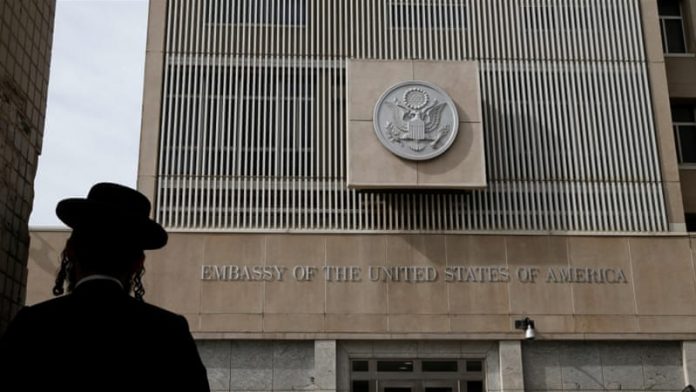 When President Donald Trump announced that the United States would move its embassy from Tel Aviv to Jerusalem, the Muslim world reacted with outrage and threats. Palestinian Authority President Mahmoud Abbas warned of “dangerous consequences.” The spokesman for Turkish president Erdogan warned that the move was a “grave mistake” because “Jerusalem is our red line.” Bekir Bozdag, the Deputy Prime Minister, said the move would plunge the world “into a fire with no end in sight.” And Saudi Arabia’s King Salman warned that the move “would constitute a flagrant provocation of Muslims all over the world.”

The leaders of the Western world reacted in similar fashion. Pope Francis, British Prime Minister Theresa May, German Chancellor Angela Merkel, and French President Emmanuel Macron all criticized Trump’s announcement. Meanwhile, the patriarchs and heads of the local churches in Jerusalem sent a letter to President Trump warning that the transfer of the embassy “will yield increased hatred, conflict, violence, and suffering in Jerusalem.”

But there is an obvious contradiction here. As Jihad Watch editor Robert Spencer points out in a recent column, these leaders have a record of defending Islam as a religion of peace and tolerance, which is being perverted by only a handful of extremists. Pope Francis, for example, has said that “authentic Islam and the proper reading of the Koran are opposed to every form of violence.” On another occasion he drew a moral equivalence between Islam and Catholicism, saying, “If I speak of Islamic violence, I must speak of Catholic violence.” For over a decade now, various Church leaders and secular leaders have assured us that violence has nothing to do with Islam.

But if that’s what they really believe, why should they worry that moving an embassy would create – to quote from the letter of the church leaders in Jerusalem – “hatred, conflict, violence, and suffering.”

By assuming that Muslims would riot over the announcement, says Spencer, the pope and other leaders are inadvertently admitting the truth about Islam: “that the numerous incitements to violence and hatred in the Quran and Sunnah do tend to lead to Muslims behaving violently at the drop of a hat, or the move of an embassy.” After all, we are not talking here about a tiny minority whose actions would be rejected by the great majority, but about widespread rioting and violence on a global scale – “plunging the region and the world into a fire with no end in sight,” as Turkey’s Deputy Prime Minister put it.

And, apparently, the “fire” would be justified because, as King Salman said, the move “would constitute a flagrant provocation of Muslims all over the world.” It’s a safe bet that King Salman understands Islam better than do Merkel, Macron, May, and the Holy Father. Yet he is even more concerned than they.

He seems to assume that Muslims are highly prone to violence. He understands that they are easily provoked because their religion and their religious leaders tell them to be. Moreover, as he must know, almost anything might be considered provocative. Last July, a “day of rage” resulting in the murder of an Israeli family was called because metal detectors had been installed on the Temple Mount as a security measure. Even Pope Benedict’s measured address to an academic gathering at the University of Regensburg led to global rioting and killing.

There is no end to the number of things that offend Muslims. This, along with numerous other differences, should lay to rest the quaint notion that there is a moral equivalence between Islam and Catholicism. They are very different faiths. No one worries about global rioting should Catholics be offended by a slight to their faith. Yet if any group has cause to riot, it is Catholics and other Christians. Christians in many parts of the Islamic world face daily persecution and even extermination. They are beaten, raped, and decapitated, and their churches are burned to the ground.

So on the one hand, Muslim believers are ready to commit mayhem over an academic talk or the moving of an embassy, and on the other hand, Christians remain peaceful even though their brethren are being slaughtered and burned alive. How much longer, one wonders, will Church leaders collaborate in the false assertion that Islam and Christianity are equally peaceful faiths?

Religious and secular leaders are caught in a flagrant contradiction. They tell us that Islam is a religion of peace and justice, yet they warn us not to provoke its followers in any way. Don’t recognize Jerusalem as Israel’s capital. Don’t draw cartoons that might offend Muslims. Don’t wear religious symbols that might provoke them. Cover your women and your statutes. Don’t ring church bells in the vicinity of Muslims. Don’t criticize them for persecuting Christians because, as Ahmed al-Tayeb, the Grand Imam of Al-Azhar University told Pope Francis, such criticism is a “red line” that must not be crossed.

“Just stay quiet and you’ll be okay.” That’s what Mohamed Atta told the passengers on American Airlines flight 11 shortly before it flew into the World Trade Center. It wasn’t good advice then. And it’s not good advice now. As Islam expands its global reach, it’s becoming increasingly evident that the “don’t-do-anything-to-provoke-them” policy isn’t working, and never will.

Biden Picks an Anti-Semite to Deal with Jews